‘I Was Removed From Class, Saw My Dad Struggle’: 31-YO’s Free School is Building Dreams 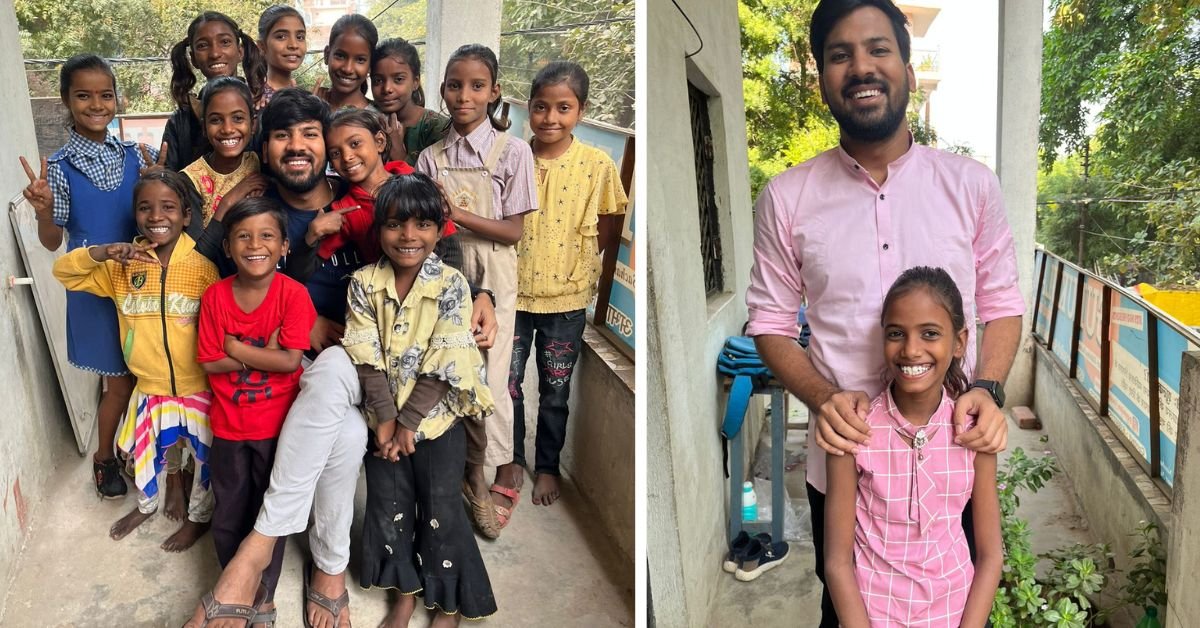 Uddeshya Sachan's Gurukulam is a Khushiyon Wala School that has helped 400 kids learn life lessons along with music, math and more.

Uddeshya Sachan grew up in Kanpur, watching his father, a tailor, frown over the accounts book as the month end drew near, calculating if they had made enough money to pay his son’s school fees.

When he was in class 6, the money ran out, and he had to be taken out of school.

“This incident changed me,” Uddeshya (31) tells The Better India. “My studies had to stop and I was never able to forget this.”

Years later in 2019, he went on to start a unique initiative called Gurukulam — Khushiyon Wala School (school of happiness). True to its name, this school is a place where children learn life lessons.

“I wanted to do my bit for the world.”

Following the class 6 incident, Uddeshya’s life took a brighter turn when his father’s business picked up. He was re-admitted to a different school where he continued his education.

He did not stop at school and even went on to college where he graduated in philosophy. He says his middle-class family was elated.

“They wanted me to get a well-paying job and settle down, but I always felt underconfident. I didn’t think I had the skills to work and neither did I want to join the crowd who runs behind things in life. I saw the world as a very unhappy place,” he says adding that this way of thinking shaped his idea to start Gurukulam.

“Children are usually taught only how to succeed. But, I wanted to also teach them how to enjoy life,” says Uddeshya.

So in 2019, with a class of five children belonging to the nearby slum and a whiteboard, he began teaching in a rented room. Today, the humble number has grown to 150 kids, who say they love coming to school.

While at first glance the school may seem a regular one with a board and students, a closer look will tell you it’s a completely different world.

At the Gurukulam school, the modus operandi is simple — no mugging concepts.

“Children need life hacks to survive in the world,” says Uddeshya. “We teach them these at the school and also introduce them to different books. The older kids share their life learnings with the younger ones, and one such class topic was how to get over a breakup!”

The school has opened its doors to 400 kids to date, says Uddeshya, who is joined by three teachers and several older kids, who after completing their time at Gurukulam volunteer in the school to share insights on different topics like science, maths and music.

A regular school day in Gurukulam begins with a yoga session at 5 am that the older kids attend. This is followed by an hour of meditation, after which they return to their homes and come back at 8 am when they are joined by the younger kids.

“The syllabus is tailored according to the age group being taught. They learn through movies, theatre, news, science videos, documentaries, etc. We even hold discussions on various topics. It’s a very homely environment,” shares Uddeshya. The students go home at 2 pm and return at 4 pm when the learning continues; the day ends at 5 pm.

Radhika, one of the students, says that she likes the learning environment the most. “We learn so much without anyone forcing us to do it.”

Another child Shiva says the place feels like home. “I have learnt to play the basuri (flute) here and enjoy making my own tunes. There’s always something new to learn or do here,” he says.

Don’t the kids miss out on regular school in the process?

“Most of these kids don’t go to school at all as they are from bastiyaans (slum). Some of them are orphans and Gurukulam is where they find friends,” says Uddeshya adding that if a child who goes to regular school wishes to join, they are welcome after their school timings.

What started out as a single-room initiative now has eight rooms gratis an ed-tech platform that took an interest in Uddeshya’s work and funded the venture.

Around the “campus”, one will find musical instruments such as harmonium and flute, and a couple of TVs — media through which lessons are conducted.

However, in spite of an inspiring initiative, Uddeshya says it has been tough to set this up.

“I’m from a middle-class family, who never want to take risks. They want their child to succeed before trying to help anyone else. So, convincing them was a task. To add to this, we rely on donations and people are not always very willing to contribute,” he says.

But, he adds that these problems never dimmed his spirit. He continues to peddle the promise he made to himself all those years ago, in spite of all the hardships.

As Uddeshya switches the alarm off at 5 am every morning, ready for another day at school, he calls it the best feeling in the world.

“One day, Gurukulam’s name will spread around the world as the school that teaches people lessons for life. I was removed from school, and so, I created a school that is for anyone and everyone.”