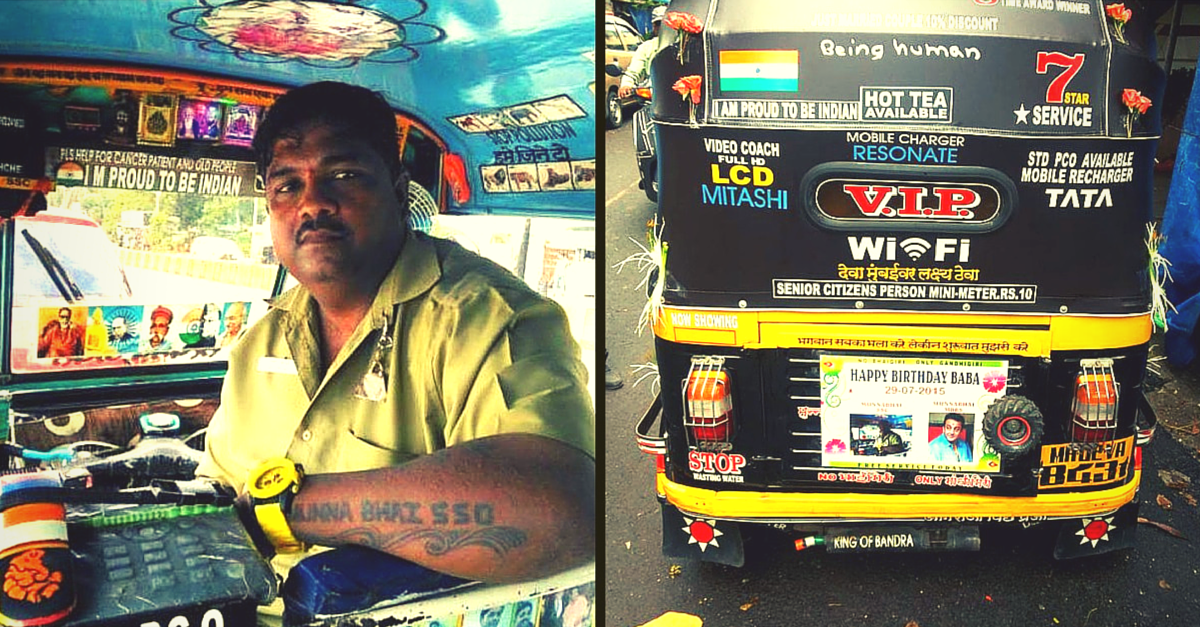 Sandeep Bacche, a.k.a Munnabhai SSC, owns an autorickshaw equipped with a telephone and WiFi connection, an LCD screen, and water and tea for the riders. But it is not what he owns but what he does with this auto rickshaw that will have you floored. Read on!

Sandeep Bacche is known in Mumbai as the auto driver with the coolest vehicle in town. His rickshaw is equipped with a telephone connection, a newspaper and magazine stand, a WiFi connection, a fire extinguisher, some hot tea, an LCD screen, drinking water, pictures with celebrities, and lots more.

His story however, is not that of the person who owns a luxury auto rickshaw; his story is that of a philanthropist who owns a heart of gold.

While the auto is what strikes the eye first, there is so much more that goes on behind the scenes, which is what makes a ride in his vehicle so special. Sandeep, who lost his mother to cancer, has a donation box for cancer patients at the back of his rickshaw. Then there is a sticker outside his auto which clearly states that he donates Rs. 2 from every fare amount that he receives. Once every month, he gives this collection to the Tata Memorial Hospital and Mount Mary church in Mumbai.

But this is not all that Sandeep Bacche does.

He arranges help in the form of money, clothes and food, for needy cancer patients and those suffering with kidney ailments. On Sundays, he can be found distributing breakfast among cancer patients in authorised homes in Mumbai, or hospitals like the Tata Memorial Centre. He also goes door to door, collecting clothes from homes, which can be helpful for these patients. He sometimes also asks the donors for financial help, for which he takes the patients and their families along.

With a first aid box installed in his rickshaw, Sandeep also dresses the wounds of people hurt on the road. “If I come across such people at traffic signals, I clean their wounds and help them bandage it,” he says.

How does he come to know about cancer patients who need help? Most of the time, it is through his visits to authorised homes like the one in Bandra and to the Tata Memorial Hospital. Because he is well known for his work, the news has been spreading through word of mouth as well. People who have met him share his details whenever they find someone in need. “As I have gained some popularity because of the internet, many people in hospitals have also given my number to one another, in case somebody needs help.”

Right now, he is helping a lady who has lost both her kidneys. Her husband will be the donor in her operation. This couple is already being helped by a trust to meet the cost of the operation, but other than that, they still need around Rs. 35,000 for additional check-ups, which Sandeep is helping them arrange.

Moreover, a sign on his auto says: “Any problem, call Munnabhai SSC.” He is a huge fan of Sanjay Dutt and his film Munnabhai MBBS, and has cleared his SSC board exam, hence the name.

Sandeep is 38. He grew up in extreme poverty and completed his education up to class 10 in 1995. After this he started working in a travel agency as a peon. It was while he was doing this job that he came across a bus which was well equipped with luxuries like a TV set, WiFi connection, etc. Sandeep decided that if he ever owned a vehicle in his life, it would have similar features.

The travel agency he worked in moved abroad after a while. Sandeep received a PF amount of Rs. 35,000 from this job, with which he then purchased the auto rickshaw. Five years after this, his mother was diagnosed with stage 3 throat cancer. At this time, Sandeep was still working as a driver, and his father had retired. The family could not afford the treatment. He used to spend his days trying to find some source to arrange for the money. But there was nobody who was ready to help him. His mother could not be saved. During this time, he had come across actor Sanjay Dutt, who had helped him with a small sum.

“My mother could not be saved, but that action made me think about how a famous personality like him helped a person like me in a time of need,” recalls Sandeep.

This whole journey of trying to arrange for funds for his mother made Sandeep want to help all those people who might be in a situation similar to his. He says he tried joining some charity organizations too but was rejected because he is an auto driver.

Thus, he started doing things on his own, beginning with giving chocolates to children at signals.

“I also put up statuses on my Facebook page asking for help for some patients. But most of the time people think that this is a fake venture. I do not get help every time when I ask for it,” he says ruefully.

Sandeep, who also has to take care of his family, struggles to make ends meet and keeps trying to find ways in which he can take enough money back home and can also continue helping people. “I am an auto rickshaw driver and I earn the same like any other driver. I have no sponsors. I have received eight awards, but never received any money in those. I cannot feed my family just by taking awards and being featured in newspapers.” Hence, to take his cause forward without any hindrances, he charges extra when people call him up for a ride on special demand.

As he is pretty famous in the city, he usually gets calls by people on different occasions and, in such cases, he charges a fixed extra amount that people are happy to give.

That’s Sandeep—the auto driver who happily gives discounts to people with disabilities, pregnant women, and senior citizens. He also offers free rides all day on his birthday, which falls on 31st December, and discount rides on many different days of the year.