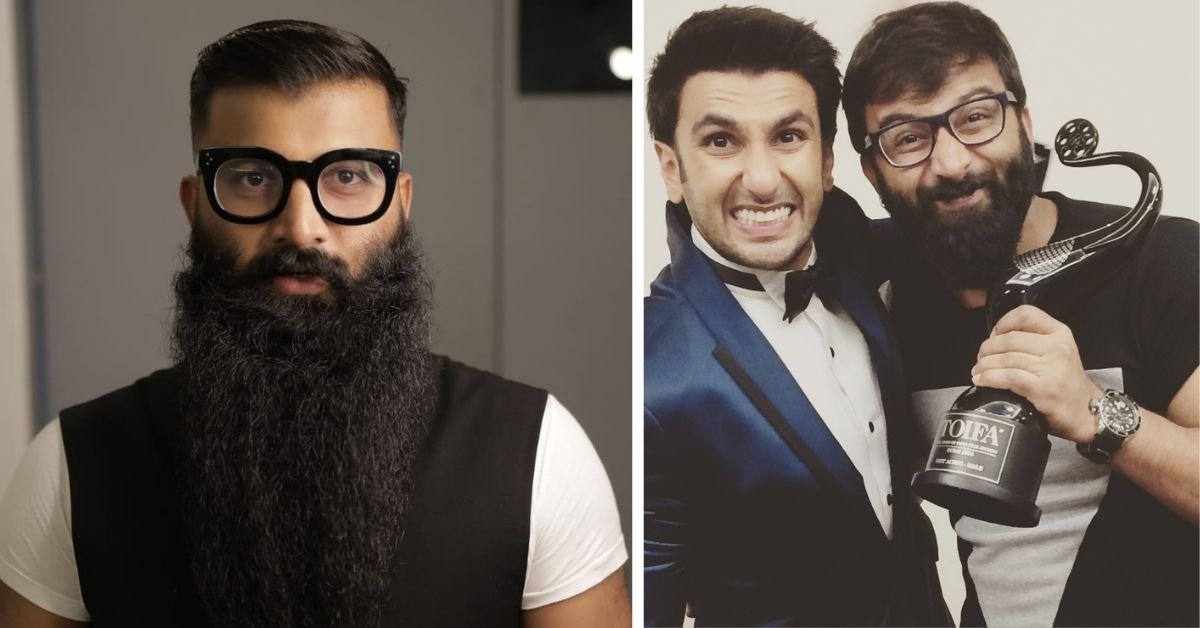 Coming from a small town in Maharashtra, Darshan Yewalekar has worked on several Bollywood projects over two decades and has styled some of the biggest stars like Ranveer Singh, Salman Khan, Ranbir Kapoor and Saif Ali Khan.

“My beginnings are humble, to say the least. A family of three, my parents worked extremely hard to provide for me and ensure that I had a comfortable life. Growing up, all I knew of the outside world was what I saw on our 11-inch television set at home. I had no first-hand exposure and all my experiences came through watching movies and shows,” Darshan Yewalekar, a noted hairstylist in the Indian film industry tells The Better India.

While the script, acting, set design, costumes, music and choreography in a movie are often spoken about, one tends to forget the importance that a hairstylist plays in making a character come alive. Whether it was Ranveer Singh’s character of Khilji in Padmavat (2018) or his near bald and ponytail look for Bajirao Mastani (2015) – these are visuals that stay with the viewer and add depth and dimension to the character.

Darshan has been part of the film industry for over two decades and says that his training began at home in Bhusawal, Maharashtra, seeing his mother [Anupama] work at her home salon — Mona Lisa.

“Both my parents were extremely hard working, my father [Devidas] had a day job at a bank and would do extra work in the evenings to earn an additional income. I remember a time when he even sold sanitary napkins door-to-door,” he says.

His family still lives in Bhusawal and are excited to see his name in articles and being mentioned by stars.

“When I started doing well I had to train them to feel happy and spend the money,” he says, adding, “They only knew how to save.”

After Darshan completed his Class 12 examination he says there was an “itch” to move out from the small town and experience city life. He describes himself as an average student and remembers the time when he received admission to study aeronautical engineering in Pune. The fees that the course needed was way beyond what his family could afford. “As a compromise, I had enrolled for a course in microbiology but my heart wasn’t in it. My parents saw this too and asked me if I wanted to take up a course in hairstyling.”

‘I was travelling in a lift for the first time.’

Enrolling in a hairstyling course in Pune at the age of 16 was the turning point for Darshan. “Only when I started attending the classes did I realise how much I enjoyed the craft. Also, being in the big city on my own added to the excitement,” he says. Darshan recollects how he felt when he entered the lift in the building for the very first time.

“Until then I had never travelled in a lift and the fact that the place was air-conditioned was so new and fascinating for me,” he shares.

While the course was for six months Darshan was lucky that his talent was spotted early on and he managed to finish in half the time. “By the end of those three months, I was already on the floor taking on my clients and learning on the job. Every day was exciting and each person I worked on was like a new canvas for me,” he says.

During the course, an assignment took Darshan to Indore and he was paid Rs 2,005 for it. “It was around Diwali and the only way I knew to celebrate was by eating mithai (sweets). So, I went to a sweet shop, bought 1 kg of sweets and sat down to eat it all. That was how I celebrated my first salary,” he exclaims.

Once Darshan completed his course he undertook an assignment in Mumbai and stayed with the same brand for over eight years.

And that is just what he did.

‘I want to wake up each morning and outdo myself.’

Darshan says that the most exciting part of being in this business is how he gets to work on something new every few months. “It’s challenging and that is something that I enjoy. More and more directors and actors are now open to the idea of experimenting with their hairstyles to give them a completely different look and feel,” he says. He also says that with each project he got he worked on pushing the boundaries and giving the audiences something new.

The years from 2008 to 2012 were filled with struggle — both financial and emotional. “For the longest time when I visited home, I had people who would in a very condescending term call me a naai (barber). They knew I was working with Salman Khan but never understood what I did on the film set every day. They assumed I cut Salman’s hair but didn’t know better.”

Darshan got the chance to work with Sanjay Leela Bhansali yet again for Ram Leela (2013) and says, “One of the first directors who encouraged my constant questions was Sanjay sir. I wanted to understand the character to be able to do justice to the hairstyling assignment in the movie. It wasn’t just about making the characters look good for me.”

Darshan attributes a lot of the success he has today to Ranveer Singh, who, he says, also understood and appreciated the craft that Darshan brought to the characters.

Having worked with Ranveer in over six films, including Gunday (2014), Kill Dil (2014), Bajirao Mastani (2015) and Padmavat (2018), Darshan says, “I have had the opportunity to work very closely with him. Both in movies as well as various editorials. Given how adventurous he is with his looks, working with him has been such a fun collaboration all the way.”

His latest project, 83 (2021), in which Ranveer Singh portrays the role of Kapil Dev, came with its own set of challenges, says Darshan. “This was a film that needed me to unlearn a lot and look at the character microscopically. Here my only brief was to replicate the character – everything from script to dialogue to look was all in place. There was no formula in this, it had to do a lot with my senses and understanding,” he says.

As a word of advice to those keen on taking up hairstyling, he says, “Do not look at it as a profession but as an art form similar to a painting. While there are many painters, only a few of their works get universal accolades. Similarly, being a hairstylist isn’t just about success and popularity but becoming an all-rounded person. This art form helps you grow as a person.”

Darshan is also excited about designing a course on hairstyling for those who might be keen on it. “Hairstyling is so much more than just cutting hair. With my course that is what I wish to help people understand and learn,” he concludes.