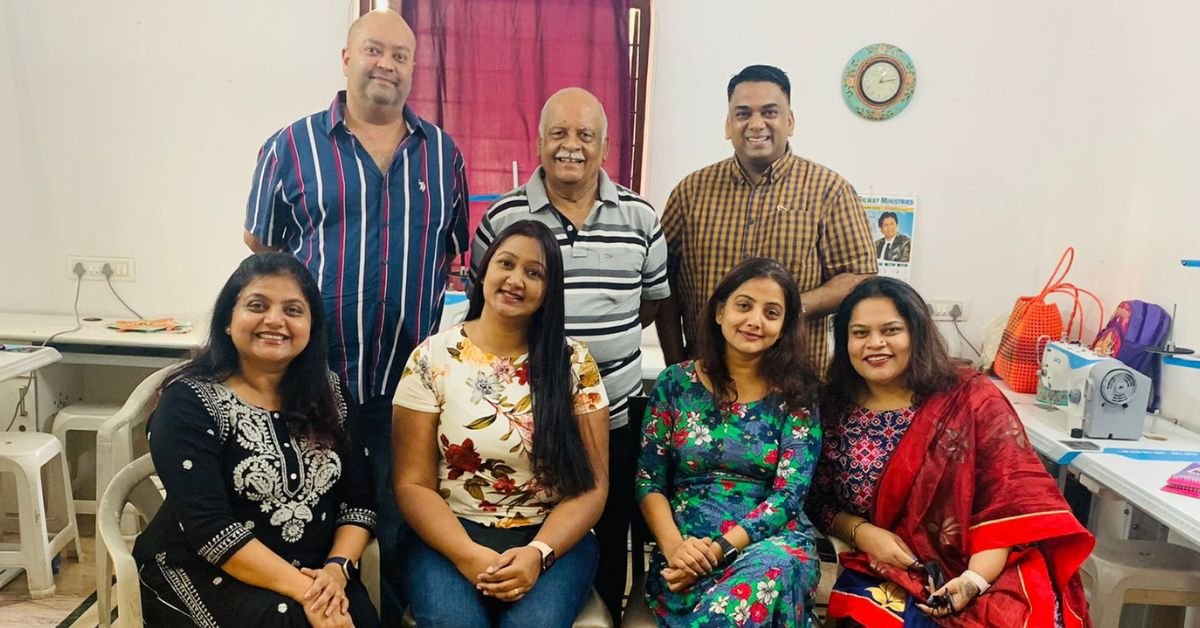 Golden Heart Foundation in Pune came into being because of seven friends who started two community kitchens and skill development centres to help marginalised women.

Pune-based Golden Heart Foundation came into existence in 2015 because seven friends decided that they should use their position of privilege to do some ‘hands-on’ work over an evening out. Dissatisfied with just allocating a portion of money towards doing good, this group decided to take matters in their own hands, quite literally.

From a small beginning, this foundation is now running two community kitchens, feeding over 12,000 every month and is also running two skill development centres where women are taught vocational skills like tailoring, English speaking, basket weaving and beauty courses. This has empowered over 250 women in Pune’s Budhwar Peth and National Institute of Bank Management (NIBM) area.

The Better India caught up with Shehnaz Chawla, the President of the organisation who says, “For me, the seeds were sown many years ago when as a college student I would spend time working with various old age homes and orphanages in Pune. It was that exposure that allowed me to grow my network and keep in touch with people from the social and development sector.”

This experience helped when she, along with her friends — Anmol, Vivian, Sanjeev, Shamim, Rohini and Daniel, started the organisation.

Speaking about how everyone came together, Shehnaz says, “It was the time when Facebook was being touted as the best way to find old friends and I used that to find some of my childhood buddies. A chance online encounter and reconnection with Sanjeev Somani, who was then in Bengaluru, led to us talking about what we were doing and the work we were involved with. Eventually, he moved to Pune and over a casual dinner, we decided we needed to do more than just donate money to charities month-on-month.”

Until then Shehnaz was working with various organisations and had not thought of doing something on her own. The group started with small projects like distribution of ration kits, taking care of the fees for students whose parents were unable to do so and even extending medical aid to the underprivileged. “We would take up these small projects as and when we had the money for it and there was no real structure to our work,” says Shehnaz.

She adds, “It was yet another chance conversation with Panna, a transgender, who was a sex worker in Budhwar Peth, that led to our understanding of how grave their situation was. The aged members of the transgender community would, on several occasions, go hungry and not be able to get themselves even one square meal a day. Her story moved us so much that we saw the need to start a community kitchen was dire. That was the first major project we started with.”

Golden Heart Foundation started a community kitchen in 2017, in the heart of Budhwar peth — Pune’s red-light district. To make things even more meaningful for the residents of the area, they started employing people from the community in the kitchen. “It became truly a community led movement and we did not want to dilute it by getting anyone from outside. Work at the kitchen begins at 6 am every morning and we are required to wrap up by 6 pm. Lunch is served at the kitchen and on most days, we have people packing up food for dinner as well. On an average the kitchen serves around 400 people every day,” says Shehnaz.

Besides the food, the biggest pull for the community members to visit the kitchen was the availability of space. Explaining this, Rohini McArthur, the Vice President of the organisation says, “Most of them live in tiny units, in some cases it’s just one room which is also dingy and dark. For them to be able to just come and sit in a nice open area, chat with us and be served food was a big thing.”

Shehnaz dials back to the time when the organisation was nascent. With the seven members coming together, she says that they were able to collect close to Rs 2 lakh every month at the beginning. “Each of us was doing well in our careers and could afford to set aside this money. This was a great push for us and that is what prompted us to take the community kitchen on rent and plunge into working there,” she says.

Once the basic framework was up and running, the group started relying on external help from friends and other family members as well. Today, they receive help from far and wide. “The world is full of good Samaritans, who if they believe and trust your work, will always lend a helping hand,” she says.

Shehnaz says, “As and when a requirement would crop up we would put out a message with the details of what is needed. On almost all occasions so far, we have managed to find what we need. We encourage people to not just donate but visit the center and see where their aid is being used for as well.”

Rohini also speaks about how they have seen help pouring in from all quarters. “There is a vegetable vendor in the area who diligently comes by every evening after he is done for the day and sells the vegetables he has left at half cost to us. He says it is his way of making a difference.” While this is one example, Rohini says that there are so many more who work in their own silent ways. “The local grocer, during Diwali, wanted to bring a smile to the people and added a small gift to each ration kit.”

In 2020, amidst the raging pandemic, a second community kitchen and a skill development centre was started in NIBM, Pune. There are some people who travel for almost 20 km and even go through the trouble of changing two buses just to be able to have a meal and take some food back home. “Only after the community kitchen started functioning did I realise what a huge gap it was filling,” she says.

“Besides just giving them a good meal we also wanted to equip them with skills. We had people coming forward, offering help to teach tailoring, salon work, basket weaving, make up, mehendi application and even spoken English,” adds Shehnaz. With many women losing their jobs during the pandemic, this provided them with a great source of income.

There are close to 250 women who have been trained in a skill set from this centre.
Shehnaz adds, “Veritas Technologies, a company in Pune, also donated laptops and desktops so we can eventually start a computer centre as well.”

While some women are able to earn up to Rs 25,000 a month many others average between Rs 10,000 to Rs 15,000. “We market the products they make and ensure that whatever money is made is given to them,” she says.

For Alisha, the organisation was a god-send. She says, “I learnt tailoring at the skill center and almost immediately got a job at a tailoring unit. With having to spend no money on acquiring this skill it feels good to be able to earn my own money and contribute towards the household expenses. Besides this, I also got to attend college and complete my course on design.”

“With each of them seeing how learning a skill can translate into earning, the demand to enroll at the skill center has also increased,” adds Shehnaz. She speaks about another beneficiary of the centre, Archana Sadanwad. She says, “Archana was widowed when her husband, who was a cook, committed suicide during the first lockdown in June 2020. He left behind Archana, three children and no money or security for them. Up until then Archana was always at home and never stepped out to work. So, from zero income she learnt how to cook and now earns Rs 15,000 each month by cooking for close to 300 people every day at the community kitchen.”

These are just a few examples of how the organisation’s work has impacted lives. If you wish to be a part of this change or contribute your time and efforts in any manner, you can reach out to the organisation here and via their Facebook page here.