In 34 Years, A Teacher Has Planted 50000 Trees To Turn Barren Land Into Green Oasis 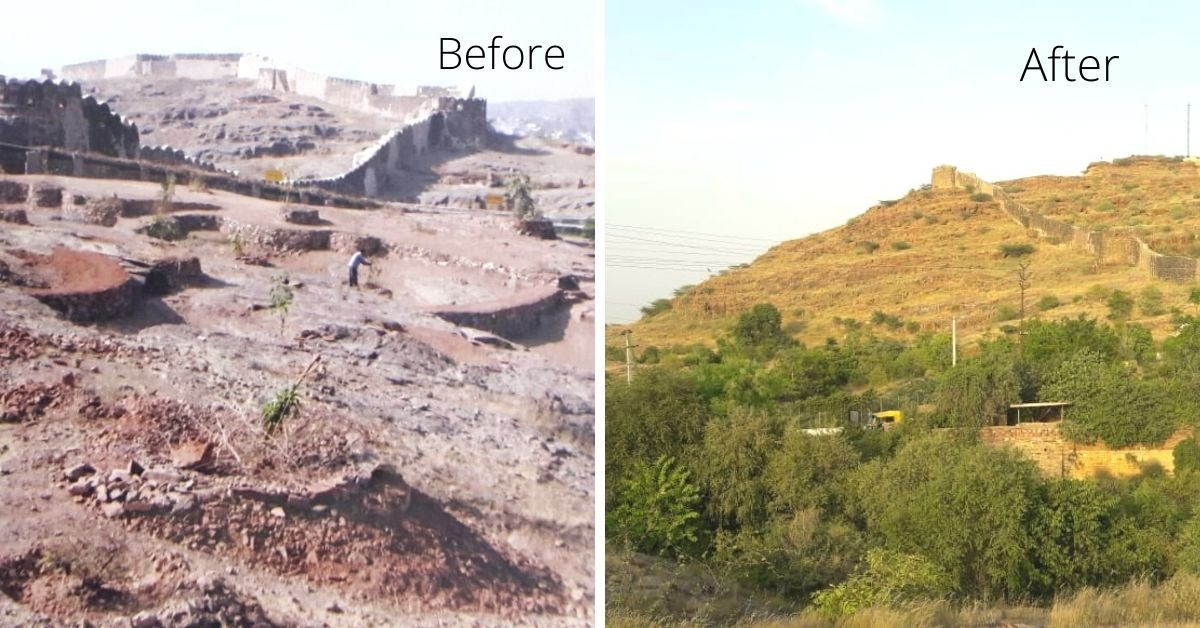 Prasannapuri Goswami from Rajasthan has planted thousands of trees on the barren land surrounding Mehrangarh Fort, all because of a childhood dream he nurtured over three decades

Often referred to as the Gateway to Thar, Rajasthan’s Jodhpur sits proudly at the edge of the famous desert, and is popular for its temples, palaces and forts, including the Mehrangarh Fort. But there’s something peculiar about the surroundings of this heritage site in particular.

The fort is surrounded by green cover at its foot and is home to thousands of trees as well as hundreds of species of birds and local wildlife.

In 1987 Prasannapuri Goswami, a native of the area, decided to change the landscape of this fort and its surrounding areas. His dream spanned over 34 years, and the 22-hectare area, which once lay barren, is now surrounded by 50,000 trees.

Prassanapuri, now 74, says that he spent his childhood wondering why the area around the fort was always barren and dry. “I lived in the nearby Khejri chowk and passed the fort on my way to school. I always wondered if greenery could add to the architectural marvel amid the lifeless land,” he tells The Better India.

In 1987, Prassanapuri began teaching at a girls’ school. The school was less than a kilometre away from the fort, and Prasannapuri religiously visited the foothills, known as Sant Chidiyanath, after school hours to plant saplings between the Jaswant-Thada and Mehrangarh stretch.

“It was difficult, as the saplings found it hard to survive in a region with such less rainfall. They needed strategic placement for their survival,” the former teacher explains. Prassanapuri says that since he had witnessed the fort area weathering all conditions through his growing years, he knew how the water flowed during monsoons, and which patches were thus ideal.

So he began planting trees in areas where rainwater seeped in. Slowly, he spread the plantation to other patches. “I started with thorny plants and bushes that require less water. There was no water supply in the hills. It had to be procured from nearby public places. Sometimes, I filled and carried bottles from a pond located far away during peak summer months, just to make sure the plants would survive,” he says.

Meanwhile, locals in the area doubted his intentions and even laughed at him sometimes. On one occasion, a few people uprooted 200 plants overnight. “They used to taunt me, questioning how I could water the plants when the residents struggled to find drinking water for themselves,” he says. However, Prasannapuri was determined to make his dream come true.

His work soon caught the notice of the royal family. “Maharaja Gaj Singh learned about my efforts and allotted two staff members to assist me,” he says.

Prasannapuri adds that eventually, the district administration also took cognisance of his work. In 1995, the administration facilitated the setting up of fences around 22 hectares of land so the chances of survival of the plants would increase.With enough protection and under Prasannapur’s care, hundreds of trees started growing in the area.

Inspired by his success, many locals as well as school students started volunteering for the initiative. “The students helped under the National Service Scheme (NSS) and other academic events that took place through the year,” he says, adding that he formed Mehrangarh Pahadi Paryavaran Vikas Samiti, a volunteer body working to make the area greener.

Prasannapuri says that over the years, various entities such as the district administration, forest department, traders body, education department, and the Mehrangarh Museum Trust have helped with monetary aid worth Rs 32 lakh. In 1999, he received help from the forest department to create a herbal park and increase the green cover.

However, in 2005, Prassanapuri paid a heavy price for his green cause through the loss of his son, Pramodpuri. “I was away posted in Jalore district for work and asked my son to tend the plants during my absence. One day, the wind blew where he was standing while spraying pesticides on the plants. He fell unconscious within minutes and lost his life after two days in the hospital,” he says.

However, Prasannapuri says that the loss of his son made him care more for the environment and his plants even more. “Some plants are as old as my 28-year-old son, and I consider the trees my children now,” he says.

Opportunity to connect with nature

“There are over 50,000 trees on the 15-acre patch, and the remaining 7 acres have been designated to create a herbal park,” Prasannapuri says.

He adds that success has brought multiple benefits at different levels. “Firstly, the barren and dry land has turned into a green zone. The area around the plantation is cooler and pleasant. Hundreds of people visit the area during the day for walks and working out,” he says.

Prasannapuri says that the move has also helped prevent illegal encroachments in the area. “If not the plantation, I was afraid of losing the hill to increasing encroachments, thus threatening the beauty and integrity of the fort,” he says.

The mini forest has also brought respite to the wildlife, with species such as porcupines, Indian hedgehog, snakes, owls, rabbits and monitor lizards now thriving in the area. “The green patch is now home to 195 species of birds, 130 varieties of medicinal herbs and hundreds of fruit-bearing trees,” he says, adding that the entire ecosystem has contributed towards improving the quality of the soil.

His work has inspired others to improve the green cover in the city. Mahesh Vyas is one such person, who was inspired by Prasannapuri’s work and created a green patch in his neighbourhood. “I have known about Prasannapuri since my college days and visited the hill in 2009 to volunteer with him. I tried to create a green zone with hundreds of plants myself. However, it failed due to the overflowing of a nearby pond,” he says.

Mahesh adds that a patch in his residence near Lalsagar Pond became a dumping ground and a breeding place for mosquitoes. “The cases of chikungunya increased, and we decided to clean the water body and try again. With Prasannapuri’s guidance, we created a green zone with 600 plants under the Brij Bawari Yuva Seva Samiti, a volunteer group contributing to the cause,” says the 38-year-old.

Meanwhile, despite all his achievements thus far, Prasannapuri continues to work as hard as he did when he began. “I retired in 2008 and have since invested more time towards the cause. I spend about six hours a day looking after the plants and protecting them,” he says.

On a concluding note, he says, “I am glad to have contributed successfully in creating green lungs for the city. The locals visit the area for fresh air and can reconnect with the environment. They have an emotional attachment to the saplings they have planted or watered. They care more for the trees now than they did before.”