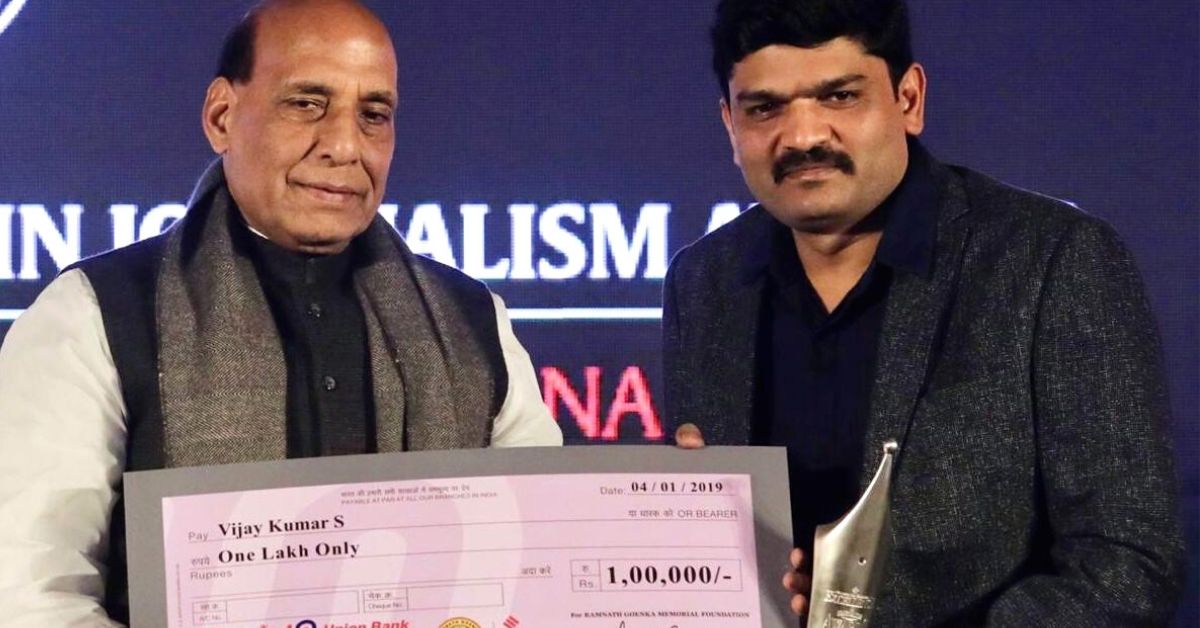 S Vijay Kumar, the journalist who unearthed the Gutkha Scam in Tamil Nadu was also the recipient of the Ramnath Goenka award for investigative reporting in the print category in 2017.

As a journalist, I have always told myself that the pen is mightier than the sword. A few words strung together in a well-told story can help bring about true change, and sometimes, a revolution even.

For an investigative journalist, it is all about finding those words, unearthing those stories at literally any cost.

S. Vijay Kumar, a journalist with over two decades of experience, is the epitome of why diligent investigative journalism is immensely valuable. In a free-wheeling conversation with The Better India, this award-winning journalist allows us a peek into his professional life.

Awarded the Ramnath Goenka Award for investigative reporting in the print category in the year 2017, Vijay played a pivotal role in unearthing a scam worth Rs 39.91 crore, which we now know as ‘the Gutkha Scam’. Since the case is now under investigation by the CBI (Central Bureau of Investigation), we will not delve into details, instead we will explore the man behind the story that made headlines.

Life as a journalist

Born and brought up in Andhra Pradesh, Vijay studied at the GITAM Engineering College in Vizag, where he pursued an engineering degree and then went on to do Postgraduation in Journalism at the Madurai Kamraj University. At the young age of 22, he joined The Indian Express in Madurai. Three years later he found himself in Delhi with the Press Trust of India (PTI).

“In 2001, I joined The Hindu and have been here ever since,” he says. After 20 years as a journalist, he is now the Senior Deputy Editor, Internal Security, with The Hindu, in Chennai.

Vijay says, “As a cub reporter, by default one is assigned the crime beat and it was no different for me. I spent a considerable amount of time on the field, spending late nights working and reporting from the ground. It requires a lot of time commitment.” The assignments slowly grew on till he started enjoying the work of a crime/investigative reporter.

“I decided to continue working the beat given that I had worked on creating a good network, and starting from scratch was something I didn’t particularly want,” he says.

Not that it was a cushy post. Even as young reporters, investigative journalists are trouble magnets – trouble attracts them, and of course, they attract trouble. “There have been instances when there have been threats issued to my life. However, I have always considered this to be a part of the job I do, and have never deterred from it,” he says, with a sense of unreal calm.

Gutkha scam – how, when, what

Of all the stories he has broken, the Gutkha Scam story was the one that turned him into a household name. The scam relates to payment of huge bribes to politicians and government officials for facilitating the manufacture and sale of chewing tobacco illegally — as the Government had earlier banned the product. Vijay started working on the Gutkha scam sometime in May 2017 and says that so far he has covered it in more than 15 stories. The CBI is yet to file a second charge sheet in this ongoing case.

“It was sometime in April 2017, I was having dinner with one of my bureaucrat contacts and a casual remark that was made during dinner that evening stayed with me. He mentioned how the state government was sitting on a confidential report from the Income Tax Department pointing to bribes to the tune of Rs 40 crores, allegedly received by the State Health Minister and others—including three or four senior IPS officers—from a Gutkha manufacturer,” says Vijay.

While he did not react immediately, it was a tip-off that he knew he would pursue meticulously. Days of strenuous efforts to put bits and pieces of information together ensured that the scam saw the light of day. Speaking about how it all happened, he says, “I tried tapping my sources at different levels but only made vague enquiries so that I don’t send out an alert by knocking on the wrong door. Even the Central/State intelligence agencies were not aware that such an offence had taken place.”

He adds, “The Gutkha scam story is perhaps the most challenging one I have done in my career.”

“Sources are like shadows. We cannot exist without them,” he says. Each crime reporter uses their own method to cultivate these sources and it is important to have them by your side. A source can be just about anyone who has some information that is worth pursuing. “Your source could be a constable in some station or even the DGP. As a journalist, one does not cultivate the sources, they just happen and grow with time,” says Vijay. There have been instances when Vijay only got a message or an email with information, without even knowing who it was coming from.

“For all I know the person sending in the information could well be my neighbour. The sources mostly remain unsung heroes and are an integral part of a journalist’s life,” says Vijay. He also mentions that he never tries to find out who the source is or where the information is being sent from. “Over the years one’s instinct also starts to work and it becomes easier to discern the truth from the lies,” adds the 45-year-old.

A majority of the sources who come forward with a tip-off or a story do not have a personal agenda.

While you may get many tips and stories, an investigative journalist needs to deal with the reality that there are constraints and hurdles to navigate through, from the tip-off to the printing press. There are times when a story you pitch is not approved or doesn’t seem like one that the publication can risk printing. Vijay says, “If you believe in your story, which you should, then go ahead and fight for it.”

“There have been times when all I had to back me up was my conviction in what my source has told me. No paper to show as evidence, no one willing to come on record and back the claims I make, and yet I have gone ahead and defended the story,” he says.

While being passionate about the craft, one needs to remember that with every story, a journalist’s credibility is at stake. One wrong move can destroy their career, no need for a suspension or a warning. “A journalist who loses credibility is done,” he reiterates.

Speaking about the several instances when his stories have made a difference, he says, “There were several instances when investigation into certain issues led to a human-interest angle. The story of a woman constable who was found to be a transgender during a routine medical check-up in TN police training college for instance is one. She was dismissed from service for claiming to be a woman and joining the force. It was a front-page story in The Hindu, exposing how the police constable, the sole breadwinner of the family, was left jobless. The story ensured that the court intervened and helped her get her job back.”

A story about a class 12 topper, who also happened to be a parotta master in a roadside eatery in Madurai, led to the government offering him a seat in Loyola College, Chennai, and also sponsored his entire education. He is now an IAS officer serving as District Collector. “There were many occasions like these that gave so much professional satisfaction,” he says.

Speaking about how he feels when his articles get published and people send in messages of appreciation, he says, “Well there is always this feel good factor when someone appreciates your work. Some genuinely wish you well while a few others try to know the source. There is always this risk of being monitored legally or otherwise. Once a story is published, you move to work on another.”

In conclusion, he quotes Ben Bradlee, former Editor of the Washington Post — “The truth, no matter how bad, is never as dangerous as a lie in the long run.”