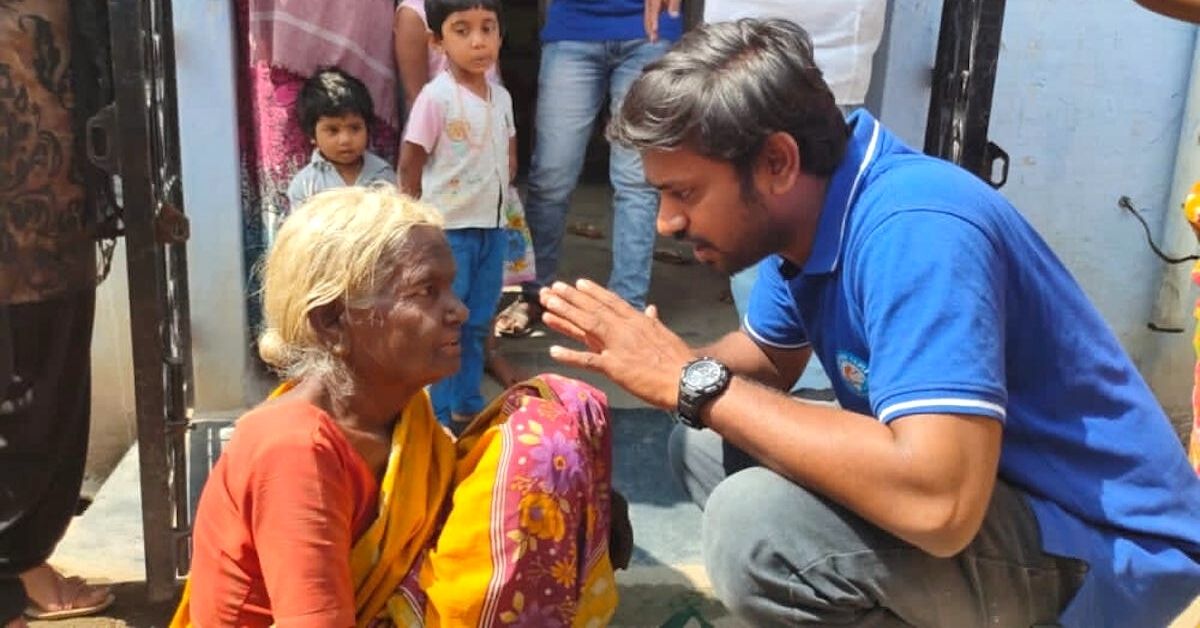 P Naveen Kumar through Atchayam Trust in Tamil Nadu, has 400 volunteers across 18 districts helping beggars to rehabilitate and give them a second chance in life

All of us have encountered beggars in public places, asking for money. Many times the request comes with an added story about getting lost or robbed or abandoned by the family members.

Those with a soft heart often tend to give some loose change, buy them some snacks or hand over a water bottle out of sympathy. But regular visitors or locals, well aware of the modus operandi, rarely fall for such ‘tall tales’.

P Naveen Kumar had the same experience six years ago. But instead of paying a few rupees and dismissing them, he has since then rehabilitated more than 5,000 beggars and given jobs to almost 600 of them.

“It was in 2014 that I visited a temple in Erode. An elderly lady asked for some money claiming to have been abandoned by her relatives. She needed the funds to get back home,” Naveen said, a student pursuing his third year of Mechanical Engineering then.

Naveen handed over Rs 15 to the lady, which was meant to get spent on his dinner. “I had water to fill my stomach and slept, thinking of the lady,” he added.

A couple of days later, he found another man who introduced himself as Rajsekar and asked for some money to travel. Naveen again handed over the money and slept on an empty stomach.

Coming from an economically weak background and having a specially-abled father and bedridden mother at home, Naveen decided to help with all that he had at disposal from now one.

However, a few days later, he was shocked to see Rajsekar at the same spot asking for money from others.

“I realised that he was begging. I approached him demanding to know about his situation and why he would not earn with dignity, instead of begging on the streets,” Naveen said.

For 22 days, the engineering student followed Rajsekar every evening seeking answers, but only to be abused, shooed away and insulted. “One evening, at 11 pm, we shared tea. He opened up, saying that he was alcoholic and disappointed with his life and hence decided to follow this path,” he added.

The youngster also discovered Rajsekar hailed from a well-to-do family.

This opened Naveen’s mind to more possibilities. So he immediately decided to help beggars by giving them a job or rehabilitating them in some manner.

“I approached my friends and teachers at the college, but they discouraged me. They advised me to concentrate on studies and build a career,” Naveen told The Better India.

They said, “The Indian government has not been able to solve the issue of beggars, how will you do it alone?”

The student followed the advice for the next one year to get awarded as the best outgoing student of 2014.

“Rajsekar never went out of my mind, and I immediately found a job for him as a watchman in a residential society,” he added.

From one beggar to thousands 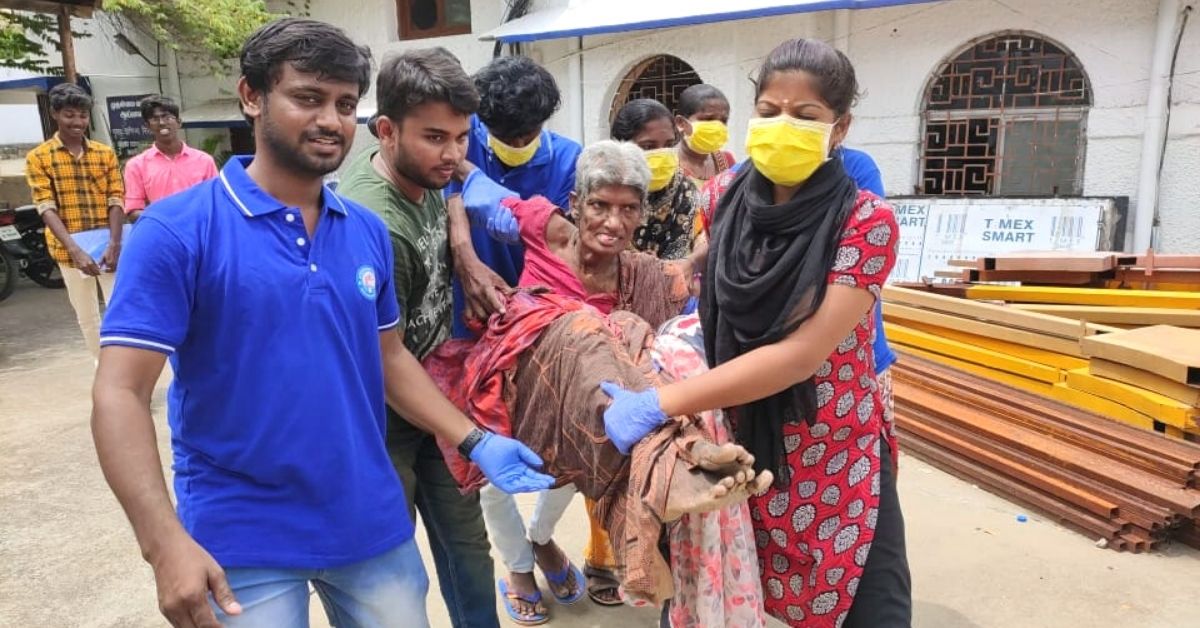 After that success, he decided to form the Atchayam Trust for beggar free India. Naveen continued his higher studies in Thermal Engineering until 2016 as well.

He hit the most obvious problem immediately – funds.

“I could not ask for money at home and started seeking donations and funds from my friends and college students. But they discouraged me saying that I am also begging for money like the beggars,” Naveen said.

Things changed after Naveen graduated, and took a job as a lecturer in the same college. Since 2016, with his salary, small donations, and a team of 400 volunteers across 18 districts, Naveen has re-established 572 beggars and rehabilitated over 5,000.

Naveen said that it requires about Rs 4,000 to provide basics and medication to a beggar initially. “We only get individual donations in small amounts of Rs 500 and Rs 1,000. We do not get bulk donations. On many occasions, the volunteers spend from their pockets. We have also started crowdfunding on Milaap,” he added.

The beggars are found through weekly drives at the bus stands, railway stations, temples and other probable public places. The beggars are approached, their history and individual issues noted down.

Sometimes police officials call and inform about beggars who need help. Besides, people have also started calling and informing the volunteers. On average, the trust receives 10 calls per day.

“I classified them into 19 categories depending on whether they were abandoned, or destitute, drug users, specially-abled, orphans and so on. People who could get set up with some skills were helped with street food stalls, tailoring, watchmen or painters or servers at the restaurants,” Naveen said. The others got counselled and sent to nursing homes or reunited with the families.

The counselling is done by student volunteers, some of whom are psychology students and medical students. The counsellors mainly work on convincing the beggars to return to their family, get a job and be self-independent. Several nursing homes and NGOs have been identified, who can find a solution for them.

The rehabilitation involves helping beggars follow cleanliness routines, providing them with food and clothes, and treating drug users through doctors.

Vetrivel, a sub-inspector with Veppadai police station said he knows Naveen’s cause for a while now. “On a few occasions, I informed beggars needing help for food or clothes. It is a good job that people usually ignore,” he said.

A new lease of life 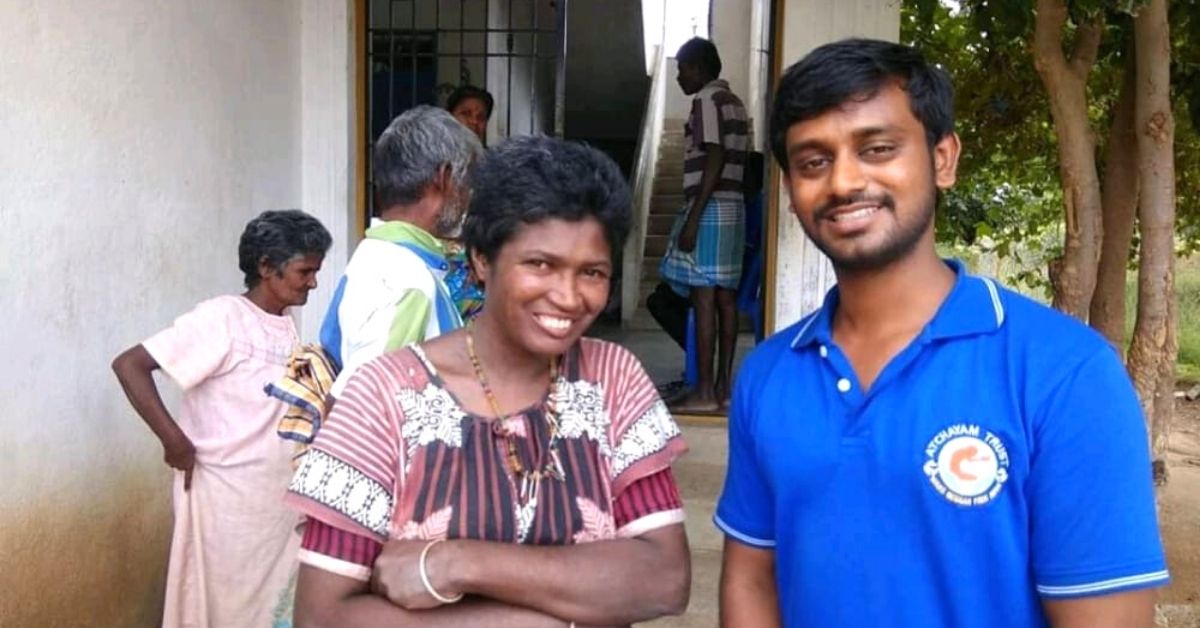 The youngster’s work also got recognition at the national level in 2018 when he was awarded the National Youth Award from the government of India. It got followed by a state youth award in 2019.

The Atchayam Trust has recently set up a rehabilitation centre which houses 25 people temporarily for their health check-ups, yoga, meditation, and treatment until they get help to set up a livelihood or sent to a nursing home.

K Venkatraman is one such person – who was addicted to alcohol, lost his job and his family over the past ten years.

“Naveen helped me by giving food, shelter and a fresh set of clothes during the COVID-19 lockdown. After knowing about my history of losing my family and my addiction, a rehabilitation session was done,” Venkatraman said.

Venkatraman slowly improved his physical and mental health to start earning Rs 300 a day at a pushcart vehicle, selling tea. “Now I am staying with my family and working as a painter and earning Rs 800 a day,” he added.

The 40-year-old painter says Naveen has returned to his family after a decade and a new life.

You can know more and contribute to Naveen’s cause here.