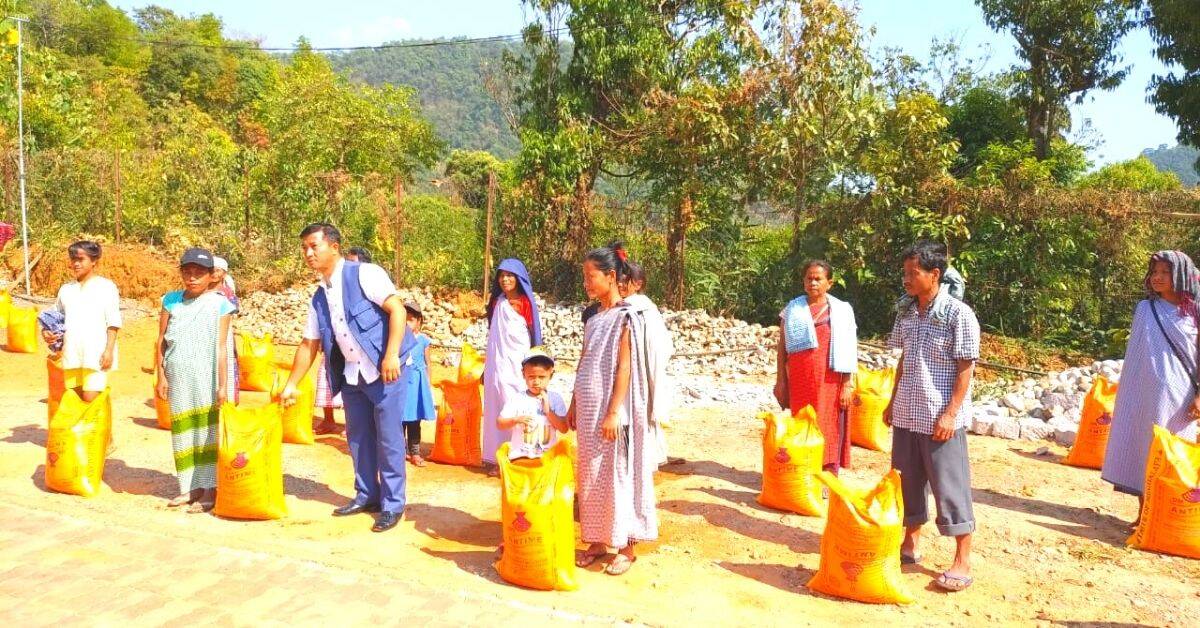 “Many of these families did not have a single grain of rice and no source of livelihood. As soon as we would go to one underserved village and document our work, the authorities would follow suit.”

When the country went into a nationwide lockdown in March, 90-year-old Meirad Ristina Marwein from Sohra-Rim village (about 40 km from Shillong) in East Khasi Hill District, Meghalaya, had no money or food grains.

For this elderly lady living in dire poverty, who was not registered with the public distribution system (PDS) and didn’t have a ration card, it was now a question of survival.

On 1 April, however, a group of volunteers came to her village and delivered a 50 kg bag of rice. Responding to this act of kindness, she told the volunteers, “God be with you… Feel bad for us too, for we are poor people”.

Similarly, Syrki Mynrieng, a teenager, farmer and an orphan from Kongthong village in East Khasi Hills district, who grows and sells broomsticks for a living, was left with no source of income because of the lockdown. Depending on him for survival were three younger siblings, including a four-year-old sister. Unable to sell his produce and unregistered with the State PDS system, he didn’t have a single grain of rice at home.

Instead of letting Syrki and his young family suffer in hunger, help came in the form of ‘Rural 7Trep Aid’, a charity organisation established by a group of concerned citizens from Shillong, established a fortnight after the nationwide lockdown was announced. Led by local entrepreneur Alan West Kharkongor, who runs a small resort, this organisation brings together citizens from different walks of life who have been closely involved with rural tourism in some capacity long before COVID-19 struck the state.

“With contacts across remote villages, we were always in touch with individuals like the village headman, guides, boatmen and porters, etc. When the lockdown started, they started calling us about how some of their villages were not getting any food. That’s when one of our friends, Dasumarlin Majaw, a local entrepreneur who also runs a resort, suggested why not we do something to assist them because these are people we know. There were a lot of people and organisations in Shillong helping the urban poor. Still, no one was reaching out to people living in rural areas that were hit pretty bad,” says Aiban S Mawkhroh, an architect and member of this organisation, speaking to The Better India.

That’s when they got together, set up a WhatsApp group and within a week began organising the help required. All this happened within a fortnight after the lockdown was announced nationwide.

Since they came together, this set of Shillong residents from different walks of life have raised more than Rs 11 lakh (Rs 8.2+ lakh from online crowdfunding platform Milaap and Rs 3.5 lakh from offline source) and distributed foodgrain and cash to more than 2,000 poor, vulnerable and marginalised households across 200-odd villages.

Beyond their yeoman service to these marginalised communities, the real impact of their work was directing the State government’s attention to them.

“We were there at a time when these people really needed us. Many of these families did not have a single grain of rice and no source of livelihood. Even the State government apparatus couldn’t reach these remote parts, including local elected representatives and officials. Taking a broader view, we were path-finders for the government because of our contacts in rural tourism. As soon as we would go to one underserved village and document our work online, the authorities would follow suit,” says Alan West Kharkongor.

Who to help and how to help them?

The organisation set some parameters on who they would assist during this initiative:

1. The marginalised landless and daily wagers that are not listed in the PDS system.

2. Remote villages where the PDS system was inaccessible at that moment of time.

3. Families run by single mothers, orphans and those stakeholders relying on the tourism industry like boatmen, guides and vendors, etc.

“While doing our due diligence, we heard that the government was distributing rations to people with ration cards. To our surprise, we found many living in these rural parts who didn’t have ration cards and weren’t documented. So, we would call up the headman of the village and specifically tell him that we want information about people who don’t have ration cards. Our objective was not to feed entire villages, but those without ration cards living below the poverty line,” recalls Aiban, talking about the early phase of this initiative.

The exercise began with a Marwari businessman, who had donated a truckload of rice of 1,000 rice bags, and the team got down to distributing them in villages on the outskirts of Shillong.

After documenting the entire exercise, a team member, William Diengdoh, got in touch with crowdfunding platform Milaap to raise more funds and ensure greater transparency.

“We posted those photos on Milaap and within 24 hours received nearly Rs 2 lakhs in donations. Our objective in going through Milaap was to be as transparent as possible. When donations began plateauing in June, another member of our team, Keith Wallang, the manager of the famous blues band Soulmate, organised a couple of musicians to play live music on weekends to raise funds. As outdoor people passionate about rural tourism, the biggest perk of participating in this initiative was the opportunity to visit these remote villages during lockdown when all our friends were cooped up inside their homes. Our contact in the Deputy Commissioner’s office helped us procure all the necessary documentation and passes so that we could visit these villages,” says Aiban.

Assistance also came from Adventurous Hynniewtrep Off Roaders (AHOR)—a group of off-roaders—who assisted them with their all terrain vehicles to help them transport foodgrains to villages where even the local block development officer (BDO) from the government couldn’t reach. This was a real collaborative effort.

“In the first run itself, we targeted remote villages since it was difficult for them to come to Shillong and buy rice. We first assisted the villages around Khadar Shnong (famous for Kongthong, the whistling village), Tyrna (the entrance to the famous double-decker living root bridge) and Sohra-Rim. In the villages around Khadar Shnong, for example, most local farmers were growing broom grass. These were the areas we targeted during the first phase and covered around 12 villages. Farmers, there are heavy into the cultivation of broom grass, a cash crop. But with the lockdown and no way of selling them, they had no grain even to eat unlike those villages where people were into rice cultivation,” says Alan.

After the first phase of three to four runs, the team reached out to villages near Dawki town in the southern foothills of West Jaintia. Scroll through their Facebook page, and you can see regular updates about their runs with details about the location and families affected.

“In the first three to four runs, we bought rice from government-authorized godowns at Rs 30 per kg like all ration shop owners. So, we stood in a queue with all of them, following which these rice bags were packed into our cars or trucks for distribution the next day. However, this was an arduous process because, at the same time, the government was distributing rations as well. We had to battle through the standard bureaucratic maze like seeking permission from the Deputy Commissioner, going to the government godown and waiting till 2 am for the rice to be loaded into our cars, following all the SOPs and distributing it,” notes Aiban.

After the first three-four runs, the organisation largely shifted to distributing cash to these vulnerable families in denominations of Rs 500, Rs 1,000 and Rs 2,000 per head since by then the government PDS system had become more streamlined.

“With due respect to them, we never realised how much Rs 500 is valued. However, starting from Rs 500, we increased it to Rs 1,000, and for vendors, guides and boatmen, the figure increased to Rs 2,000. We had also initially offered our assistance to the State government. Our offer was that we could be their distributors of rations and other necessities since we have contacts on the ground and the necessary wherewithal. Although the government was appreciative of our offer, they didn’t need our assistance. A month after we started moving into these villages, the Ramakrishna Mission, a socio-religious organisation, also came with their trucks and began distributing rations and other essentials,” says Alan.

“We did one run per village. After every run, we put up all the details on our Facebook page. I guess that the government would see where we went and then they would send their people. There was a very remote village I went to in East Jaintia Hills on the Meghalaya-Assam border. When we got there, the villagers treated us like VIPs. They told us how the BDO promised to come to their village and distribute rice. However, it had been two weeks since that promise was made. After we put up this particular run on Facebook, the government followed up on the ground. We made it a point not to repeat villages because there were others we had to help,” observes Aiban.

This is the crux of the impact this organisation has made. In situations like the current pandemic, working citizens with families can help these vulnerable communities consistently over significant stretches of time. However, in these parts, only the government has the resources and wherewithal to offer long term support. By directing the government to these communities, the situation on the ground has improved significantly.

“The situation in these villages are much better. There was a time when some families reverted to eating maize or even sourcing wild fruits from the forest. Things are much more organised now. The government has got its act together. In our last two runs, when we realized that the government organised the food rations, we shifted to offering cash assistance to stakeholders of rural tourism like guides, boatmen, etc.” says Alan.

“We are at the last stage of our initiative with about Rs 90,000 remaining, which we have promised to guides, boatmen, and other such stakeholders from three villages. To be very honest, we are a group of people with our own jobs and lives. Doing this work has taken its toll, and donations have plateaued once again. After we distribute the remaining money, we may shut shop,” says Alan.

Having said all that, none of this would have been possible without the people who donated their money to this initiative. One of Alan’s friends from the United States alone had donated about Rs 2 lakhs.

“We were also fortunate to have Trevor Lyngwa, a former executive with a telecom company, who made sure all our financial transactions are up to date and transparent. More importantly, we want to thank all the people who came forward to donate money. There were even school children who donated amounts as little as Rs 200. At the end of the day, we were just the facilitators,” notes Aiban from his home in Shillong.

But without these concerned residents of Shillong, none of this would have been possible.

(You can check their Facebook and Milaap page here and here.)