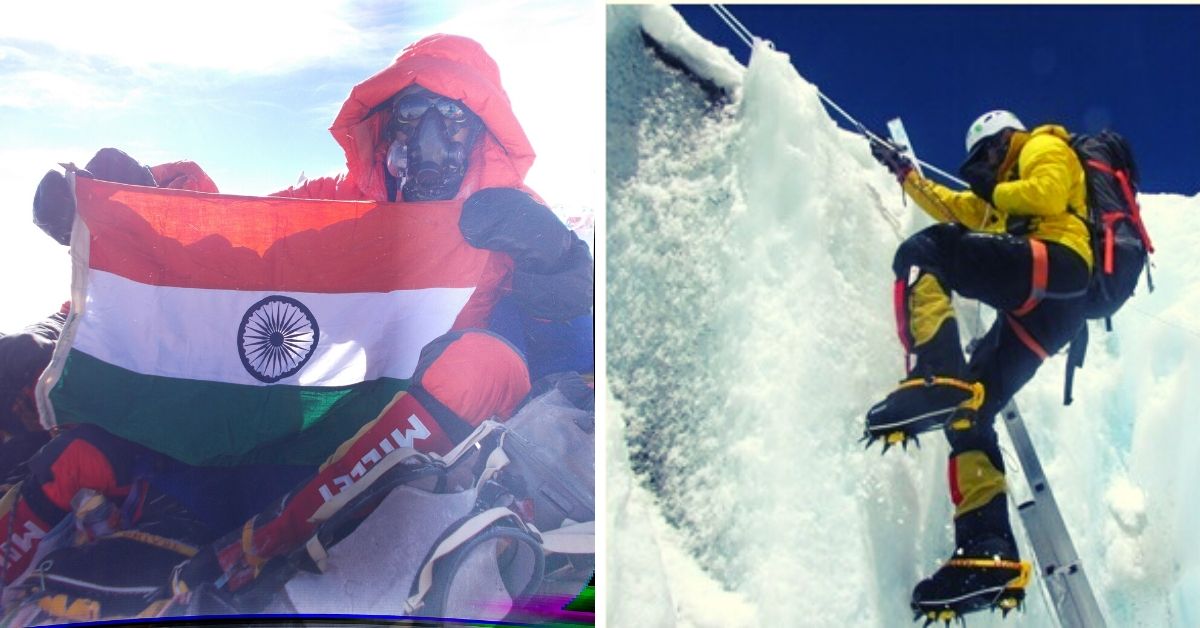 In the crushingly frozen temperatures on Mount Everest, even small tasks such as wearing socks or lifting a bag can be tiring. So how did, IPS Suhail Sharma walk for nearly an hour with very low oxygen?

It’s around 5.30 a.m. Dehydrated and exhausted, IPS Suhail Sharma woke up to take in his view — literally, the top of the world.

He yearned for water but his bottle was frozen. His muscles were shutting down as he tried to steady himself.

But Sharma tried not to pay attention to his body’s calls for help, for he had made it to the world’s highest peak amid an uncertain fate.

Curved gorgeously from all sides, where the sky and the earth became one, and the clouds sailed beneath his legs in freezing temperatures, this breathtaking view is worth all the hardships and mental pressures, he thought.

A few minutes later, IFS Prabhakaran, who was Sharma’s ‘Everest buddy’, joined him. Sharma smiled at Prabhakaran and thanked him for his kind gesture a few hours ago.

“Halfway between Camp 3 and Everest, my oxygen reduced to one as against the requirement of 3-4. Staying still in one place also demanded oxygen and fortunately, I decided to go a little further. I knew things could go catastrophically wrong; one misstep could have set me on a treacherous path. I went ahead despite the low oxygen and spotted Prabhakaran in the tent. It was such a relief. We shared the cylinder for nearly two hours,” Sharma shares, in a conversation with The Better India (TBI).

Meanwhile, Prabhakaran was confident that sherpas would bring new oxygen cylinders at some point.

Speaking to TBI, he says, “My cylinder had 1-2 litres per minute of pressure which was temporarily sufficient for both of us. I have been friends with Sharma since 2015 and we have been together on several such expeditions. We have faced turbulent and good times in each other’s company. So, sharing the cylinder was the obvious solution.”

Luckily, the sherpas arrived just in time before the duo left the tent with fresh cylinders.

How The Nepal Earthquake Inspired Sharma to Climb Everest

Sharma, an IPS officer of the 2012 batch, is presently Superintendent of Police in the Sangli district. He is fond of adventurous activities, including trekking and hiking. In fact, this passion of overcoming challenges and scaling new heights pushed him to quit his corporate job to serve the country.

In 2013, during his first posting in Chandrapur, Maharashtra, Amritsar-born Sharma started prepping for mountaineering stints.

The 35-year-old underwent courses from the Himalayan Mountaineering Institute (HMI), took gruelling hours of training and exercise, and completed several smaller expeditions before setting his eyes on Mount Everest.

“I was posted in remote areas where the gym is an alien concept. I patrolled at night by running from one police station to another so that I could build my stamina and core. After climbing a 6,200-metre mountain in Ladakh, I had found my passion,” he says.

In 2015, Sharma was selected for the Jubilee Mt Everest expedition by the Government of India.

After training at HMI under harsh weather for months, Sharma was ready to satiate his hunger to triumph fears, risks, and challenges. Along with his team, he trekked in Kathmandu and other places for a month as a warm up to Everest.

However, one night, an unprecedented tragedy struck, an earthquake that devastated the country of Nepal.

“It was the worst tragedy. Avalanches had taken the lives of 18 mountaineers and we remained out of contact for nearly four days at 17,500 feet. I was buried under the snow for a while, before I gained consciousness. We went through hundreds of aftershocks. Four days later, we were airlifted,” recalls Sharma.

The earthquake deeply impacted Sharma who witnessed crushing sounds in the mountains every five minutes. He travelled to Kathmandu in a helicopter along with several dead bodies.

“I was fortunate to have survived something so dangerous. I had sleepless nights but I was not deterred by the incident. In fact, my resolution to climb Everest became stronger.”

Sharma’s passion was a tribute to his father who always wanted his son to achieve the impossible.

This time, he chose the steep route (China side) despite knowing that very few rescues are carried out from there.

“The China has steeper slopes and has high-speed dry winds. The winds suck the moisture from the body, leaving one more exhausted. In the crushingly cold temperatures, even small tasks such as wearing your socks or lifting a bag can be tiring. Crossing windswept snowfields in oxygen-starved altitudes in unforgiving conditions is very dangerous. It takes weeks to get acclimatised,” says Sharma.

For nearly a month, Sharma had severe headaches and sleepless nights. Amidst this, the braveheart managed to cross intermediate and advanced camps to finally reach his destination.

Day 6: At 25000 ft,as the air goes thin, the rope in the hand is the only anchor to life.Mountaineering its just not about climb, its also is a test of grit.@MountEverest pic.twitter.com/IS4kST48FX

After his moment of celebration, Sharma climbed down with the same zeal. It was only when he reached the Advanced based camp at 21,300 ft, could he feel his hands and legs. After hours of physical and mental exhaustion, he finally felt safe.

“It was a very proud moment. I broke down when I realised I had achieved mine and my father’s dream. I had given my heart and soul to this expedition. It was a roller-coaster ride where I lost friends and gained priceless memories. My trip was visibly a life-changing one, as I weighed 81 kilos before starting and was 68 kilos by the end.”

Being buried in snow and running out of oxygen are probably two of the most traumatic experiences. And coming out of both like a warrior is all the more praiseworthy.

So, how did Sharma achieve this incredible feat?

“The mind is the devil and the guru here. I had to train my mind for the worst scenarios. Fighting to strike a balance in low air pressure has taught me to never give up. The journey of life will not be measured with claps or the pats on the back. It will be measured with the bruises on the body and tears in the eyes.”

This warrior spirit is reflected in his professional life, as Sharma investigated the Govind Pansare murder in Kolhapur. Maintaining law and order in Naxal-affected Chandrapur is another noteworthy mention.

While there are no expeditions for the IPS officer, for now, he mentors and guides mountaineers who aspire to climb Everest. He even trained a team of ten tribal kids from Maharashtra, five of whom achieved the feat.

It is very rare to come across IPS officers like Sharma who manage to achieve professional as well as personal aspirations, thanks to their unshakable faith and awe-inspiring will.