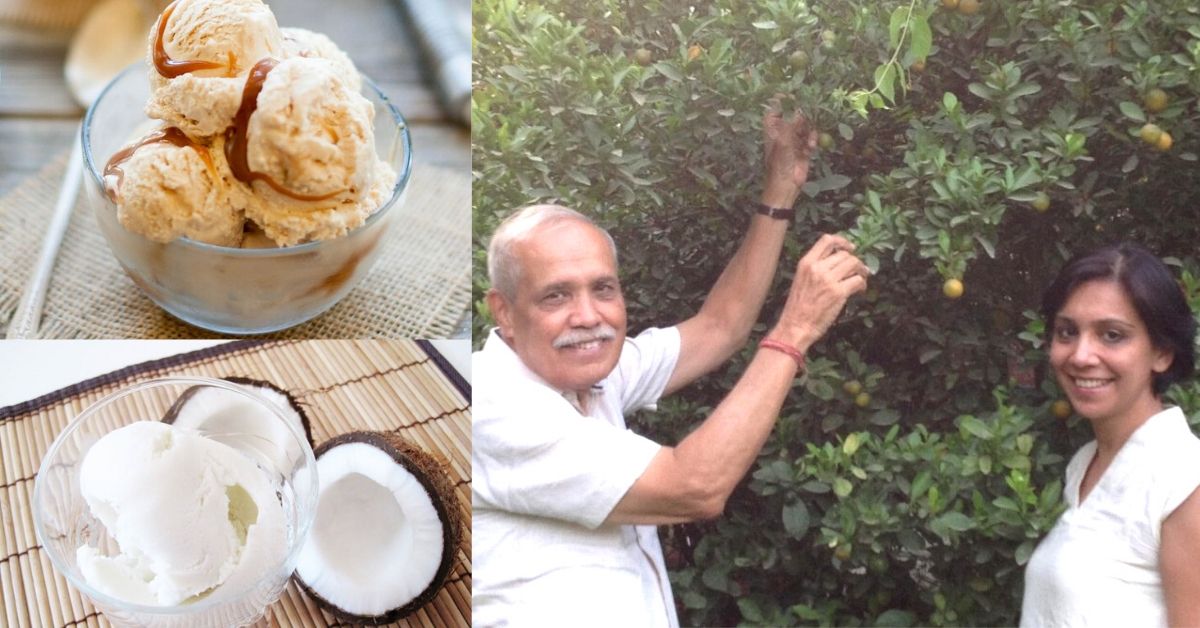 100% veg, no additives, all-natural ingredients — Pawan Malhotra makes over 100 flavours of guilt-free ice cream, many of which are sugar-free, lactose-free and even keto-compliant!

Tangelo, an artisanal ice cream brand in the national capital has a loyal clientele. And this customer base has been created over two decades by something others don’t pay much attention to — listening to their customers and serving them exactly what they want.

When a girl from Delhi University called up the Tangelo team and requested them to whip up lactose-free ice cream for her dad, who hadn’t eaten any for twenty years, they had the alternative ready soon. Another customer had put in a request for keto varieties, and it was soon a part of the menu.

Launched in 2018 by Pawan Malhotra, Tangelo ice creams are all-natural and preservative-free as they are made fresh by Malhotra and his wife Bina. They use brown sugar and honey.

While Tangelo as a brand is only two years old, Malhotra has been making ice creams for more than two decades since 1999.

“I cannot even begin to explain to you how much I love ice cream. It is unbelievable. It was my first and most passionate indulgence,” says the 72-year-old.

Malhotra grew up relishing the kulfis his father made using a wooden ice cream-making machine. Those kulfis enjoyed on hot summer afternoons turned him into a connoisseur. He had found the food he loved. What he had not known at the time was that the later years of his life will see him turning into an ice-cream maker himself.

And the story about how he started making ice creams is as fascinating as some of the flavours he whips up in his kitchen.

Malhotra began toying with the idea of making ice creams professionally when he was posted in Muscat, Oman. “Those days, one of the best ice creams, in my opinion, was from Godiva. But I was surprised to see the shelf devoid of them. It seems that I was the only customer who bought them and the store had decided to not stock them anymore,” says Malhotra, who was the former MD of a Mahindra group company.

That day, Malhotra spoke with the store manager and bought the entire warehouse stock (almost 200 tubs).

He knew he would have to figure out another long-term plan. He had to learn to make his own ice creams.

“One morning at about five, when the household was asleep, I slowly made my way to the kitchen. I did not want to disturb my wife. I put in all the ingredients into the mixer and in the excitement, forgot to close the lid. Out flew everything! I spent the next few hours cleaning up the disaster,” he chuckles.

Not one to give up, he continued working on making ice creams and gifted them to his friends in return for honest feedback.

The Demand Rose, and the Enthusiast Delivered

“I wanted to make the best ice creams in the world. From totally natural ingredients. And I should be able to make it anywhere in the world” — are the three mantras that Malhotra assiduously follows.

When he moved back to India in 2008, he was adamant about designing his kitchen to international standards. With rounded corners, epoxy flooring, and steel cabinets, the kitchen is Malhotra’s pride and joy.

As a hat-tip to his father’s wooden ice cream-making machine, he wanted to buy the same model and use it to make ice creams. His search ended in Lahore, Pakistan.

“From Chandni Chowk in Delhi to the Crawford Market in Mumbai, I looked everywhere for it. But, during a business tour to Lahore I found the machine. I remember carrying it back with me to India and for almost five years I made ice creams in it. I would make 20, 50 and 100 litres of ice creams — none for commercial purposes. I sent it to my friends and family for free,” he shares.

As demand for these delicious treats grew, Malhotra felt that it would be a good time to invest in a good ice cream-making machine. “After a lot of research, I finally settled on an Italian machine,” he adds.

Even at the time, building a brand was not on his mind at all. He was just focused on making the best ice-cream in the world.

Malhotra set up his first stall at his Delhi Gymkhana Club and though he now has many stalls and kiosks in malls and supermarkets in Delhi/NCR region, the Gymkhana stall remains his favourite.

“One of our best sellers is the Chocolate Tangerine ice cream and it was my daughter — Ayesha who came up with the name Tangelo,” he says with pride. Slowly and steadily Tangelo stalls came up at the Delhi Golf club, Panchsheel club, and at One Horizon in Gurugram. Customers can also get on to their website and order ice creams. The prices of the ice creams start from Rs 500 for a 500 ml tub. Their ice cream cakes begin from Rs 750 for 1/2 kg.

Though Malhotra has an orchard from where he sources his fruits from – like tangerines, chickoo, pomegranate, and lemons, he gets Alphonso mangoes from Ratnagiri and strawberries from Mahabaleshwar and a local farm, and the honey from an organic apiary in Punjab

“My chocolate ice creams are my best sellers. This includes the Belgian chocolate, chocolate oreo blast, chocolate fudge and even the chocolate tangerine,” he says.

Some others include the Alphonso mango, mixed berries, raspberries, and the coconut nolen gur.

“Every year I visit Kolkata in November-December and source the nolen gur from there. I also picked up tips on how to store it well to last me the entire year. It’s important for all the flavours we make to be available all through the year — none of it is seasonal,” he says.

All items on Tangelo menu are 100 per cent vegetarian with no additives. Though Malhotra has two house-helps who assist him, he does the primary work of making the ice creams, even today.

One of Tangelo’s regular customers, Dr Bornali Datta, Pulmonologist, Medanta Hospital, Gurugram says, “The process for ordering is smooth both through the website and directly through him. The range of fresh handcrafted ice cream is vast and tempting. Delivery is touchless and comes in large cold cases, keeping the ice cream well frozen.”

“Feedback is critical to me,” says Malhotra. “Whether good or bad, it’s what pushes and motivates me to work better. Even today, when a customer calls me and does not seem 100 per cent satisfied, I ensure that I work on winning them over. They are my ambassadors and I cannot afford to leave them disappointed,” he tells me.

“I wanted to get my daughter on-board. She is gluten-intolerant and thus wanted me to experiment with other unique variations and recipes. The idea of making vegan, lactose-free, and even keto, can largely be credited to her prodding. She urged me to create uniqueness and to do that she said I would have to experiment and find some niches.”

Thus began his experiments with making sugar free and then vegan versions.

“She constantly encouraged me to create something unique. I took her advice. I can say today that it was a very good decision to do that at the time I did.”

With that, he also managed to get Ayesha on-board. “Today I can say with certainty that no one has the kind of flavours in sugar-free and vegan ice creams as Tangelo does,” he says.

Always a stickler for perfection Malhotra gives us a few suggestions on how to eat ice creams.

“Let the ice cream thaw. So about 10 to 15 minutes before you plan to eat it, move it to the refrigerator from the freezer. Ensure that once you have served the ice cream, you put the rest away into the freezer as soon as possible to prevent ice crystals from forming on it,” he says.

If you are in Delhi/NCR, click here to order your tub of goodness today.