Scored 39% in 12th, Didn’t Know English: How a Village Boy Turned Around His Life to Crack IIT JEE! 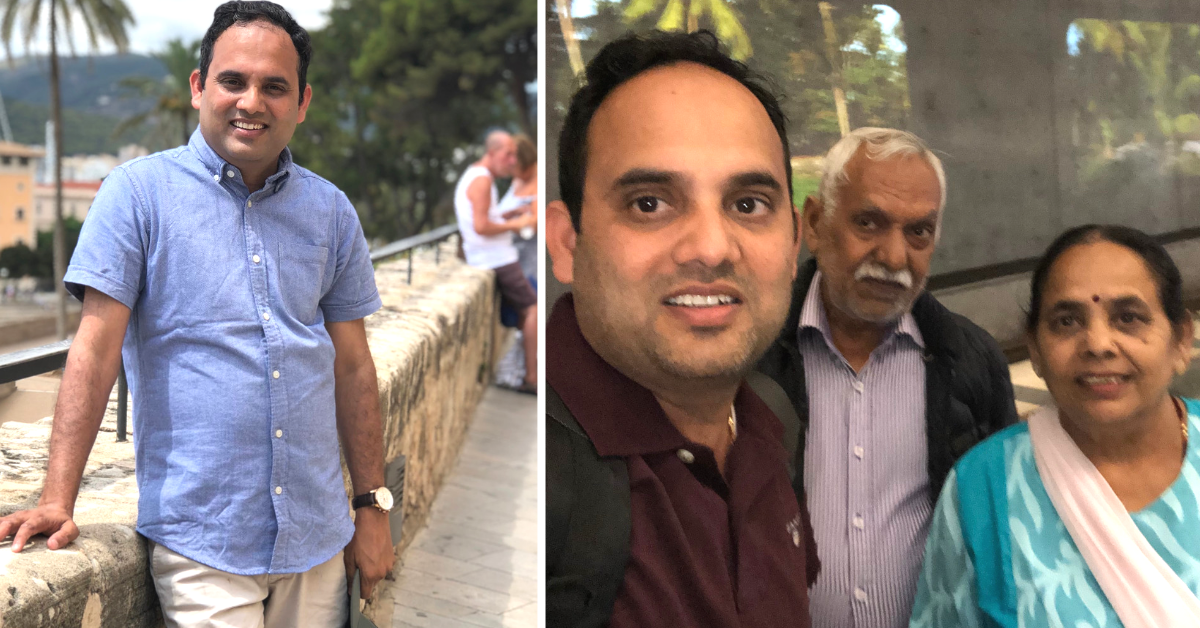 “I grew up in a very different time. We would wait for the annual examination to get done, sell our books and buy cricket balls with the money we made. That was how much value we attached to education.”

41-year-old Rajiv Dantodiya’s life reiterates the old adage which teaches us to believe in ourselves. Rajiv, who secured a mere 39 per cent in his class 12, studied at home, cracked IIT, and worked twice as hard to prove himself, currently resides in Sweden and works as a Senior Analytics Reliability Engineer with Tetra Pak.

The Better India spoke to Rajiv about this amazing journey.

Looking for a new hand bag? Check out this chequered tote bag made of upcycled jeans.

Born in a Rajasthan, Rajiv grew up in a middle-class family, with his father running a small factory and his mother, a housemaker.

“My school education took place in Samod and Dholpur in Rajasthan and to be honest, my background both financially and educationally wasn’t anything to write home about,” begins Rajiv. He says that he never expected to be in the position he is in today.

When Rajiv was growing up, academics was all about mugging up lessons, attending private tuition classes and passing the examination. “I was not cut out for that,” he says to me “I grew up in a very different time. We would wait for the annual examination to get done, sell our books and buy cricket balls with the money we made. That was how much value we attached to education.”

39 per cent in class 12 public examinations

“It was because of a few grace marks in Chemistry that I managed to clear my 12th examination in 1995. Once that happened, I started looking for options for higher education,” he says. With an interest in Science, Rajiv tried to apply for a Bachelor’s degree but his marks were low for a Science course.

It was around this time that Rajiv’s brother filled IIT examination application form and, just on a whim, Rajiv decided to take the exam too. “I went there and gave the exam with absolutely no knowledge of what it entailed. I did not even know that the fundamentals of what we learnt in grades 11 and 12 would be tested. I had assumed this needed some special learning and I remember investing in two or three books as well.”

For Rajiv, who came from a Hindi medium school, the English language was proving to be a challenge. “It felt like diving into a deep end of a swimming pool, without knowing how to swim,” he shares.

The journey of getting into IIT

When Rajiv decided to appear for the Pre-Engineering Test, Rajasthan, he approached a coaching centre. Unfortunately, the centre told him he was not eligible for the test due to his bad scores.

Undeterred, Rajiv began preparing at home for IIT with the help of books that a local bookseller suggested, and a Hindi-to-English dictionary which he says helped him immensely.

Once he started studying, Rajiv began to enjoy the learning and was bolstered with new confidence. “A turning point came when I was able to access some coaching material,” says Rajiv.

Subsequently Rajiv cleared the IIT screening in 2000 and this made him realise that his focus was in the right place.

“It was when I was all alone studying and clearing my doubts by practicing at home that I realised how much intellectual capabilities I actually had,” says Rajiv. One of the sayings that Rajiv lived by during that time, was that, what doesn’t kill you only makes you stronger. Rajiv cleared all the stages of the IIT examination in 2002.

Rajiv then pursued a 5-year dual degree program in Industrial Engineering and Management at IIT-Kharagpur. He then decided to do a PhD from Lulea University, Sweden.

One would assume that life became easier after Rajiv secured a seat in an IIT. Dispelling that, he shares, “Being at IIT was a whole new challenge. I remember the first time I applied for an internship I was turned away because they needed at least 60 per cent and what I had was 39 per cent. That was very stressful then.”

“During the second year of my journey in IIT, I realised that I would not be in a position to get any usual software placements. That was when I decided to do something different and I was the only one who decided to apply for a Ph.D.”

Rajiv has come a long way from the boy who was told he could not pursue Science to a man whose profession is engineering.

When asked what advice he want to give younger aspirants, he says, “This is my story, of my struggles and victories. Each one of you will have to chart your own course; make your own mistakes and learn from them.”

He leaves us with two words that he feels sums up his journey – ‘focus’ on what you want to achieve and have the dedication’ to get it.

Also Read: Setting Up Your Own Startup? 5 Legal Basics Every Entrepreneur Should Know!