22-YO Son of Petrol Pump Worker Beat All Odds To Crack UPSC in 1st Attempt! 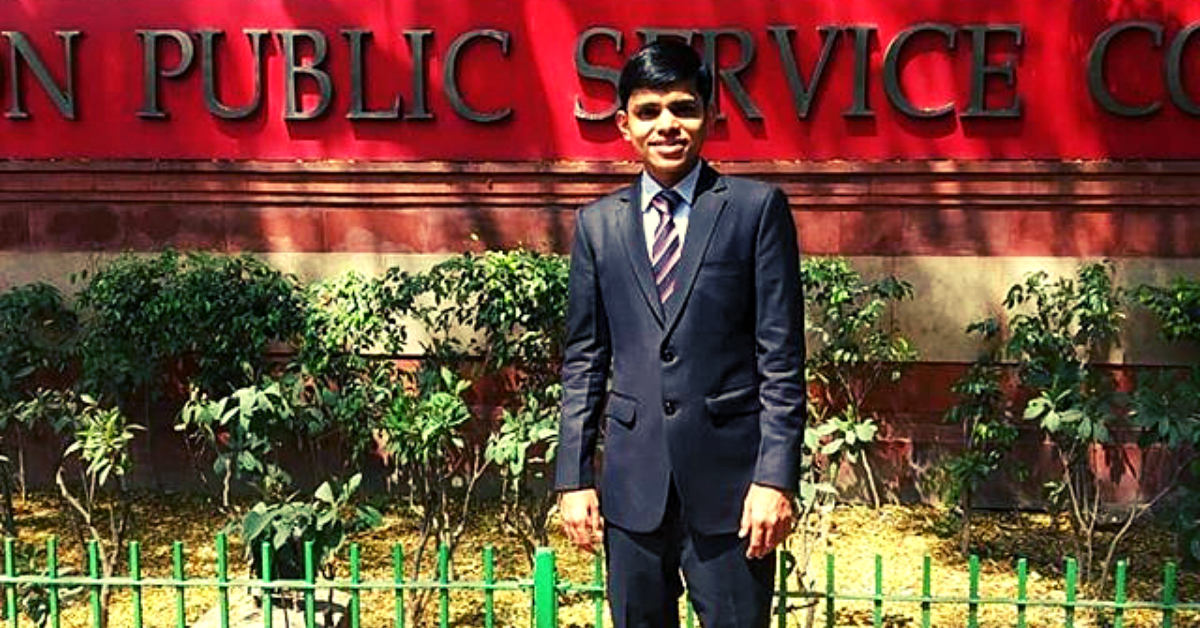 One of the youngest candidates appearing for the UPSC 2018 exams, Pradeep, the son of a petrol pump serviceman, cracked the exams in his first attempt at the age of 22!

5 April 2019, marked a very important day in the lives of over 759 candidates (577 men and 182 women) who cleared the coveted Union Public Service Commission exam. One step closer to their dream of serving the country in various roles like IAS, IPS, IFS, among others, future aspirants find succor in the success stories of those who rose up to the challenge and beat it.

Among these stories, stands out the tale of Indore’s Pradeep Singh. One of the youngest candidates appearing for the UPSC 2018 exams, Pradeep, the son of a petrol pump serviceman, cracked the exams in his first attempt at the age of 22!

In an exclusive interview with The Better India, Pradeep recalls how his father, Manoj Singh, who originally hailed from the town of Gopalganj in Bihar, migrated to Indore in 1991 in search of better education and employment.

Though the family had ancestral land, farming brought no steady income. The women of the household stayed back and took care of the land, while men migrated to bigger cities for employment to sustain their families.

Manoj took up the humble job of a petrol pump serviceman to make ends meet. In 1996, when Pradeep was born, he spent the first few years in Gopalganj. But for education, he moved to Indore with the rest of his family. From studying at a CBSE school to completing his B.Com (Hons) from IIPS DAVV, he spent the formative years of his life in Indore.

“My father struggled through and through as the sole breadwinner of the family and saved enough to buy a home. But we faced many periods of financial crisis. He tried his hand at several small-time businesses but did not find any success. And over a period of time, the financial debt constantly kept rising. And yet, he never let the stress affect us. He never compromised on our education. He even sold our home in Indore to fund my coaching for UPSC,” says a moved Pradeep.

When I asked him how the decision to pursue UPSC came about, he laughs.

“Growing up, I didn’t know what UPSC or an IAS officer was. But my parents often spoke with delight about the success stories of aspirants who had cracked the exams to become ‘afsars’ (officers). I would look on in awe at the joy on their faces as they tried to fathom how proud the parents of these achievers would have felt to see their children crack one of the toughest exams in the country and serve the nation.”

It was at that moment that Pradeep knew, he wanted to be the reason for the same pride and joy on his parents’ faces. The dutiful son wanted it all for his loving parents.

Pradeep recalls the last wish of his late grandfather who, on his deathbed, told Pradeep and his older brother to educate themselves and achieve something on their merit and hard work.

Another source of motivation was the change Pradeep witnessed first hand.

“Indore ranks among the leading cities under the Swachh Bharat Abhiyaan. This wouldn’t be possible without the work of the administrators. I saw how individuals as part of an administration could drive change and contribute to the greater good and development of the people they served. I wanted to do the same too.”

Moving to Delhi to prepare for the UPSC was a big decision. From coaching to accommodation, Pradeep knew it was more than his father could afford. And yet, Manoj decided to sell their home and move into a rented accommodation to help Pradeep achieve his dream.

Pradeep moved to Delhi on 17 June, two years ago. Already a bright student who had won several debates, quizzes and extempores, his preparation had started back in college where he kept himself abreast of the latest happenings in India and the world.

Even though there were times when the study material was expensive, Manoj never let Pradeep lose out. He ensured that his son had all the resources he required.

He sheds light on the challenges he faced while preparing for his maiden UPSC attempt, “I was new in the field and there are lakhs of aspirants. I knew there would be a lot of struggle but I was ready to fight my battles.”

He spent more than 14 hours preparing for the exam every day for a year.

“The schedule was set. Get up, shower and eat, all the rest of my time was spent studying. The distractions were rare. I had limited going out for films or hanging out with friends to a bare minimum. My father sacrificed a lot and I knew not everyone gets the opportunity that I had. So I treated my first attempt like it was my last attempt. I had to give it my best shot and prove myself.”

Before you think the process may have drained him, he is quick to clarify that he enjoyed the process of preparation thoroughly.

With every result that came—be it the prelims, mains or the final, the happiness of the Singh family reached new heights.

“Nobody in our family, including distant relatives, had cleared even the prelims. It was a matter of pride for my entire family. A lot of our close friends and relatives came home to congratulate my parents. After the results were declared, they did not sleep for three days. Because the celebrations were in full swing. When I returned to Indore, they took me to places. My parents were crying and laughing all at once. The joy on their faces was unmatched. My hard work paid off. All I was feeling was satisfaction.”

In a message to UPSC aspirants, Pradeep says, “Do not rely on coaching alone. Be a self-starter. Coaching will contribute about 8-10 per cent to the results. But 90 per cent depends on your hard work. If you want to pursue UPSC, think your decision through. Don’t pursue it under family or peer pressure. When it is your own decision, you will do well. Your motivation will come from within and at no point will you regret it. Yes, there will be a lot of struggle. But remember, the more you struggle the greater your chances at success.”

The results were only the first step, as he begins his journey into the civil services.

Pradeep whose journey as an IAS officer has begun signs off by saying, “As an IAS officer, any district that I am posted to, I want to focus on four key areas, namely law and order, women empowerment, health, and education. Because I believe all of these fields are intertwined and dependent on each other for a better society. As I step closer to my dream, I hope I am able to attain these for the greater good of the people I serve.”