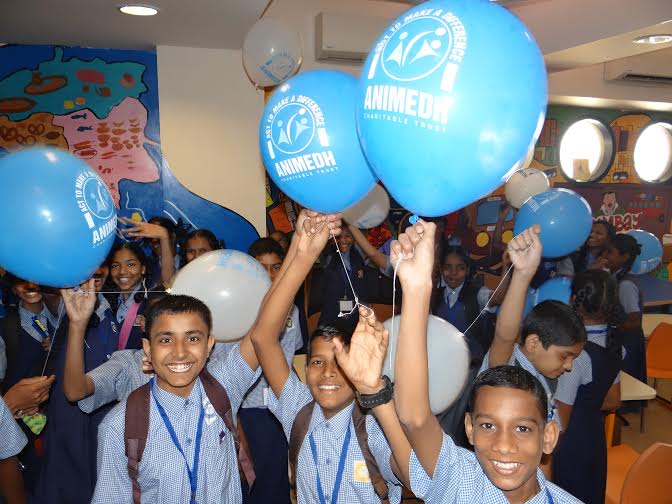 ACT provides various courses to the students to to make them more confident.
Promotion

From providing essential life skills training to extending help to existing NGOs, this team is creating sustainable impact in the lives of needy women and children in Mumbai. Read about their unique approach to solving problems and improving lives.

Manju Magoo, a visually impaired girl was struggling to get the right job. After completing her Post Graduation in Finance, she was looking for a job profile that could suit her academic qualifications. She thought of applying to SBI’s PO exams but she needed a scribe. That is when Nivedita Desai offered to help. Desai not only helped by writing the exam for her, but also gave her a voice enabled laptop which Magoo could easily operate.

Thanks to Desai’s intervention, Magu got a well paying job in a US-based firm and is now working as a successful financial consultant.

Many women like Magu have gone places due to direct intervention by Desai and her organization Animedh Charitable Trust (ACT).

When Nivedita Desai returned from abroad, she wanted to do something more meaningful with her time. This led to the inception of ACT in 2012 to provide support and social services to needy women and children.

“Initially I was brainstorming to see in what all areas I could intervene. I wanted to work with girls in red light districts but I felt I was very new to the field and might not be able to handle such a serious responsibility at that point of time. So I thought of starting with something that can have an immediate impact in the lives of the needy,” she says.

A family which was always inclined towards charity and social work came in handy, and finally ACT started its operations in Mumbai.

The unique approach of ACT enables the beneficiaries to decide the intervention they require. The ACT team talks to the needy women and children and identifies what help would benefit them the most, and accordingly an action plan is decided.

Through vocational and soft skills training, ACT is enabling poor women to become self dependent and more confident.

“We asked the ladies what they wanted to do and what kind of of help they required. A majority of them were not educated, so we launched tailoring and beautician courses for them to make a living,” says Desai.

“We saw a computer lab in a nearby school which wasn’t being used due to lack of a tutor. So we hired a computer teacher and started operations there. It’s been two years since we have been running it, and several batches have benefited from the computer training,” Desai says.

Working in five community centres at various locations in Mumbai, ACT is reaching out to over 500 people at present. In areas where they cannot directly intervene, they are helping out existing NGOs by providing technical and other support.

One of the beneficiaries of direct intervention by ACT is Priya Negi, a student in Bhopal. Negi comes from a financially poor background. After finishing secondary education, she could not afford the fees for a high school education. ACT intervened at this stage and has been sponsoring her education since then. Negi is a mass media student now at a prestigious university in Bhopal and is university topper every year.

“It feels so good to see that our efforts are actually being taken seriously and are helping someone directly,” says Desai.

Through their creative learning programme, ACT has been engaging various kids and making them more vocal and confident.

“They come from very different backgrounds. They are reluctant in opening up, they are shy and do not have much confidence. There has been a substantial change in their attitude since they started engaging with us,” says Desai.

Not only this, many women are now able to support their families’ day to day needs without being dependent on their partners. They are more self assured and look happier.

ACT has created their own space in people’s hearts now, but their journey wasn’t an easy one. They had to spend many days or even months doing their work without expecting any return. “People will only trust you if you show them good results. They got attached to us when they realized that we were actually creating some impact,” says Desai.

Desai and her team of 20 members, which include volunteers and teachers, now want to reach out to more people and expand to more areas of focus.

“The idea is to create a larger footprint but only target one community at a time. We want to go deeper and not just broader when it comes to change. It’ll be just a crack on the ground if we leave after an initial intervention. We want to make sure that there is a substantial and sustainable change in the lives, even if the number is small,” says Desai.

You can be a part of ACT’s acts of kindness and support their cause by buying their customized calendars of year 2015, which feature 12 amazing beneficiaries of ACT. The entire amount will be used for the upliftment of the communities they are working with.

You can help ACT by buying their customized calenders here.

To know more about ACT’s work, visit their website.