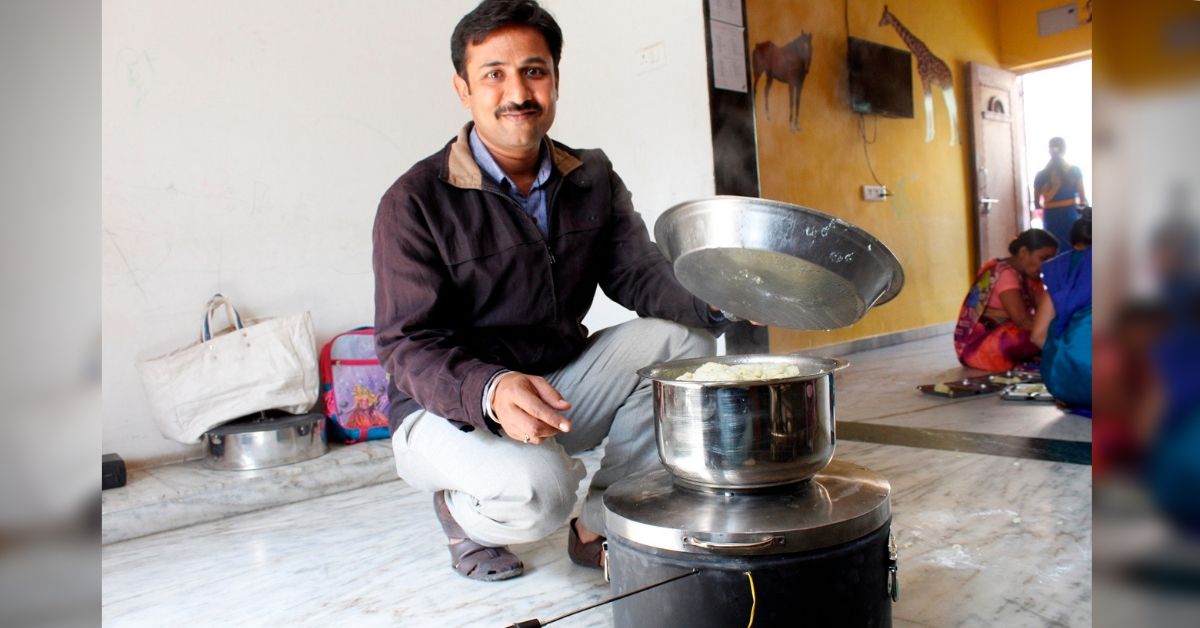 Dhaval with one of the prototyopes of the solar stove

After extensive research about the biggest issues that affected the global climate change, he settled to work on alternatives to clean cooking energy.

Dhaval Thakkar grew up in a lower-middle-class home in Deesa, Banaskantha which is located in the northern part of Gujarat. While he was an average student, he would find joys in smaller things, he liked looking at how things worked and were built.

He was pursuing his Masters in Computer Applications and was in Ahmedabad for his final semester, when a trip to the Sabarmati river, had a profound impact on him.

“I was shocked at its polluted state. It was a turning point in my life, and made me think about environmental and ecological issues that had marred us and what could be the possible solutions we could adopt.”

As time passed, he moved on to working as an IT professional in top MNCs including a seven-year-old stint with GE in Bengaluru.

However, the thought of wanting to do something for the environment continued to nag him at the back of his head.

It was only when he took an extended sabbatical in December 2006, and travelled to a remote place in Udupi, was he able to gather his thoughts and decide what his next step was going to be.

His stint at GE had given him exposure to newer concepts he wanted to learn about. After extensive research about the biggest issues that affected the global climate crisis, he settled to work on alternatives to clean cooking energy.

“At the time, more than 70 per cent of India and 50 per cent of the world’s population was dependent on chulhas and biomass to cook food. The need for biomass as cooking fuel further led to the cutting of trees. And despite that fact that cooking energy takes up less than five per cent of the total energy required, it contributes up to 20 per cent to climate change and global warming,” he says.

Smoke from cooking chulhas made of clay or stones, fuelled by firewood or dung, is a significant cause of indoor pollution. Professor Kirk Smith of UCLA estimates that inhaling this smoke is the equivalent of smoking 400 cigarettes per hour (note: per hour, not per day) and the WHO, in a 2014 report, estimated that this smoke kills 1.2 million Indians per year.

All these factors led Dhaval to innovate a solar stove that saves 80 per cent costs when compared to LPG and gives you a better and safer kitchen experience with zero air pollution.

Developed after an eight-year-long journey, the stove uses a proprietary thermal storage unit that stores solar energy to be used within next 72 hours.

“Our technology allows a stationary thermal energy storage in the kitchen and do everything from roti baking, roasting, frying, steaming, boiling and cooking food items on it, three times a day,” says Dhaval.

According to him, these are its features and benefits:

1) The energy stored in it after solar charging lasts 72 hours and used for three meals for a family. It also comes with the option of electrical charging during monsoons.

2) Its ergonomic design and lightweight system is safe to be moved for indoor and outdoor cooking.

3) It is non-hazardous, does not emit any additional kitchen heat like the LPG cylinder, toxic gases or electromagnetic waves and is the cleanest form of cooking energy.

4) It automatically tracks the sun at high accuracy.

5) The thermal storage comes with a secure plug-and-lock docking system. So, there are no chances of an explosion, short circuits or fire accidents either.

6) It has a simple and easy to operate control panel and user action alert system and also works with direct sunlight (DNI).

7) It is a better alternative to appliances that run using electric batteries to be changed at the end of a cycle.

9) It works with any regular flat bottom utensils.

10) The solar stove saves 80 per cent costs when compared to an LPG cylinder, which makes it almost ten times cheaper in the long run than any other alternative solution in the market.

You May Also Like: Assam Man Farms Fish in Rooftop Pond, Turns Kitchen Waste into Bio-Pesticides!

The Vadodara-based company that Dhaval founded to further the development of these solar stoves called UNesar private Ltd where “U” in UNesar stands for “you” and “Nesar” stands for “sun” in Sanskrit has received an undisclosed amount of seed funding from HPCL.

He claims that while the product was lab tested and certified, almost four years back, the company has not been able to scale it up due to policy gaps and missing direct support from the government.

“It is indeed unfortunate that India spends almost one lakh crore on the import of LPG, but isn’t even investing 0.01% of the amount in R&D to explore alternatives to it, whereas global standard demand between 1-2% investment in R&D,” he says.

He concludes with a message for everyone. “There is a dire need for policies to support indigenous innovations because until those are in place how will we scale the impact of our products to reach the common man? Vouching for renewable energy is vouching for a better life, economy and climate not just for yourself but also for your future generations.”

If this story inspired you, get in touch with Dhaval on info@unesar.in.