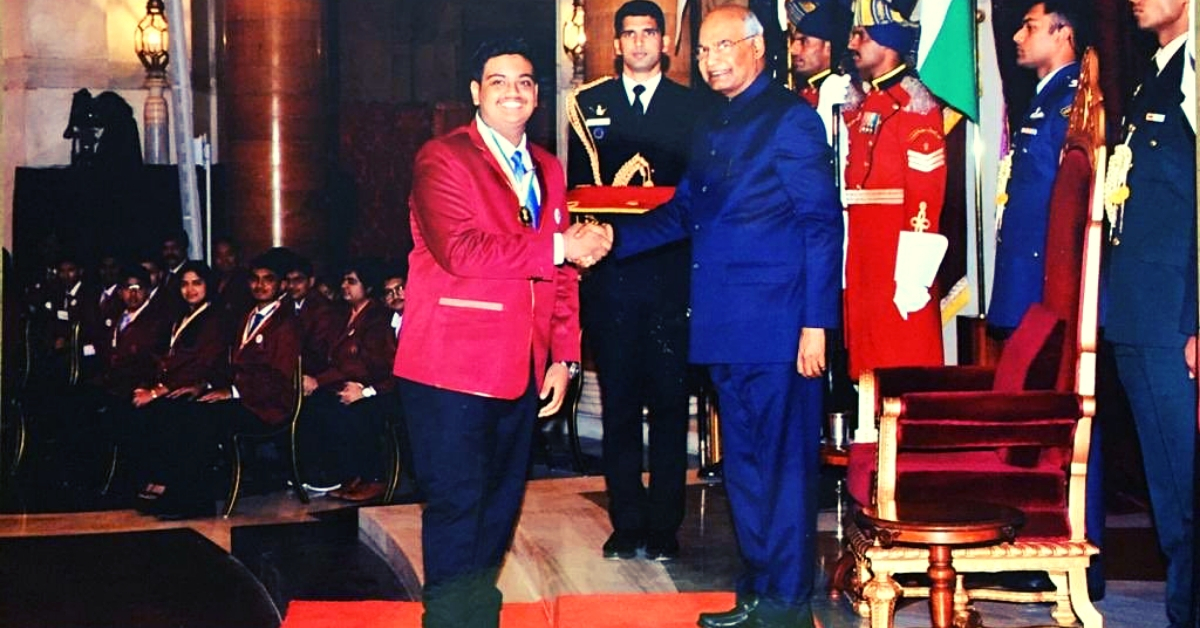 Naisargik Lenka isn’t your average 16-year-old preparing for his Class X board exams. A resident of Bhubaneswar, Odisha, Lenka is a budding scientist studying in the DAV Public School, Unit VIII, with aspirations to also become a social entrepreneur later in life.

Those ambitions received a further fillip earlier this month when the boy from Odisha was conferred with the prestigious Pradhan Mantri Rashtriya Bal Puraskar (National Child Award) in the Innovation category.

Naisargik Lenka is 16 and at such a young age, he worked on innovative solutions for remediation of contaminated soil and water, a method of treating municipal waste water and a smart toilet model which has been named ‘Swachh APT.’
A fitting recipient of the Bal Shakti Puraskar! pic.twitter.com/JxkDGZzY54

After receiving the award, Lenka had the opportunity to interact with Prime Minister Narendra Modi, who spoke to him and other recipients of the award about their respective projects and how they developed their ideas.

Following this interaction, the PM delivered a speech. Lenka recalls the experience with great fondness, calling it “wonderful.”

As mentioned in the above tweet, Lenka has developed three innovative solutions for everyday concerns.

The smart toilet model—Swachh APT—for example, was developed when the government announced its Swachh Bharat Abhiyan initiative. This is an innovative solution aimed at saving water in conventional toilets.

The smart toilet can be operated using a mobile phone, which need not be a smartphone. A basic phone with call features will also suffice.

Not only does this system flush the toilet automatically after use, but it can also purify and recycle the toilet wastewater so that can be used again as flush water.

Lenka has also developed a method to treat municipal wastewater with the help of green algae. This isn’t entirely new, and many researchers around the world have experimented with the idea.

“Microalgae culture offers an interesting step for wastewater treatments because they provide a tertiary biotreatment coupled with the production of potentially valuable biomass, which can be used for biofuel production (bio-fuel and biofertilizer). [They are] an elegant solution to tertiary treatments due to the ability of microalgae to use inorganic nitrogen and phosphorus for their growth. And also, for their capacity to remove heavy metals, as well as some toxic organic compounds, therefore, it does not lead to secondary pollution,” says this research paper by a IIT Roorkee researcher.

Having said that, “this innovation has the potential to generate employment opportunities for self-help groups, and the poor,” particularly with the generation of bio-fuel and bio-fertiliser, says Lenka.

However, his longest-running project spread across 1.5 years, and possibly the most important, is the remediation of soil and water contaminated by chromium mining.

“Chromium mining is common in Odisha’s Sukinda valley, and consequently, Hexavalent chromium (Cr (VI)) finds its way into the soil and water bodies. It is the biggest source of pollution in these mining areas. Excess exposure to Hexavalent chromium can have a very harmful effect on your health, leading to asthma, respiratory issues and kidney damage as well. Approximately 30 lakh people in the area have developed cancer, as a result of this,” says Lenka.

Also Read: IIT Student’s Low-Cost Solutions Can Turn Your Home Into a Fully Automated Smart One!

Lenka has developed a bioremediation method for toxic and highly carcinogenic hexavalent chromium. He is treating it with a locally selected indigenous strain of bacteria called Anabaena Cyllindrica, which is integrated with newly-synthesised polymers that keep it immobilised. He states that this particular strain can prevent the chromium from entering the food chain.

The bacteria can be used in crops and water body for filtration. Farmers can take the bacteria out of the field after the harvest is over. Based on recent experiments and studies conducted, Lenka claims that rice production has risen by 57%.

Assistance for this endeavour came from Salabala Padhi, the former Director of CSE (Centre for Science and Environment) and later on, Kishore CS Panigrahi, a Professor at the National Institute of Science Education and Research (NISER), where Lenka has been carrying out his research.

How did Lenka hear about the plight of workers labouring in the mines of Sukinda Valley in Jajpur district?

Well, Lenka is a native of Nilambarpur in Jajpur district, Odisha, and was deeply affected when he read about people from his district suffering from cancer and other diseases.

“Living in the city gives people like me a life of comfort and luxury. But what about those who allow us to acquire such luxury? Why should they lead a life of deprivation? Chromite mining, for example, only feeds our desire for luxury. Using chromite, we get stainless steel utensils that don’t corrode and other luxuries like wonderful watches. However, the production of chromite also results in serious problems for so many people. Thus, it’s our responsibility to do something for them as well. That motive drove me to conduct research in this field,” says Lenka.

The product is still in its development phase, and there is still some way to go. However, there is no doubt that it has the potential to save lakhs of people from the perils of chromium mining in Odisha.