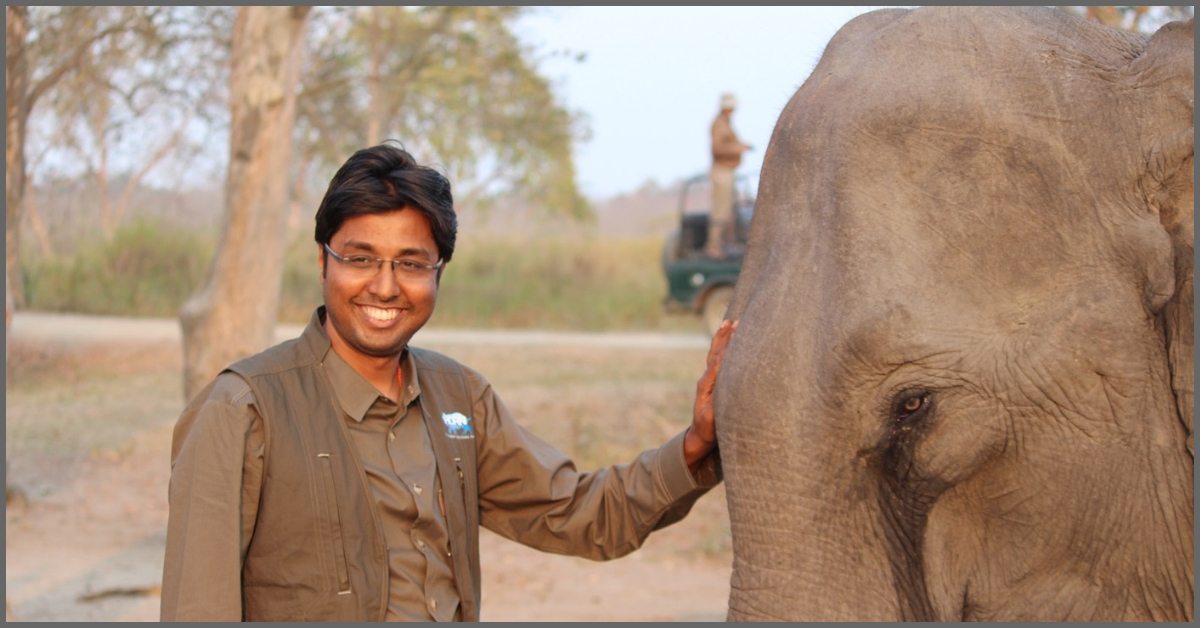 Rohit’s fight for conservation of our natural heritage continues. However, this is no small quarrel. It is a fight against the high and the mighty.

Species that survived colossal calamities and evolved over millions of years are now on the verge of extinction, thanks to us.

However, there are many humans who are champions of the wild. One such person operates in the Kaziranga National Park & Tiger Reserve (KNP & TR) area—Rohit Choudhury.

An RTI and environmental activist, Rohit was honoured with Sanctuary Nature Foundation’s Wildlife Service Award 2018 on December 7th, for his work in the Kaziranga landscape.

Coming from the humble town of Bokakhat in Assam, Rohit has successfully fought several battles against the violation of wildlife laws in Kaziranga, Manas Tiger Reserve (both World Heritage Sites), Deepor Beel wetland (a Ramsar Site) and surrounding areas.

The National Highway-37 winding through KNP is an eternal curse on the park’s wildlife. Animals were found dead or hurting near it every day. Choudhury’s RTI application revealed 251 Kaziranga animals getting killed on NH-37.

In 1991, when the Ministry of Environment & Forest (MoEF) gave a clearance to the Ministry of Petroleum for setting up an oil refinery at Numaligarh in the Golaghat district of Assam, one of the conditions was that the stretch of NH-37 from Jakhalabandha to Bokakhat should be denotified from all highway records of the National Highway Authority of India (NHAI).

Even after 23 years, these conditions have not been fulfilled. Added to this, under the very nose of the administration, illegal expansion of the road was being planned.

Rohit filed a plea against this move before the National Green Tribunal (NGT) and also sought its intervention for precautionary measures to avoid the road kills of the innocent animals.

Upon hearing this plea, the tribunal reprimanded the authorities and issued bailable warrants against them. It not only voided the illegal expansion but also ordered the installation of sensors, barricades, issuance of challans and other speed control measures with immediate effect.

All thanks to him, today, no vehicle is allowed to cross a speed of 40 km/hour on the stretch of the NH-37 passing through KNP.

Due to his fight, the Assam government has now proposed to construct six flyovers over the animal corridors of KNP.

Another tough battle he has been fighting is against the Public-Sector Undertaking Numaligarh Oil Refinery Ltd (NRL), right at the edge of KNP and close to the land proposed for Deopahar Proposed Reserve Forest (PRF).

As a part of its township expansion process, the NRL created a golf course by clearing forest spread over several hectares and built a 2.2 km boundary wall. This was done on the proposed land for Deopahar Reserve Forest.

More disturbing was the wall blocking the crucial route of elephants between Kaziranga and the Karbi hills.

Also Read: Here’s Why Punekars ‘Give a Hoot’ About the Dr Salim Ali Bird Sanctuary

Nobody heeded the death of a seven-year-old elephant calf in 2015, but it created outrage among the environment lovers and activist circles. The male calf reportedly died due to haemorrhage from banging against the wall. Video footage of elephants trying to cross the high wall was also captured the same year.

Rohit launched a campaign to tear down the wall and filed a case against the company’s illegal construction before the NGT, which subsequently quashed all arguments of the industry giant and ordered demolition of the entire wall within a month. The golf course was ordered to make space for the forest once again.

But, orders, many times remain on paper, while the ground reality continues. The wall also remained where it was. And the elephants continued to suffer.

Rohit once again approached the NGT and this time, fearing a huge fine, 289 meters of the 2.2 km wall was torn down by the company on March 13, 2018. The case is still going on as NRL has filed a fresh application in the Guwahati High Court.

On 20 April 2018, thanks to Rohit’s efforts, the National Tiger Conservation Authority (NTCA) banned all mining and stone crushing activities in the Kaziranga and Karbi Anglong landscape. Rampant illegal mining and stone crushing was going on right outside the park which severely damaged the ecological balance of the landscape. Rohit had meticulously gathered all evidence about the illegal activities and filed a complaint in this regard in October 2017.

The panel was angered on the inefficacy of the authorities and submitted a report asking the state government to ban all mining and stone cutting activities in the area.

Apart from this, Rohit is also known to have secured an order from the NGT that ensured the closure of polluting industries like brick kilns and stone crushing units, which cause irreversible damage to the environment in the No Development Zone (NDZ) of KNP.

He is also fighting to save Deepor Beel, one of the 26 Ramsar Sites in India, a wetland site designated to be of international importance, as a destination of migratory birds.

Unfortunately, the entire garbage of Guwahati city of Assam is dumped on the periphery of Deepor Beel.

Rohit approached NGT for correcting the wrong, after which the body issued a notice to the state government to shift the Municipal Solid Waste dumping site from its present location. The matter is presently subjudice.

Rohit’s fight for conservation of our natural heritage continues. However, this is no small quarrel. It is a fight against the high and the mighty.

His family has been receiving life threats for what he is doing. Constant pressure to withdraw cases has failed to deter him. For all the threats and pressures, he has one answer, “I won’t give in”.

He states, “There is no question of giving in to the pressure. Someone has to take the responsibility. Wildlife is something which once lost, will never come back.”

You May Also Like: Don’t Destroy Nature: How to Be a Considerate Wildlife Enthusiast

Founded in 1981 by Bittu Sahgal, Sanctuary Asia is one of most the popular wildlife magazines in India. It serves as a forum for wildlife groups, concerned individuals and non-profit organisations in the country.

The Sanctuary Wildlife Awards were established in 2000 to recognise the individuals who have done exemplary work for the protection of wildlife and natural habitat. Every year, nominations and entries are invited from across the country to select the best and brightest in the field.

The winners are chosen through a gruelling selection process, and the awards are given for the four prestigious titles–The Lifetime Service Award, The Wildlife Service Award, The Green Teacher Award and The Young Naturalist Award. Each category, like the nominees, is unique in its own way.

Parikshit Suryavanshi is a freelance writer, translator and researcher.