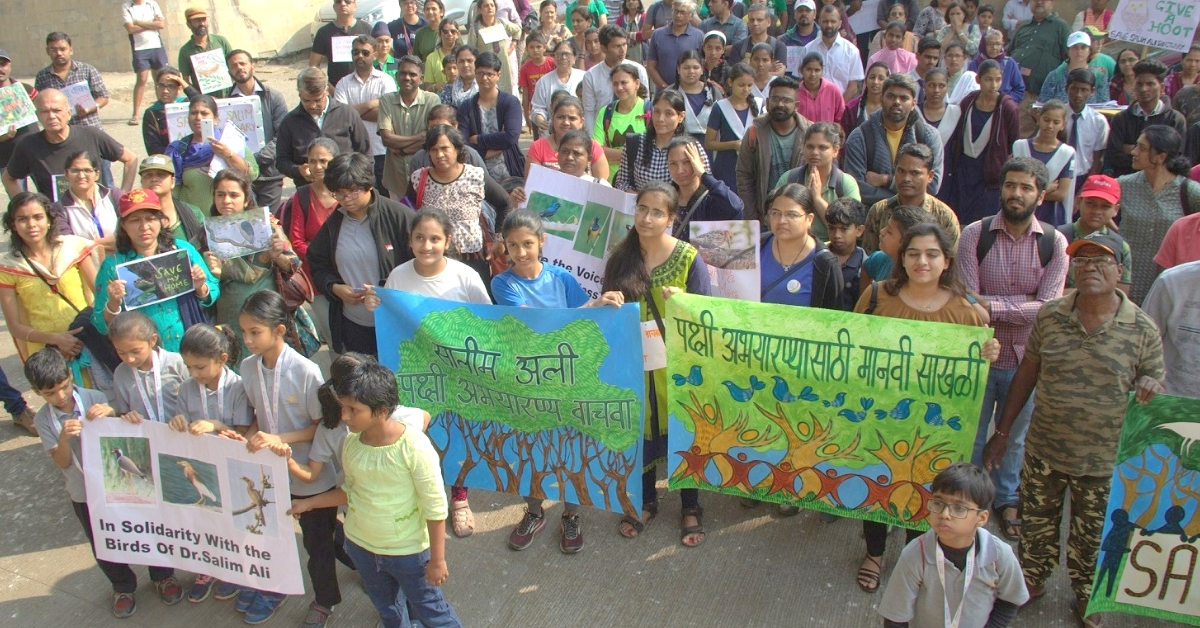 Children as young as eight and senior citizens as old as 83 stood in the human chain, demanding that the road destroying the sanctuary and the metro work, be stopped immediately.

The threat to the Dr Salim Ali Bird Sanctuary in Pune brought 740 people out on the street to form a human chain on a bright winter morning.

The Pune Municipal Corporation’s road from Shivane to Kharadi cuts through the Sanctuary, which was established in 1973, by city-based ecologist late Prakash Gole, and inaugurated by birdman Dr Salim Ali.

At least 167 trees will have to be cut or transplanted to make way for this road.

Citizens have already objected to this attack on the trees through communication to the Tree Authority.

On the other hand, the PMC road department says it has no intention of stopping road construction.

Children as young as eight and senior citizens as old as 83 stood in the human chain, demanding that the road destroying the sanctuary and the metro work, be stopped immediately.

The Bird Sanctuary, which is on the banks of the Mula-Mutha River, is home to at least 105 species of birds—international migrants, local migrants, as well as residents—who visit the area for nesting and breeding.

One of the organisers of the protest, ornithologist Dharmaraj Patil, explained that migratory birds are a crucial part of the ecosystem, the river bank in this case.

“These birds feed on invertebrates like worms, pilae and snails. Even if the number of migratory species visiting this area are few, each species is present in large flocks. These birds thus keep a check on the population of invertebrates,” he said.

The second aspect of their importance in the ecosystem is that birds of prey come with these large flocks of birds, he adds. These birds of prey feed on the resident birds too, and so keep a check on their numbers.

“If that didn’t happen,” Dharmaraj explains, “there would be too many resident birds, they would finish all insects and invertebrates, which is also the prey for other migratory birds. This would cause a collapse of the system.”

Migratory birds are required to maintain an ecological balance, he stresses.

Having said that, he doesn’t believe that this is the only purpose of these birds. He continues, “Birds consider the entire Earth their home; many migrate long distances. This aspect hasn’t been studied much yet, but I believe that they keep the entire ecosystem of the Earth connected. We are obviously not against development. But it simply won’t be possible to recreate a sanctuary like this. We need to pressurise the system to conserve the sanctuary, not just for ourselves, but for the entire city.”

Also Read: Before ‘Saving The Environment’ Was a Catchphrase, The Chipko Movement Showed Us How It’s Done

India has been witness to other protests to save biodiversity, the most memorable being the Chipko movement. Amrita Devi Bishnoi, her daughters, and 300 people had laid down their lives to protect trees that were to be cut by the King’s men. The King ultimately called off the cutting, and this incident inspired many movements.

In 1974, people in Uttarakhand’s Chamoli district used the same non-violent strategy to save their forests from contractors. In Kerala, the Silent Valley was declared a National Park following the Save Silent Valley movement that lasted ten years. Thousands of people, who weren’t even locals, made multi-pronged efforts to make this happen.

The Jungle Bachao Andolan of the early 1980s was a people’s movement, started by the people of Bihar, to protest against the replacement of sal trees by teak plantations.

These movements also spread to Jharkhand and Odisha.

The human chain, also a silent protest, was organised by the citizen’s group Save Salim Ali Bird Sanctuary. Some of the organisers saw that more trees had been hacked inside the Sanctuary in the three days that they had not checked.

“We don’t even know when this happened. We have formally objected with the Tree Authority about the cutting of these trees. And because we haven’t been given a hearing yet, these trees cannot be cut,” said Mahesh Goudelar, a bird watcher who has been visiting the sanctuary for the last 15 years.

“We have also given a letter to the PMC commissioner that the Tree Authority is not addressing our objections; there has been no response to that either,” he added.

Once the PMC issues a notice about the trees that are to be cut, the notice is posted on the tree in question.

Citizens who object to this have 30 days to formally raise an objection with the Tree Authority, which falls under the jurisdiction of the PMC.

Other organisers, who are regular visitors of the sanctuary, said that there are signs of damage on the trees that are scheduled to be transplanted. They have seen trees with cuts, some that have been debarked, and others that have just toppled over for no reason.

The PMC claims that the road has to be made because it is part of the Development Plan. They want to build it to divert the traffic on the main road, the Nagar road.

The MLA of the area, Jagdish Mulik also supports the road. “This road is important to ease the traffic on Nagar Road. Like we have planted trees along the side of the road in other places in this constituency (Vadgaon Sheri), we will plant trees just outside the Sanctuary. We are ready to plant five trees for every tree that’s been cut,” he said.

“I don’t know how they (PMC) are doing it, but the road is being built illegally,” she said. “Besides, alternative roads already exist to ease traffic on Nagar road,” she added.

Two boards identifying the location of the park were put up only two weeks ago.

School students from Mrs Erin Nagarwala Boarding School, School of Life, and Babu Jagjeevan Ram participated in the march enthusiastically. Adults from Inner Wheel Club of Poonawala Downtown, Area Sabha Association of Pune, Robin Hood Army, Save Vetal Tekdi Group, among many, stood patiently with placards for an hour as vehicles zoomed past.

“We can’t survive without our trees and birds. These are the last remaining pockets,” said Jasmine Dalal, the administrator of the Mrs Erin Nagarwala Boarding School.

Herstudent Tania George added firmly, “They should not build the metro here.”

Protestors also spoke of the importance of these pockets for the future. “This place must be passed on to the next generation,” said Ankita Yadav.

Meanwhile Barrister J M Baphna, 83, said, “The government really should have taken initiative and protected this important area themselves.”

Citizens submitted a complaint against the most recent tree cutting to the Yerwada Police Station on the afternoon of December 8.

As their next step, the group is going to explore legal options to save the trees. They also plan to amp up mobilisation for the Sanctuary through activities like bird walks in the Sanctuary, programmes in schools, and of course more protests.

They are also going to continue communicating with the PMC to resolve this problem, and also discuss how the metro is going to affect the Sanctuary. And finally, the group also plans to spread the word through the media.

Patil concluded, “People will be more connected to the Sanctuary when they are acquainted with it more closely.”

(Written by Shatakshi Gawade and Edited by Shruti Singhal)