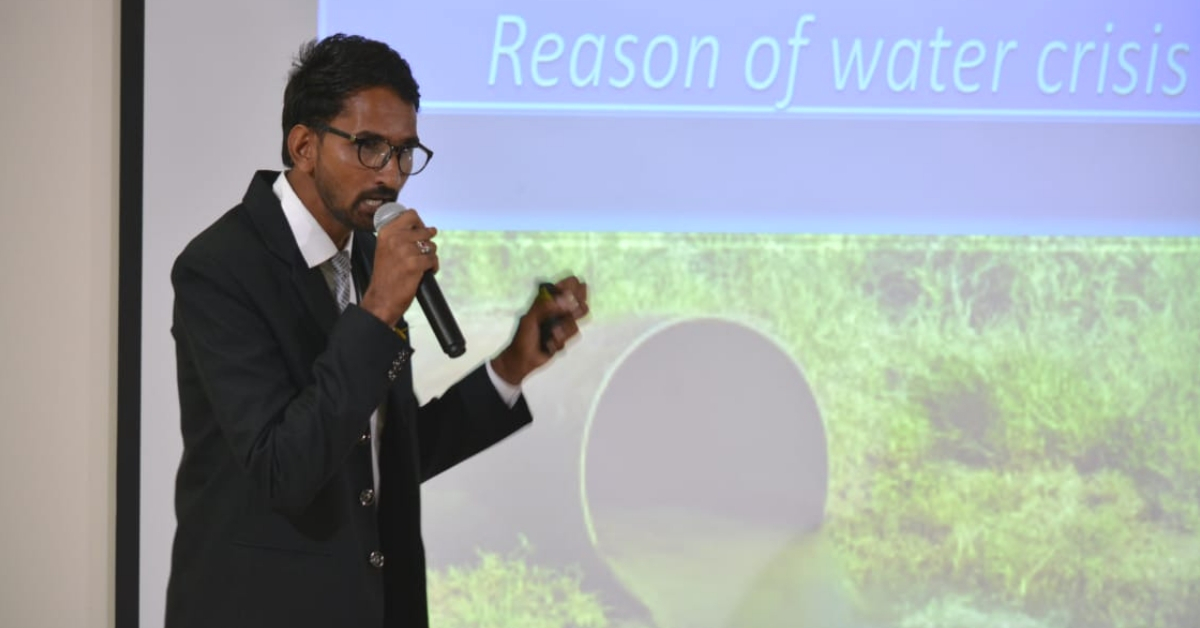 “I realised how water is one resource we can only reuse and recycle but never manufacture. And so I had to find a solution.”

Water is undoubtedly a necessity for everyone, but for several drought-hit rural villages in India, it is considered to be a luxury.

A classic example of this is the heartbreaking story of the water wives of Dengamal in Maharashtra. Dengamal is a village that has been hit by severe drought in the last few years, and its men marry women solely to fetch water for the household.

Growing up in a remote village in Ratlam, Madhya Pradesh, Jitendra Choudhary’s first exposure to the gravity of water scarcity happened five years ago.

Born to marginal farmers, the young boy had failed his Class 10 exams and decided to move to Rajasthan to give education a second shot. After Class 12, he prepared to crack the much-coveted IIT exam, but to no avail.

A few failed plans later, the young boy returned to his home state and completed his degree in Mechanical Engineering from MIT Ujjain. It was during a trip in 2013 into the interiors of the state, where he first noticed the jarring water crisis.

“I remember the day very well. I saw locals sitting on a cot and bathing with a small container. The water that cleansed the dirt and sweat off their bodies was collected in another vessel underneath and reused for other household purposes like washing clothes, watering plants etc. It rattled me. I realised how water is one resource we can only reuse and recycle but never manufacture. And so I had to find a solution.”

The answer to this was in the innovation he built. Named Shuddham, this low-cost water filter can filter 90,000 litres of water in six months and uses no electricity!

As a child, Jitendra idolised Dr APJ Abdul Kalam. He was always inclined towards machines that were solution-based, but studying in a government school, he had limited exposure.

“If I had passed my Class 10, I would have pursued humanities like all my other batchmates. So I am glad I failed that year, because until I moved to Rajasthan, I didn’t even know science existed as a stream. Besides, the film ‘3 Idiots’ inspired me to pursue engineering. It gave me the confidence to use innovation to improve the lives of the marginal communities in India,” he says.

During his research, Jitendra observed how 20% of the water we use is for drinking and cooking, whereas 80% is for all other personal household purposes like bathing, washing, cleaning, flushing etc.

Shuddham has the capacity of repurposing 500 litres of dirty water per day for all kinds of household usage except drinking and cooking.

Built at the cost of Rs 7000, the maintenance cost of the machine is as low as Rs 500-700, which is only required once a year, to replace the granules in the machine.

Using zero electricity, ‘Shuddham’ works on the principle of gravity, where it repurposes water used in washrooms, by making it undergo a series of filtration procedures and then releases the recycled water from the machine’s lowermost segment.

“The water is cleaned within a span of a few minutes through granular sieving which is later followed by active carbon ultrafiltration. The machine is also equipped with an anti-choke mechanism. This ensures that there are no blockages in the flow of the water and that dirty granules do not mix with the clean, purified water.”

The 25-year-old who has filed three patents for Shuddham and published four papers in national and international conferences was bestowed the Youngest Scientist Award by the Madhya Pradesh Council of Science and Technology.

Jitendra is also working as a research scientist for his alma mater, MIT Ujjain, where he innovates machines for community solutions. The institute funds his work.

He ran a pilot of Shuddham in the premises of the institute by installing four machines in the hostels. The results have been positive. He is now working on dropping the costs even further to make the innovation even more affordable for the drought-hit villages in his own state and surrounding areas.

Once the patent is approved, the machine will be commercialised and put out for sale in the market.

“When I started the process of building the prototype, I knew I was building something for rural India, so it had to be cost-effective. At a time, when most of our villages even lack electricity, I wanted it to be one that worked without any. I am still working on an updated machine. One thing that I can proudly claim is that Shuddham is the most cost-effective filter that repurposes dirty water at a meagre cost of 1 paisa per litre. Once it hits the market, we also planning to make it available for below poverty line (BPL) families at the cost the company builds it on,” says Jitendra.

From a young boy who worked as a farm labourer for Rs 200 to winning the Young Scientist award, Jitendra’s journey is nothing short of incredible.

While his financial background hasn’t improved much, the young innovator hopes to contribute the rest of his life to the service of the nation just like his role model, Dr APJ Abdul Kalam did.

“I may not be able to contribute as much as Dr Kalam did, but I will try my best to serve the country. My request to other innovators and scientists is also to not leave India for better opportunities outside, but use their knowledge and experience to make the country better. You may make more money outside, but the love and respect that your nation can give you is unmatched,” says Jitendra.

He signs off with a message for youngsters. “Don’t stop in the face of struggle. Keep trying. Even if the road ahead seems difficult, focus your energies on overcoming every obstacle one day at a time. If you give your 100 per cent, nothing can stop you. So keep moving towards your dreams and goals.”

If this story inspired you, get in touch with Jitendra at jchaudhry9694@gmail.com