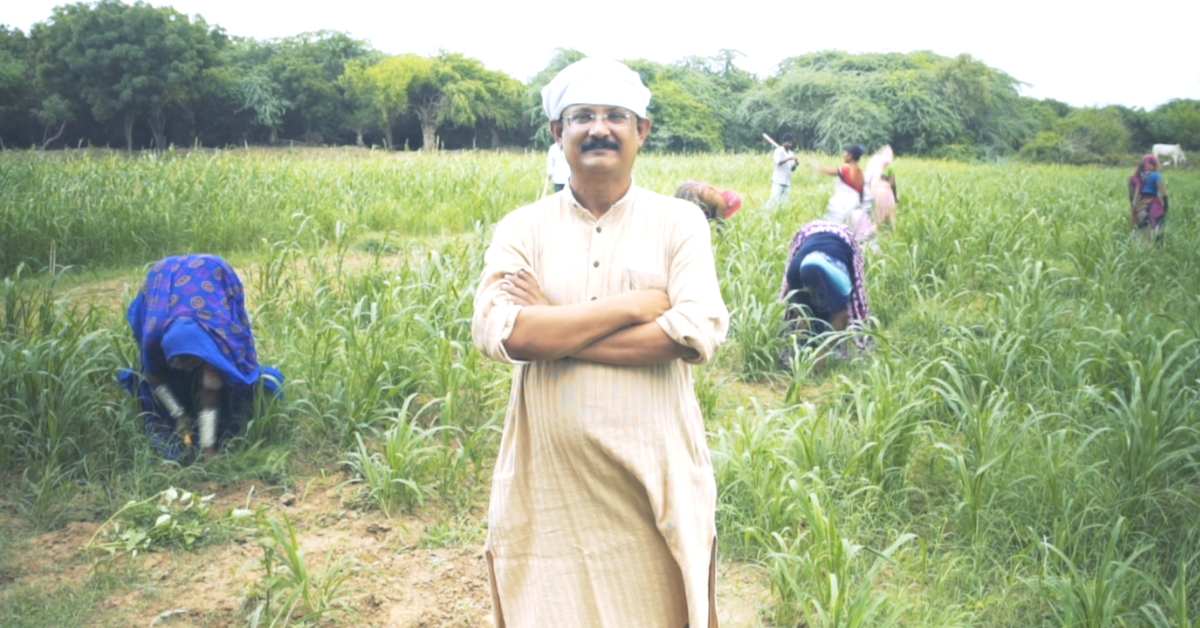 The underground reservoir can hold 40 million litres of water and can supply for as long as seven months.

True guidance is like a small torch in a dark forest—it doesn’t illuminate everything at once, but gives you enough light to safely take the next step forward.

All of us have undoubtedly had several guiding forces, who with their experience and rare insight, have helped us secure our sails and safely navigate through adverse and testing times.

Biplab Ketan Paul is one such name, and farmers across the country are indebted towards him, as his unique water harvesting technology has not only helped them raise crops through phases of water scarcity but also prevent crop destruction that occurs due to waterlogging after unseasonal rainfall.

Bhungroo, which means “straw” in Gujarati, is one of the technologies delivered by Naireeta Services—a social enterprise working for the eradication of poverty in India, which was conceptualised and transformed into practical application for farmers by Biplab.

With about 25 years of experience in the water sector, the 48-year-old came up with the idea after the 2001 Gujarat earthquake, when he noticed how the temperatures soared in the state a few months after the disaster, leading to acute scarcity of water.

“This was then followed by the monsoon, heavy rainfall and immense waterlogging in the fields. These were the varying challenges for the same place in different months of the year, and the important thing to notice was that each challenge could act as a solution for the other. For example, the excess water that was a disaster when above the ground could be a boon if stored underground,” he said to The Better India.

With this concept in mind, he went on to establish Bhungroo—a water harvesting technique that uses an injection module to store excess rainwater underground. Farmers can then use the same water for irrigation during summer and winter.

The system consists of a pipe erected in such a way that excess water passes through it, gets filtered and accumulates in an underground well. Later, farmers use a motor to pump the water up and use it for irrigation. In this way, farmers get a chance to earn double of what they would normally make. The technology also helps avoid evaporation loss and wastage of water during the monsoon season.

The underground reservoir can hold 40 million litres of water and can supply for as long as seven months. Additionally, the non-saline rainwater, when mixed with the underground saline water, brings down the salinity of the groundwater and makes it fit for agriculture.

Bhungroo comes in 17 designs for different agro-climatic zones in India, and the design varies for each field, and its cost has been subsidised under the National Rural Livelihoods Mission (NRLM). Farmers from underprivileged backgrounds, or those affected by drought, do not have to pay a single rupee for the installation, while others need to pay a subsidised fee of about ₹5,000.

The entire process of setting up Bhungroo is led by women, who are trained by Naireeta Services, or the partner organisations. Founded by Trupti Jain, Naireeta Services works with underprivileged women in both rural and urban India.

“Our aim at Naireeta Services is Antyodaya—a word used by Mahatma Gandhi that means serving the last person in the queue in the best possible way. In rural India, the last person is the smallest landholder who does not have any water service for his/her crop,” says Biplab.

Biplab has worked with more than 14,000 farmers and transformed 40,000 acres of barren or disaster-affected farms.

In 2015, at the UN Climate Change Conference (UNCCC), Bhungroo received the ‘Momentum for Change’ Award in the Women for Result category for keeping women farmers at the centre of innovation.

Attributing women being capable of leading and driving high-impact social change, he proudly adds, “I have worked with women who had to migrate to the cities for work because farming was failing for them. Today, they are working on their own land, have their own houses and can work towards a better future.”

Just like Biplab, each of us needs a mentor or a guide at all stages in life — whether as students, employees, businessmen or investors. A mentor or guide works for our betterment and provides holistic, unbiased inputs, especially when we need to take tough decisions during daunting times. In the same way, a professional financial advisor works towards achieving our life goals by meticulously planning our investment journey and hand holding us in volatile times so that we do not deviate from the predetermined investment path.