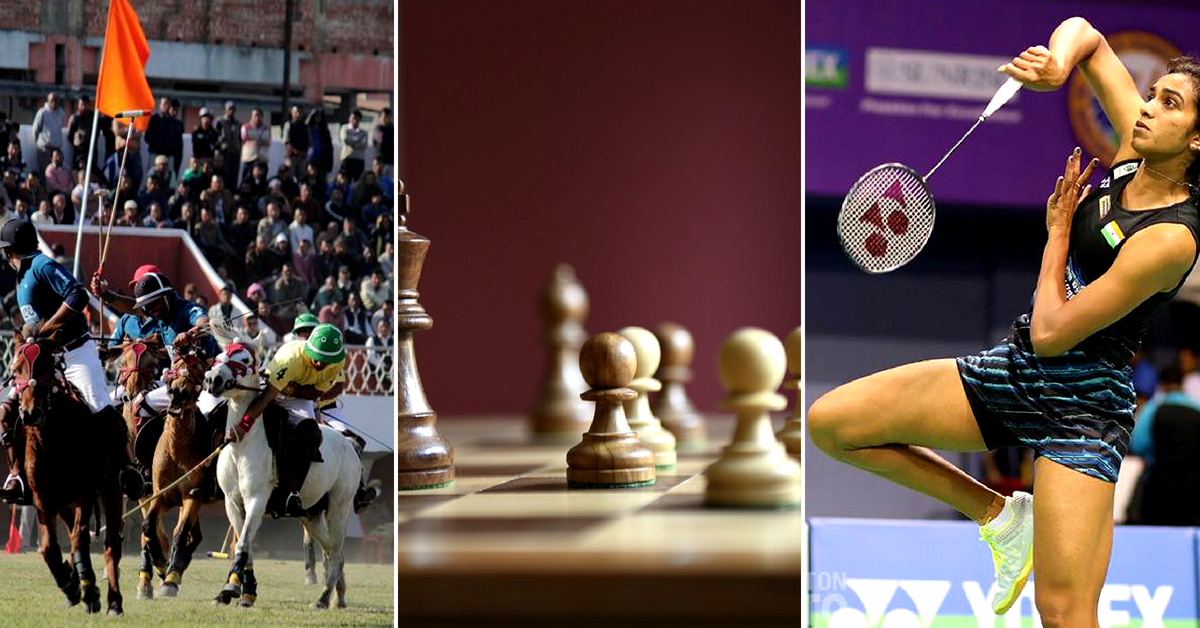 Popular all over the world, these games have their origins in India!

Played all over the world with a lot of passion, these 5 famous games have origins in India!

Today, sports have brought nations closer. Competitions held across the world for various disciples attract large crowds. They have also been a way to instil discipline, team-spirit and other important qualities in a person. And as for the athletes themselves, they’re well-loved and respected all over the world. Subject to how popular their sport is, they become legends and anything they put their name on turns to gold! Remember Michael Jordan and his association with Nike?

Well, these five popular sports are today played all over the world, but they had their origins here in India!

When Chennai’s Rameshbabu Praggnanandhaa became the second youngest chess grandmaster in the world, it felt like a homecoming because this game was invented in India.

The history of chess can be dated back nearly 1,500 years, and the earliest predecessors of the modern game can be traced back to India. Called ‘chaturanga’ which roughly translates into ‘four divisions of the military’, the game was hugely popular in India in the 6th century during the Gupta empire.

Harappan and Mohenjodaro archaeological findings have suggested that chess-like board games flourished during the Indus Valley Civilisation. Yet another theory says that the game was called ‘Ashtapada’, Sanskrit for ‘spider’. Played with dice on an 8×8 checkered board, the game soon shed its gambling and dice aspects thanks to religious objections. Travelling Persians and Arabians took the game outward from ancient India and spread it globally.

India has a total of 37 Grandmasters, the most famous being former World Champion Viswanathan Anand.

Played on horseback between two teams of four players each, who use long flexible mallets to drive a wooden ball down a grass field, between two goal posts, polo is the oldest of the equestrian sports.

Modern polo originated in Manipur. The Silchar Polo Club was founded in 1859, by British military officers and tea planters, after a Lieutenant, Joe Sherer, saw the locals playing the sport, and decided that the British had to learn this game!

Polo is now an international sport and is played everywhere, from America to Australia. In America, the United States Polo Association is the governing body of the sport. In fact, from 1900-1939, polo was even an Olympic sport!

This fast-paced contact team sport gained worldwide fame after it was played at the 1936 Berlin Olympics. Played all over ancient India in different forms, the game became popular in Punjab, as part of their martial traditions.

Today, it is the national sport of Bangladesh as well as the state game of Karnataka, Kerala, Andhra Pradesh, Uttar Pradesh, Bihar, Haryana, Tamil Nadu, Maharashtra, Punjab and Telangana.

The All-India Kabaddi Federation was formed in 1950 and framed some official rules for the game, many of which govern international competitions today. In fact, Japan got its taste of kabaddi in 1979, when Sundar Ram, who toured Japan on behalf of the Asian Amateur Kabaddi Federation for two months, introduced kabaddi there.

The first Asian Kabaddi Championship was held in 1980, and India emerged champion.

This game originated during the British era when they played at the garrison town of Pune. The game was even known at the time as Poona, or Poonah. And the first rules were drawn up in Pune, in 1873.

It was the expatriate Britishers here, that two games, battledore and shuttlecock merged, to give us badminton. The name ‘badminton’ was derived from the Duke of Beaufort’s Badminton House in Gloucestershire.

England, Scotland, Wales, Canada, Denmark, France, Ireland, the Netherlands and New Zealand were the founding members of the International Badminton Federation in 1934, which India joined as an affiliate in 1936.

Over time, India has had her share of male and female badminton champions like Saina Nehwal and Prakash Padukone. Other stalwarts are Aparna Popat, Pullela Gopichand and Chetan Anand.

Well, the game that was named after a city in Maharashtra during its early days has evolved into a global sport, with extremely skilled players from all over the world participating in fast-paced tournaments.

This popular ‘strike-and-pocket’ game of South Asian original, is believed to have originated in India and surrounding areas, with many clubs and cafes holding regular tournaments.

Carrom is your typical family game, and elders and kids have fun on the board. One of the royal palaces in Patiala has a carrom board with a glass surface, and the sport’s popularity was immense–serious state-level tournaments were being held in different states of India, during the early part of the 19th century.

By 1958, India had formed official federations of carrom clubs, sponsoring tournaments and giving out prizes. The year 1988 saw the International Carrom Federation come up in Chennai. The game slowly gained popularity in Europe and the US, where it was introduced by Indians. In fact, the most expensive carrom boards made of high-quality wood in the US have been imported from India!

You may also like:- The Untold but Inspiring Stories of These 8 Indian Sports Heroes Will Make Spectacular Biopics!

As these sports spread worldwide, along with modernity, federations and governing bodies formalised the sports. Today, we might be obsessed with cricket, but it must not be forgotten what we contributed to the world of sport early on!