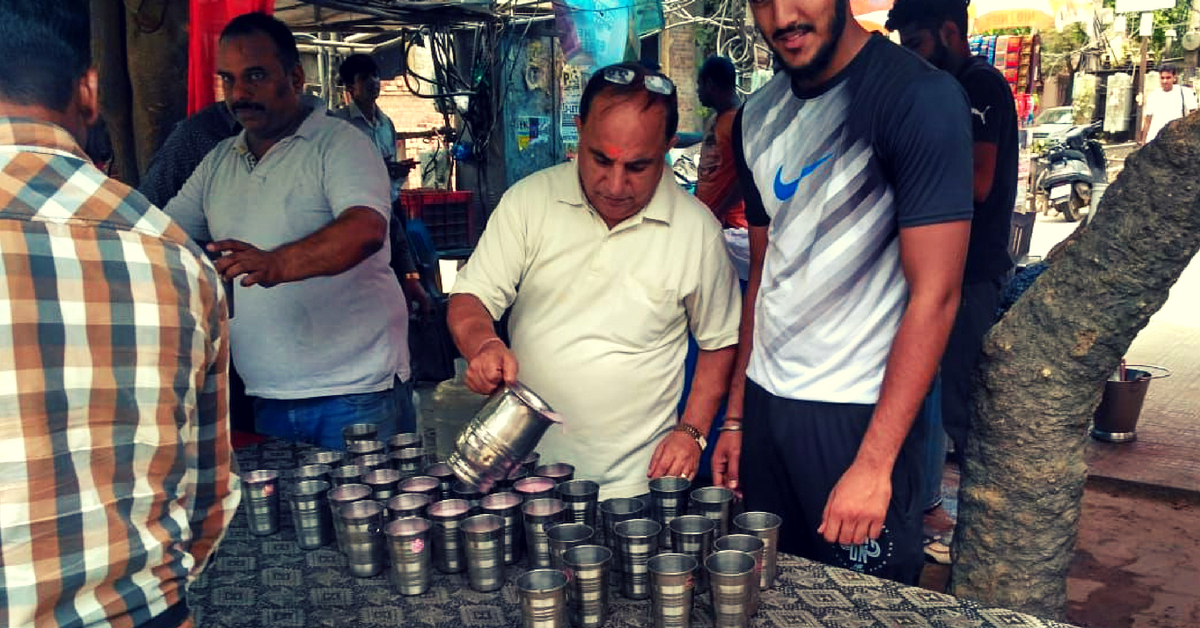 Even as citizens in Maharashtra continue to face severe struggles over a statewide plastic ban, one Gurugram resident is taking conscious efforts to make her city plastic-free in her own small way.

Sameera Satija, a resident of Sector-14 in Gurugram, has been working with several social groups and is a crusader for waste management. And now she has come up with a novel idea.

In a bid to reduce the usage of plastic, the lady who works for the audit department for the Comptroller and Audit General of India has opened a steel crockery bank. This unique bank lends citizens steel utensils for functions and occasions free of cost!

The idea is to help citizens cut down the use of single-use plastic cutlery and avoid adding to the growing mountains of plastic waste in the city.

The idea first came to Satija after she observed good Samaritans at a ‘Chabeel’ (a location organised by devout Sikhs to serve water) serving ‘Meetha Paani’ (cold, sweet water and milk drink) to people during a scorching summer.

And while the effort was selfless, the fact that the group was serving water in disposable glasses bothered her. She found the case to be similar elsewhere too. Most groups organised charity drives distributing food and water for ‘punya’, but in the process landed up generating a lost of waste. This angered her to no end. But she knew that asking people to buy steel cutlery wasn’t realistic, since most wouldn’t want to make that kind of investment.

Besides, she also got in touch with a company which manufactures disposable plastic glasses and plates, she was shocked to know that the process of manufacturing three disposable glasses required one glass water. The information that water was used to produce these plastic glasses and was then served in the same glasses again, not to forget the disposal of which adds to environmental pollution, made her think of alternatives.

That’s how the idea of the steel crockery bank came. Satija shelled Rs 10,000 from her own pocket to start a bank with 100 glasses, 100 plates and 75 newly acquired quarter-plates. In a matter of a few days, she has been able to increase the number to over 400+ steel crockery.

“I started distributing the steel crockery among three such organisations for their water charity drive. They were so impressed with the idea, that they returned the glasses after use and donated 10 more glasses to expand the bank. It was heartwarming,” Sameera told The Better India.

Sameera is urging citizens to replicate similar steel crockery bank models in all sectors. For those who can’t, she urges them to help her expand her steelbank with utensils that could benefit more people.

Many well-wishers have connected with Sameera to contribute monetarily to the cause to augment the bank too.

How to avail of this steel crockery bank?

Sameera has created a Facebook page called Crockery Bank for Everyone to promote the project with the help of her friend, Dr Aarushi.

The next time citizens need these environment-friendly plates and glasses for any occasion – ranging from ‘Chabeels’ to ‘Bhandara’ (community banquet), all they have to do is visit the Facebook page.

Get in touch with them, share your programme date and contact number. You will then receive a call. All you have to go get a written letter for your requirement from your Resident Welfare Association functionary or your ward councillor. If none of this is possible, two members who require the crockery have to submit ID and address proofs.

Once the process is complete, you can avail the crockery. Don’t forget to use wash and return it to them at the end!

She signs of with a final message she says,”Whenever we take up any activity even if it is charity driven, let us also look at how much waste it generates. Disposable plastic cutlery is choking our landfills, adding filth to our roads and killing our water bodies. It doesn’t take much to make a simple environmental-friendly switch. I know I cannot reach everyone who wants to be a part of this change, and so I am urging more and more people to replicate this model in their own societies.”

You can visit their Facebook page, Crockery Bank For Everyone here to avail of the free steel crockery. You can also write to Sameera at simsatija@gmail.com