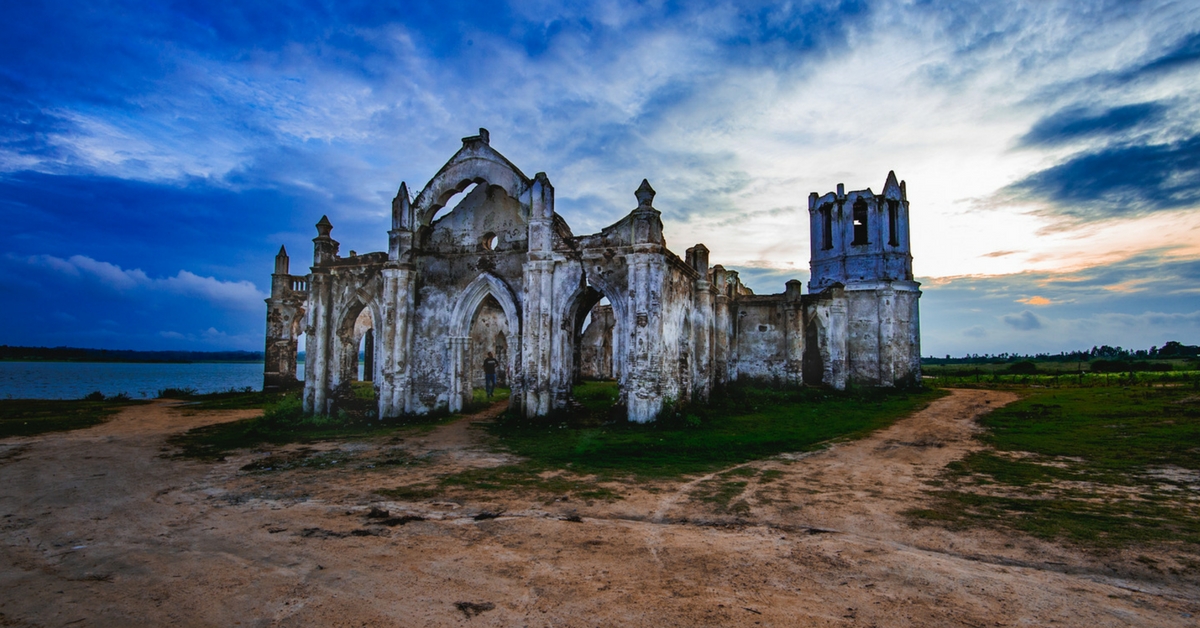 Across India, deep within its villages, lie secrets that you may have never known about. Travel to these mysterious destinations to get a taste of the unknown!

We’ve heard of the mysteries of the Bermuda Triangle, where hundreds of ships that enter, seem to disappear under strange circumstances—but did you know that India is not without its share of mysteries?

Here are 11 places around India which have a mysterious allure!

As per government order, it is prohibited for anyone to enter the fort before sunrise and after sunset. Why? Because rumour has it that the place is haunted, and there has been a history of mysterious events happening at the fort.

Built by Man Singh I, one of the gems of Akbar’s court, the fort is shrouded in myths. One popular story among the locals is that there was once a wizard, who fell in love with the princess of Bhangarh. When she came to the market to buy ittar (perfume), he switched it with a love potion.

The princess sensed a trap and threw the bottle onto a boulder, which rolled down and crushed the wizard. Before he died, he cursed the palace, declaring that no one would be able to live there. It was after this that the fort came under attack, and all the members inside were killed, including the princess.

Another story is that a holy man by the name of Bala Balau Nath dictated that no house within the precincts of the fort should be made taller than his house. If the shadow of another building fell on his home, the entire fort town would be destroyed.

Lepakshi is one of the architectural wonders of India. With murals on the walls and inscriptions on the pillars, the temple filled with its own mysterious secrets. Located within the temple, is a hanging pillar. It does not touch the ground, and looks as though it is floating!

People come from far and wide, just to pass objects under the pillar; it is considered good luck. Lepakshi itself holds significance in Hindu mythology. It is said that when the bird Jatayu fell in battle, Rama found him at this spot and said, “Le Pakshi”, meaning “Arise, bird.”

The Chandipur beach in Orissa has been nicknamed the “hide and seek” beach for a good reason. The water at this beach recedes by 5 kilometres every day, in between the high tide and the low tide. This is a rare phenomenon!

The sea will literally disappear before your eyes, exposing a melting pot of different species. One can even walk on the waterbed that is left behind, giving the illusion of walking on water!

Jatinga is a village in Assam with lush green hills, beautiful scenery, and a cool climate—but that’s not why it is famous. This little Assamese village is home to one of India’s greatest mysteries.

During the monsoon season, just after sunset, migratory birds commit mass suicide. They drop from the sky and plummet to their deaths—a phenomenon that till date, doesn’t have a completely comprehensive explanation.

The locals believed that the birds were attacked by mysterious evil spirits, while scientists believe that the birds become disoriented by the monsoon fog. Others say the lights in the village attract the birds so much that they fly head-on, crashing into the ground below.

Even if this were true, it doesn’t explain why the birds fly at night or choose to get stuck in the same location every year.

This village in Kerala is located in the Malappuram district in Kerala. At first glance, it is just a normal village with people going about their daily work. However, upon closer glance you’ll start seeing double—the village has a very high population of twins! The estimated population is around 2000, and there are about 200 pairs of twins!

Scientists are not yet sure of how this phenomenon occurred, though some believe that the water has special chemical properties that make a person more likely to give birth to twins.

A famous legend which surrounds Kuldhara is that the villagers who lived there disappeared overnight! Today, the abandoned village in Rajasthan still stands, though it is in ruins.

The village was once occupied by Paliwal Brahmins and thrived as a place of agriculture. However, some believe that Kuldhara was abandoned due to the lack of water and the excessive taxes imposed by a certain diwan, named Salim Singh.

Another version of what happened in Kuldhara is that the evil Salim Singh set his eyes on a village girl and sent his guards to force the villagers to hand her over. The villagers asked the guards to return the next day and cleared the village overnight. Upon leaving, the Brahmins cast a curse so that no other could inhibit the land.

Since then, there have been rumours of unusual activity, mysterious voices, and strange shadows that can be observed in the abandoned village—and interestingly enough, no one has tried to reinhabit the place.

You may also like: 14 Fascinating and Perplexing Unsolved Mysteries of Indian History

While driving, we were taught to always put on the handbrake, so that the car wouldn’t go careening down a slope. However, at the Magnetic Hill in Ladakh, slipping down a slope is the last of your worries—because here, cars are pulled upwards!

As the superstitions go, some of the locals believe that the road was once connected to heaven. Those who were deemed worthy were immediately pulled onto the path. Another more scientifically based theory is that the magnetic force within the hill pulls cars towards it.

Of course, others say that it is the product of an optical illusion which makes a downslope seem like an upslope. Either way, the beauty of this phenomenon cannot be denied.

This is one of the most open communities in India—literally! The entire village has absolutely no doors, only door frames and all their possessions are kept open. Even the local bank is kept open, although assets are placed in lockers. Despite this, the village has a very low crime rate.

The villagers believe that the area is under the protection of Lord Shani, who punishes anyone who tries to steal. In the past, those who have stolen have had terrible things happen to them, from vomiting blood to incurring mysterious diseases.

Some villagers in the past have tried to change their ways by installing doors. However, it is met with resistance by others—who believe that Lord Shani is enough to protect them.

The Shettihalli Rosary Church is also known as the Drowning Church. Built in the 1800s by French missionaries, the church was abandoned when a reservoir was constructed in the area.

Since then, during the monsoon season, the church is partially submerged in water! Today, it is frequented by a few who dare to travel off the beaten track. The church itself is modelled after Gothic architecture and makes for a mysterious atmosphere.

Snakes find a refuge in Shetpal, a small village with a population of a little more than 2000 people. Every home has a special section built, just in case a snake should come by seeking refuge. They call this the “Devasthan.”

The snakes themselves move about without fear and are revered by the residents. Children play with cobras, and yet, till date, there has been no case of snake bites! The villagers believe that it is because both man and snake carry mutual respect for each other.

The Roopkund lake is a glacial lake located high up in the mountains of Uttarakhand. Today, it is a popular trekking destination. While the lake itself is 2 metres deep and is covered in ice for most of the year when the snow melts remnants of human skeletons can be seen.

A local legend goes that Raja Jasdhaval, the king of Kanauj, along with his pregnant wife, servants, and a dance troupe, were on a pilgrimage to the Nanda Devi shrine.

The travelling party, which amounted to more than 300 people, got stuck in a terrible hailstorm, and all perished near Roopkund lake. It is their bones that are in the lake today.