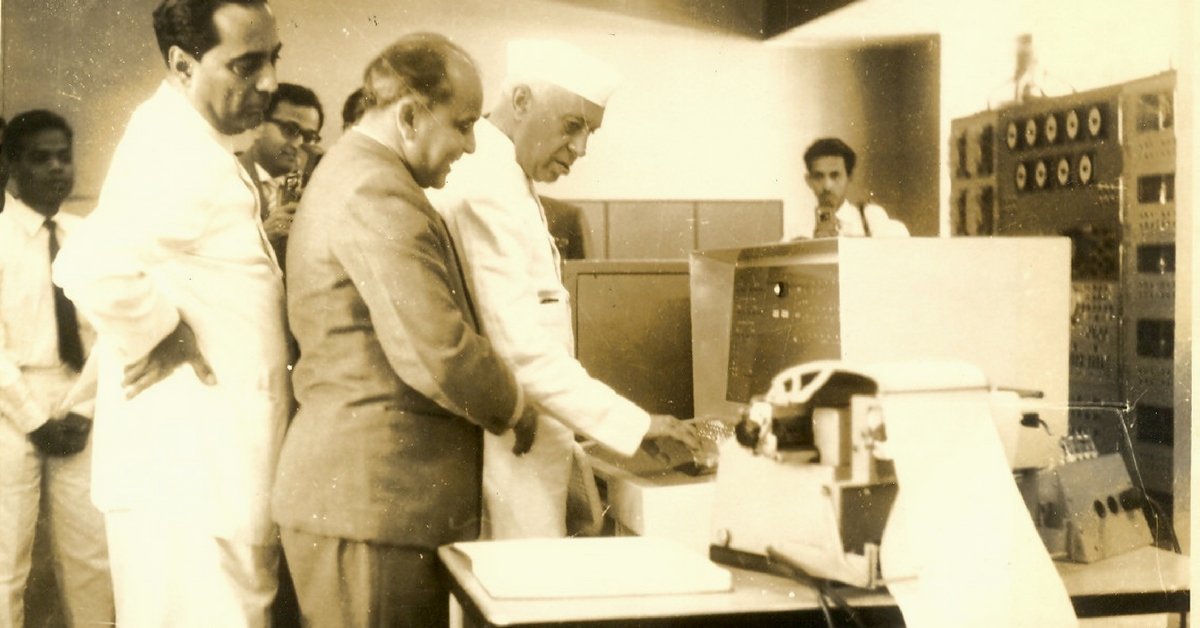 Did you know that the credit for kick-starting India’s computer revolution goes to a epic clash between two scientific titans? Here’s the interesting story!

Over the years, computers have come to play a significant role not just in the lives of ordinary Indians but also in their work. The last few decades especially have seen rapid advancements in the field of computer technology in India. For many Indians, this is a welcome consequence of the LPG (Liberalization Privatization Globalization) reforms unleashed by the government in 1991.

However, while it was certainly an important turning point, the year 1991 was not when India’s computer revolution came into existence. The story begins in the tumultuous years just before India’s Independence.

A statistician who would later go on to be one of the main architects of India’s planning regime, Prasanta Chandra Mahalanobis, had been asked by colonial administrators to conduct estimates of the paddy crop in Bengal in the aftermath of the famine. It was while doing this that he felt the need for computing machines and decided to try developing them locally.

With this thought at the back of his mind, Mahalanobis founded the Indian Statistical Institute (ISI) in Calcutta in 1932 and introduced mechanical desk calculators for the first time. In 1943, he also set up the Indian Calculating Machine and Scientific Instrument Research Society to explore the fabrication of such devices locally.

However, it was only after India got its hard-won independence that he got the opportunity to work towards developing indigenous computers. The development of India’s scientific capabilities was a key interest of then-Prime Minister Jawaharlal Nehru and he gave the responsibility of spearheading this project to two of his most trusted scientist-aides — Mahalanobis and Homi Jehangir Bhabha (who, interestingly, shared a fierce professional rivalry!).

Since acquiring computing power and capability necessary was integral to the success of this effort, Mahalanobis and Bhabha began a race to kickstart India’s computer revolution. Both of them decided to work towards acquiring contemporary computers, build national institutions that would specialise in this technology, and, most importantly, develop indigenous capability.

With the specific aim of developing an analog computer to support the work done at ISI, Mahalanobis set up an Electronic Computer Lab and hired two talented graduates for the purpose- Samarendra Kumar Mitra and Soumyendra Mohan Bose.

While the task may sound easy, back then, it definitely wasn’t. Thanks to the absence of locally-made computer components in India and a scarcity of foreign exchange (along with a tedious bureaucratic process) to import components, finding ready-made parts for the computer was near impossible.

So the enterprising duo scoured the junkyards and war surplus depots to dig up scrap material that they then re-purposed into computer components in their workshop. For instance, in the absence of magnetic tapes or floppy disks, data was punched into cards made of stiff paper!

Their ingenuity and tireless efforts bore fruit when India finally got its first indigenous analog computer (that could solve linear equations with 10 Variables and related problems) in 1953.

By then, Bhabha had already founded the Electronics Committee that would go on to lay the blueprint for India’s computer development in 1970s and spawn new institutions like the Department of Electronics. Thus began India’s computer revolution. Interestingly, both Mahalanobis and Bhabha bonded well with Western scientists and used this network to forge closer ties with the global computer community.

A few years later, a new race began between these two scientific titans — the race to build India’s first indigenously-developed digital computer. Under Mahalanobis’s guidance, ISI collaborated with Jadavpur University to work towards the same. At the same time, Bhabha was blazing his own trail at Tata Insititute of Fundamental Research (set up by JRD Tata in 1945 after Bhabha wrote to the Tata Trust requesting financial assistance to set up a scientific research institute).

While Mahalanobis had won the previous race, this one was aced by Bhabha when his team built a full-scale digital computer in 1959. Commissioned for routine work in early 1960, the machine was formally christened TIFR Automatic Calculator (TIFRAC) by PM Nehru in 1962.

Recalling the excitement of the TIFR team when the first program was run on TIFRAC, PVS Rao (a member of the pioneering team) narrates in the opening essay of the book, Homi Bhabha and the Computer Revolution (edited by RK Shyamasundar and MA Pai),

“It was a small machine language program cumulatively adding one number to another; it looped a number of times and stopped after a specified number of cycles. To the design team, the first Indian computer running a ‘stored program’ was as much a milestone as the first Indian reactor sustaining a chain reaction of nuclear fission!”

Having built India’s first generation analog and digital computers at their respective institutions, both Mahalanobis and Bhabha realized the need for more powerful, state-of the-art, computing machines to boost the fledgling scientific research taking place in the country. This requirement formed the basis for a third race between the two — a battle to win the tag of National Computer Centre for their respective institutes!

While simultaneously expanding the computing activity being carried out in their organisations, both Mahalanobis and Bhabha devoted their efforts towards importing powerful contemporary computers.

Since it was difficult for the Indian government to spare so much foreign exchange for one piece of computing equipment, they had to convince foreign governments and institutions to help them fulfill this target.

After a fortuitous turn of events, it was Bhabha who finally won this battle and took the lead in India’s electronics development policy. The head of TIFR had run into IBM’s Director of Research (ER Piore) aboard a flight to Zurich and mentioned his plan of acquiring a cutting edge computer for atomic energy research in India. Impressed by Bhabha’s vision and articulate arguments, Piore agreed to help.

This was the genesis of a long and fruitful association between a state-run Indian research project and an American computer biggie that would go on to pave the way for not just India’s atomic energy research, but also for its celebrated IT revolution.

As we come to the end of this fascinating story, here’s some interesting trivia about the world’s earliest analog computer.

In 1902, Greek archaeologist Valerious Stais was working at the National Archaeological Museum in Athens when he made a momentous discovery. Embedded in a piece of rock recovered from the Antikythera wreck (a shipwreck off the Greek island of Antikythera), he noticed a corroded yet perceivable gear wheel.

Nicknamed the Antikythera mechanism, the ancient mechanical device was designed to calculate astronomical positions. Today, the primitive tool is believed to be the mankind’s oldest analog computer!