In Mumbai’s Most Backward Area, 300 Differently-Abled Kids Are Getting a New Life 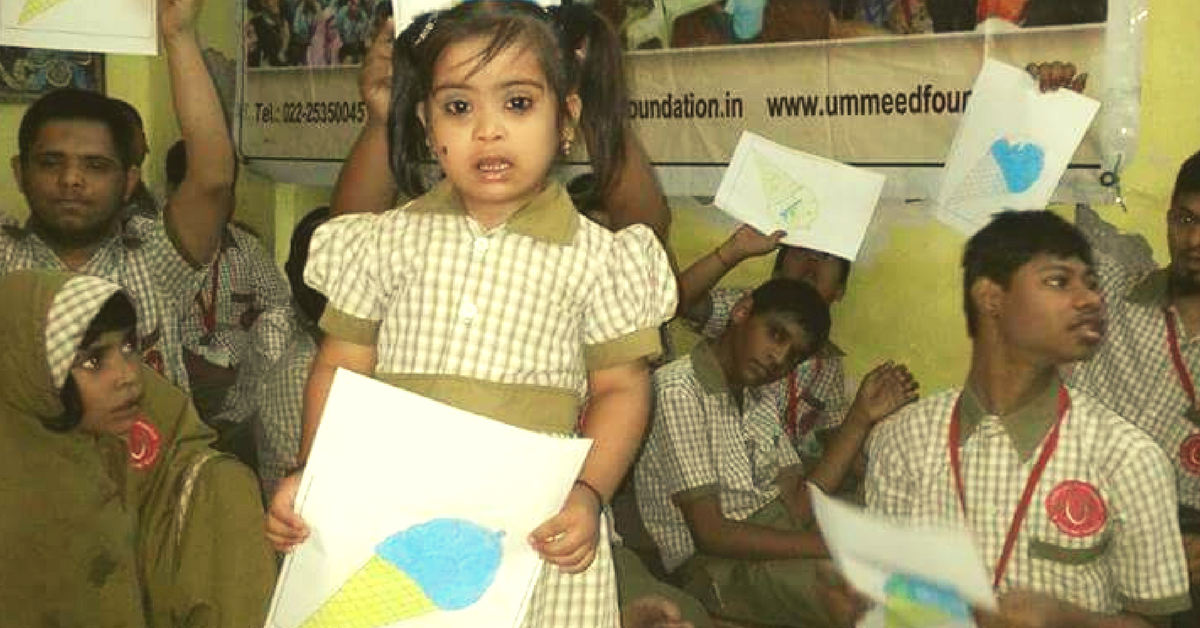 Recently, the kids delivered an order of 600 flowers to the Hotel Grand Hyatt in Mumbai.

In a 2011 report, the World Health Organisation (WHO) estimated that 15.3% of the world’s population deals with some kind of disability.

The 2011 census numbered India’s disabled at 2.21% of the population. 28.2% of children with disabilities remain out of school, according to the 2014 National Sample Survey of Estimation of Out-of-School Children between six years and 13 years in India.

While these are just statistics, hardware engineer Parvez MA Farid experienced these numbers first-hand while growing up in Mumbai’s Mumbra, when the population of the area suddenly spiked.

And what a spike it was.

The swollen population brought with it decreased sanitation and an increase in the risk of diseases. This danger hit pregnant mothers especially hard, often causing disabilities in their unborn babies.

Once again, Parvez, who was running a computer training technical institute called Hindustan Academy, discovered these facts first-hand. His nephew, Salman, was born with a mental disorder.

The quest to get his nephew educated is what set Parvez on the path of ‘Ummeed’, which means hope. Parvez had visited every school in Mumbai to get a seat for his nephew. However, none of them was willing to take the child.

“For almost eight years we tried to send Salman to a school, without any success. There’s no school for differently-abled children in Mumbra. There’s only one government school in Thane, and the rest are private schools where there is a waiting period of almost three years,” says Parvez.

It is not like the government has not tried to address this issue. But once again it was a case of misplaced priorities and shoddy implementation

“Since 2010, as per the government’s Sarv Shiksha Abhiyan scheme, regular schools need to accommodate these students. So, they have stopped granting special schools. However, practically, normal schools avoid taking them. So, where would they go,” says Parvez.

After trying in as many schools as they could, Parvez finally decided to teach Salman himself in 2010 – when the boy was 14. But why not help many others like Salman, thought Parvez.

Thus, he laid the foundation for Ummeed by renting a small room in Mumbra. He started surveying every house in the area to find differently-abled children who were refused admission by schools. This was the most challenging part of his mission, as people usually refused to believe that their children were not ‘normal’.

“The denial was more in the case of girls. Parents wouldn’t accept that they had a disability – especially in the case of mental disabilities. These kids weren’t allowed to come out of their houses either, to hide this fact. I have even seen parents hiding this during the census, hence, I believe the disabled population might be more than the official number,” says Parvez.

After persuading parents for months, Parvez finally got some students. For this, he had to first educate their parents about government schemes available for the kids.

There are numerous schemes by the government for the disabled. However, according to Parvez, these schemes do not reach the intended. As Parvez says, most residents in his locality stay in slums of rented huts – they have no residential proof. Moreover, for every benefit, the disabled have to visit different government offices where there are no sitting arrangements or facilities for them.

“An IQ certificate is given only once a year to everyone in a day. How can 3% of India’s population be given the certificate in just one day?” Parvez questions.

Parvez arranged certificates, passes and all benefits for these children, along with giving them medical and intellectual help. Apart from helping them get a disability certificate, tests, passes, benefits and opening bank accounts, Parvez also took special care of the health and education of the children.

Special doctors, teachers and physiotherapists were appointed to look after his students. Friends and well-wishers soon pitched in to help and people were more than willing to send their kids to Ummeed.

With more support from the Khidmat Foundation, Parvez moved to a 1000 square-feet area in Mumbra to accommodate more children. Over the past two years, students of the Ummeed foundation have appeared for the class 10 exams. “13 kids passed class 10 last year. This year too, 13 kids are in class 10,” he told The Better India.

Vocational training to make flower arrangements, greeting cards, diyas and crafts are also given to the students. Recently, the kids delivered an order of 600 flowers to the Hotel Grand Hyatt in Mumbai. The classes are run in two sessions. The morning session is for the mentally challenged kids, while the afternoon session takes care of children with multiple disabilities.

Disabled people are aided in all ways possible. Ummeed Foundation provides them with medical fees, medicines, medical equipment like callipers, wheelchairs, tricycles, hearing machines and surgical costs among others.

Counseling and guidance are strong and vital helping tools for these students, according to Parvez. Many of his students are just slow learners who have dropped out from school because our education system doesn’t accept kids who score low marks. He points out that these kids are good in other activities and just need some attention and a better approach by the system.

“Every child is special. Some might need less help and some more. Our society, system and public spaces are developed according to the 97% and ignore the 3%, who are a crucial part of our society. We don’t care about them because they don’t walk on roads, they can’t roam around in malls, or they can’t be a part of normal schools. However, a slightly different approach can help them contribute great things to society,” says Parvez.

Salman, because of whom Parvez started his journey, is a well-learnt child now. He has cleared three exams in class 10 and is appearing for the remaining three this year.