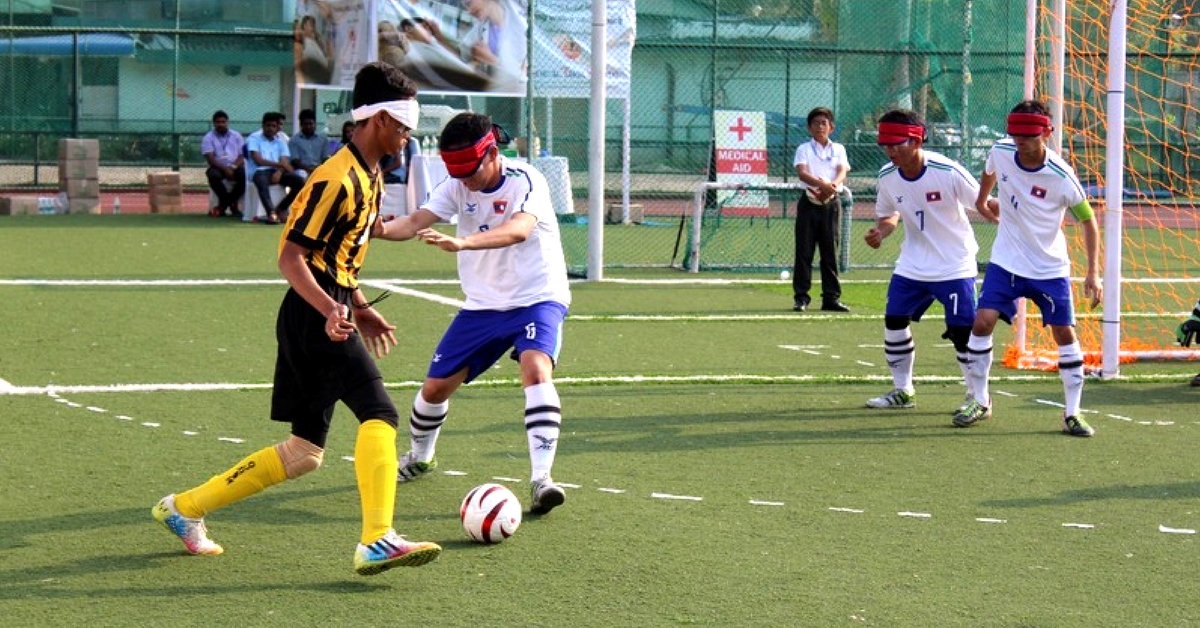 The project has been undertaken by the Indian Blind Federation (IBFF) in collaboration with the Society for Rehabilitation of Visually Challenged (SRVC).

Did you know that Blind Football existed?

And that India has its own team of visually impaired footballers that is part of the top-30 global rankings?

Begun as a playground game in special schools for visually impaired children, Blind Football is currently a Paralympic sport, and every year a World Championship is organized by the International Blind Sports Association (IBSA).

So how is blind football played?

To be clear, not all of the players are completely blind. Most of them are visually impaired to various degrees. But to keep things fair – all players, except the goalkeeper, are blindfolded. The football is also modified with a bell, and it makes a jingling sound when in motion. Hence it is also sometimes known as the bell ball.

The great news is that India will soon have its first Blind Football Academy in Kochi that will not just provide full-time football, but also vocational skill training as well.

The project has been undertaken by the Indian Blind Federation (IBFF) in collaboration with the Society for Rehabilitation of Visually Challenged (SRVC).

Ten visually impaired footballers from across the country have already been selected by IBFF who will be moving to the city. The football academy will also provide free accommodation for the sportsmen, and Kadavanthara’s Jogo Football Arena has been selected as the main practice ground.

You may also like: India’s Blind Cricket Team Has Participated in 4 World Cups over 27 Years. And It Recently Won Too.

“When they end their careers as footballers these players should be able to make a living for themselves and vocational skills will come in handy,” Sunil J Mathew, sporting director at IBFF, who is spearheading the blind football project, told the Times of India.

The academy’s task force includes two permanent training staff and one physiotherapist. Also, part of the support staff will be a gym trainer, a yoga trainer and a nutritionist.

The academy is currently getting all ready for its inauguration, which is slated for September 15. Reportedly, Ulrich Pfisterer, who is the chairman of IBSA and the coach of the German blind football teach, is expected to be part of the event.

Though the Indian team was instated only in 2015, it has managed to grab a 23rd spot in the global rankings within a short span of two years.

Amidst the ten footballers who have been selected for the national team is Gabriel Nongrum—all the way from Shillong, Meghalaya. The 23-year-old footballer who lost his eyesight when he was two years old, had never played the game until last year.

However, Gabriel was quick to learn and soon showcased the makings of an exceptional striker, leading him straight to the national team in less than a year.

One among the nine children of a farmer in Meghalaya, Gabriel’s dream is to help the Indian team climb up to the top spot.

You may also like: This Political Science Professor Has Led the Indian Blind Cricket Team to Three World Cup Wins!

“Academies like the one in Kochi will help our national team become even better and hence more people will learn about it. Today most people are surprised that such a sport exists. They ask a lot of questions like how do the blind people play football so well and how they spot the ball,” he said.

IBFF also organises many activities and awareness games across the country. If you know someone who is visually impaired and these activities will benefit the, you can check out more details here.