In our busy lives where our abilities are taken for granted, we forget that living along with us are challenged people who have special needs. Who could better understand the

In our busy lives where our abilities are taken for granted, we forget that living along with us are challenged people who have special needs. Who could better understand the needs of the visually challenged than someone who has suffered it herself? Madhu Singhal is visually impaired by birth. Born into an upper middle class family in Haryana, Madhu had the affluence to lead a comfortable life. But she chose not to be laid back and wanted to do something on her own.

After completing her MA in Hindustani Classical Vocal Music, Madhu came down to Bangalore to undergo specialized training in communication and counseling. To her surprise and much difficulty, she found that there was very little support for her learning needs. In the North, audio recordings of text books were made available for students like her, but here in Bangalore Madhu couldn’t find any such help. Fighting this difficulty she completed her studies and got out only to find that it was extremely difficult for her to get a job. This is when Madhu decided that no one else should suffer what she suffered. And Mitra Jyothi was conceived. 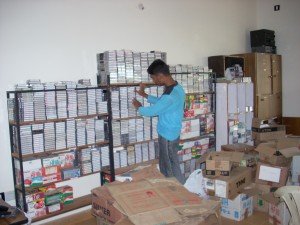 and making them independent enough to take charge of their lives. The organization’s most popular initiative is its Talking Book Library. Text books and books for general reading are given a voice by volunteers, and cassettes and CDs are recorded for circulation. Over 22,000 cassettes of more than 2000 books have been recorded till date. Mitra Jyothi set up its own recording studio to provide this service professionally. Notably, Mitra Jyothi’s effort in this front was the first of its kind in Karnataka and over 5000 people have benefited from the library.

The organization is also extensively involved in Braille transcription and providing computer education to the visually impaired. Mitra Jyothi runs a full-fledged job placement cell for its members, a service that has helped its members find suitable jobs in corporates and manufacturing units. Another admirable service is that the organization runs special courses for women to impart independent living skills.

Mitra Jyothi has been serving the needs of the visually challenged for over two decades now. It has extended its services to Kerala, Andhra and Tamil Nadu. Madhu Singhal has nurtured the organization with her selfless commitment that grew beyond her impairments.  Madhu lives independent, travels abroad on her own, spearheads an organization and chairs important positions in various social service organizations – a true role model. What she has achieved can be made possible for more visually challenged people. Help spread the cause.