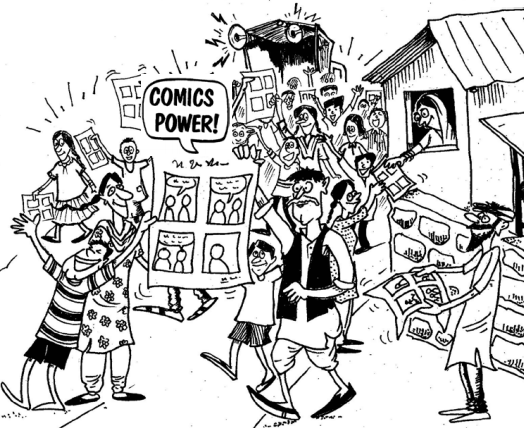 We have all read comics when we were young. Many of us continue to read them due to their fascinating nature of conveying stories very easily.

But comics need not necessarily confine to the comedy genre. Can they be used to communicate an issue, a cause or a fact? World Comics India, led by Sharad Sharma, is doing exactly that – using the power of comics to bring about a social change!

World Comics India is a collective of cartoonists, media persons and grassroots activists. This organization makes use of comics to serve as a communication tool and as a mode of self-expression in remote areas of not only India, but many countries in South Asia.

Sharad Sharma, who leads World Comics India, is a cartoonist from Jaipur and has initiated numerous workshops where cartoons and comics are used to spread awareness. A novel idea indeed, considering that comics can easily cut across language barriers!

One of their campaigns was the Girl Child Right Campaign which aimed to address the issue of female infanticide in the region of Western Rajasthan. Here, they trained children and adults in comics making. These trained people in turn created over 300 comics focused on the girl child’s rights. World Comics India then conducted a road-based tour with all this material which was distributed to various villagers and local leaders. You can view some of their campaigns here: Grassroot Comics

Similarly, they had also initiated a campaign against corporal punishment in Uttar Pradesh. Students of a school in Maharajganj used comics to spread awareness amongst teachers that punishment by beating is not really the right way to discipline children. Details of their campaigns in UP available here: Uttar Pradesh campaigns.

Their website is comprehensive with a lot of material available for people and organizations to make use of. For instance, the entire manual on how to go about creating these comics is available in both English and Hindi (both files are about 2 MB each).

If interested, you can download a series of videos available on their website which showcases how the various campaigns were initiated and also on how World Comics India trains people in the art of comics making! Click here to view and download all resources related to World Comics India, including a book written by Sharad Sharma and Leif Packalen titled “Grassroots Comics – A Development Communication Tool”.

Pointer to WCI provided by Sunandini Basu of Inktales