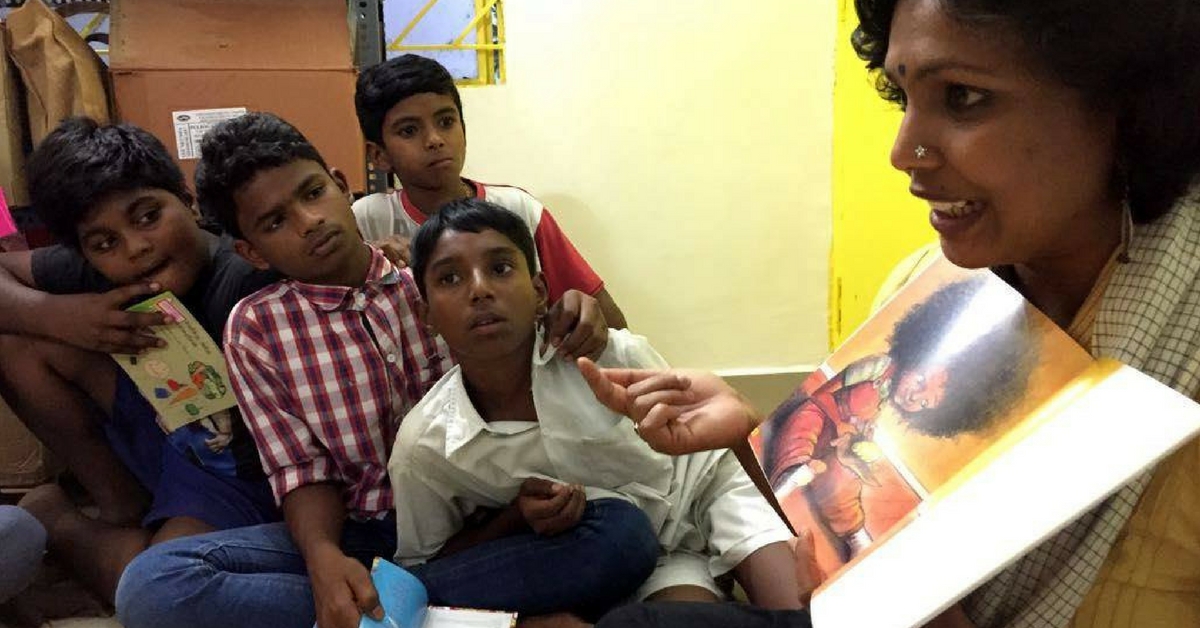 Lakshmi Karunakaran, with the volunteers, has been conducting reading sessions with the children of about 200 families living in a slum.

An empty room above an old-age home in Banashankari, Bengaluru, comes alive every week. With stories that give wings to the imagination of children of ragpickers, residing in shanties close by. Dozens of children run up and down stairs of the community library set up by Hasirudala.

Hasiru Dala is a Bengaluru-based non-profit organisation that works for the welfare of the community of wastepickers.

Named ‘Buguri,’ meaning ‘spinning top’ in Kannada, this community library creates a space for children of wastepickers to spin thoughts and ideas, learn and have fun too.

Speaking to The Hindu, Nalini Shekhar, co-founder of Hasiru Dala, says, “They are all first generation learners. Even those who go to school do not have reading levels equal to other kids their age.Unless you make learning interesting and relevant, it is tough for them to show interest.”

The community library took shape in late 2016, when the organisation was trying to find a place and collect books. Spearheaded by Lakshmi Karunakaran, accessibility was a high-priority for them. The idea was to help children walk to the library by themselves.

Getting children was not a daunting task. Their first visitor, Aravind, a 4-year-old, arrived while the repair work was going on. The blank white walls became colorful canvases when several children, guided by artists and volunteers, painted trees, toys, and giraffes.

“We didn’t even get an opportunity to formally start. After the painting event, we told the children they had to give us some time to set things up. And next day , thirty kids landed up, asking for books,” says Lakshmi.

Lakshmi Karunakaran, with the volunteers, has been conducting reading sessions with the children of about 200 families living in a slum. The kids age between six and 16, and are divided into two groups. From Wednesday to Saturday, children diligently engage in reading and storytelling, and on Sundays they don their Picasso caps, as the space turns into an art activity centre. They learn painting, drawing, and even experiment in theatre and beatboxing.

Today Buguri community library has over 2,000 books – in Kannada, Tamil, Hindi and English – raised from donors from across the world, including Goobe’s, the bookstore on Church Street, and publishers such as Tulika Books and Pratham books etc.

The road to social change is never easy. One of the major roadblocks the organisation faced was many children couldn’t read because 80% in the younger group, while others were dropouts. Lakshmi shared in an interview with the Bangalore Mirror that they are still working out ways to tackle the issue and might introduce a short-term reading fluency programme. But one of the innovative solutions they have come up with is becoming visual readers. This includes read-aloud sessions and storytelling and discussion. They help the children personalise it to the conflict in their lives, and ask them to react in those situations.

You may also like:These Kids Built a Library for Govt School Children From Scratch to Spread Love & Learning

Learning has been a two-way street for both the volunteers as well as the kids. Water is a major issue for the community. On Sunday morning, the entire family is roped in to fill up buckets. So, the attendance at 10am on Sunday sessions dwindles. Giving important lessons in sanitation and personal hygiene by showering everyday become difficult when the kids have never lived with a running tap.

The volunteers help children understand values by personally guiding them.

“When a few kids misbehaved and tore up some books, for instance, they expected to be beaten up. Instead, they were kindly asked why they behaved the way they did. We took a democratic vote and decided to cancel the membership of anyone who breaches the library’s rule of love towards each other and the books. That way, they learn to respect rules,” Karunakaran told Bangalore Mirror.

The last months have seen a steady change, they clean up before coming to the library, comb their hair too. Older kids who speak Hindi, now translate for volunteers, who don’t speak Kannada and Tamil. The spinning of tales goes on, in the bright painted, 200 sq-ft room. Tiny as it may seem, it’s a world of their own.

Connect to them here.