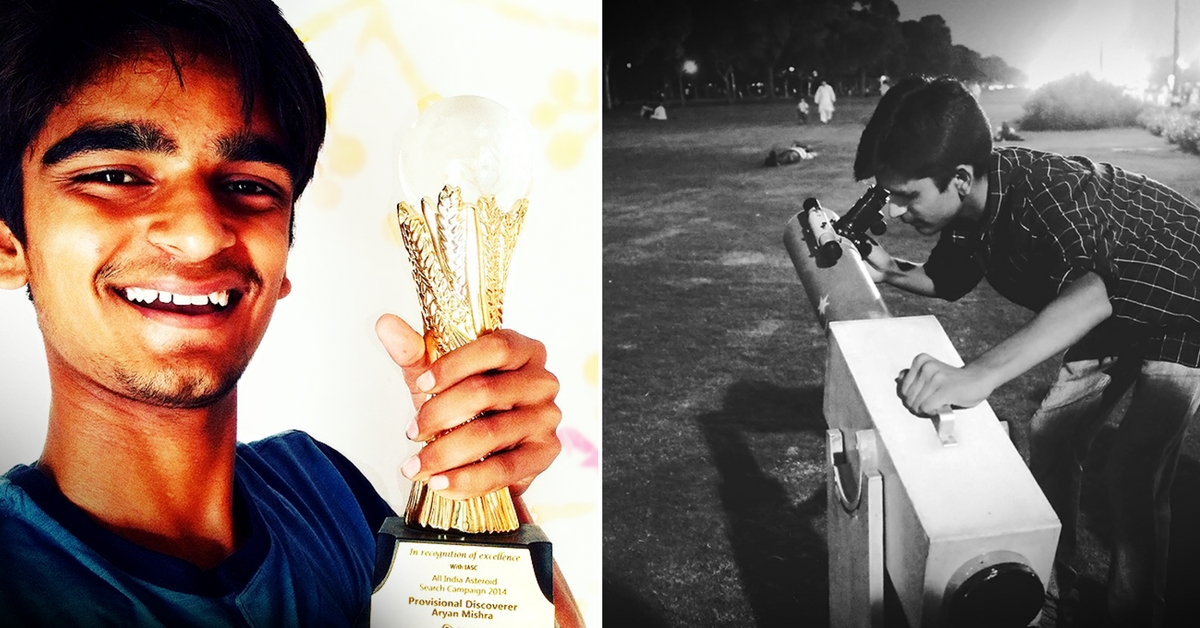 Aryan Mishra, a 17-year-old astronomer, has lofty ambitions of studying the heavens, and encouraging more young minds like him interested in the cosmos.

Aryan Mishra is a 17-year-old astronomer, teen prodigy, son of a newspaper seller, and student from New Delhi. He has managed to achieve a lot at an extremely young age, and his next goal is to attend the Space Camp in Huntsville, Alabama.

To say that he is not a run-of-the-mill boy would be an understatement! Aryan has been credited with finding a near-Earth asteroid when he was 14 through a nationwide search. His discovery will be catalogued in the Official Minor Body Catalogue in Paris.

Some beginnings are harder than others, and Aryan bought his first telescope by skipping canteen meals and walking to school when he was just 11. His father is a newspaper vendor, and Aryan too wakes up at 4 AM every day to help him before he attends school.

From being able to give lectures alongside former NASA Astronaut Nicole Stott (the first human to paint in space) to having his idol Rakesh Sharma write a message to him, Aryan is not one to shy away from taking his goals forward.

Aryan has taken it upon himself to make sure that he spreads his love for the cosmos and its discovery. He makes sure he holds Skype sessions and classes to connect with and teach students all over the world! From Jharkhand to Israel, his audience is wide, and truly global. His passion for teaching as many students as he can seems to come from his own struggles. A lot of his own friends and classmates ridiculed his dreams and called him “psycho”.

He does not want anyone to feel “left out” for wanting to explore the unknown, and for harbouring a dream bigger than themselves.

This summer, Aryan is hoping for an experience he is extremely excited about. He wants to go for a Space Camp in Huntsville, Alabama. The background he comes from is humble, but his dreams are on top of the world – quite literally so!

While he has managed to scrape together funds for a one-way ticket and his camp fees, he is falling short of ₹80,000 to buy his ticket to come back to India. To make sure he manages to go, he is crowdfunding the amount for the return ticket on Wishberry.

From being trained on an actual 1/6th-Gravity Chair and Multi-Axis Trainer to being taught how to build a model rocket, Aryan will also get the chance to learn how to fly aircraft simulators. He will be eligible to earn one credit hour of freshman-level general science from the University of Alabama in Huntsville too. This will give him much-needed assistance in his future scholarship applications, for further internships/education.

Help Aryan go to Space Camp and achieve his dream of studying the stars by contributing to his crowdfunding campaign here.