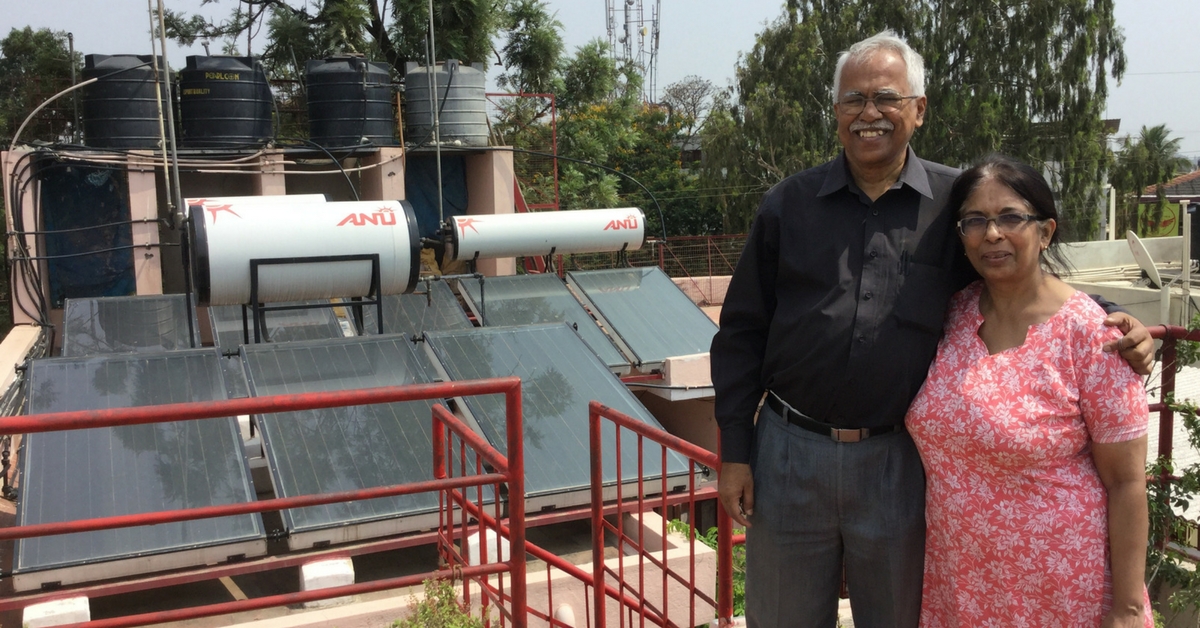 “I have always been aware of the problem of water scarcity,” says Vinodkumar Saxena sitting in the living room of his home in Bengaluru’s Koramangala neighbourhood. An import-export consultant, he was born and grew up in Pune and moved here 25 years ago. His wife Arti has lived here since the ’70s, and together the couple has witnessed the Garden City undergo a drastic change. Keen on living sustainably, Vinodkumar and Arti are turning their home into a green building, one step at a time.

Vinodkumar’s biggest achievement has been to set up a system to reuse all the greywater generated in the Saxena residence.

Even when they built their house in 2006, the duo wanted to make sure that they made their living place as eco-friendly as possible. “We were segregating our waste for years, long before any BBMP rule,” says Arti. For Vinodkumar, the large quantities of water that drained out of homes in the form of greywater was a matter of concern and he decided to build his own version of a greywater recycling unit in his home.

He began with consulting water experts and NGOs that he had come across in newspapers, but could not find a sustainable solution. “They suggested methods and ideas that required too much space, and could not give me any practical suggestions,” he says. Undeterred, he began to think of simpler means to implement it himself. The answer came in the form of plumbing.

He says, “I connected all the bath water and kitchen sinks into an underground tank, with an open tank submersible pump made from stainless steel. In most homes, the pipes from the kitchens, bathrooms and toilets are the same. But I have separate tanks for both. All the bath and kitchen water is pumped into an overhead tank for greywater, which in turn is connected to all the flush toilets in the building.”

The flush toilets are connected to the main outlet pipe of the house, which leads directly to the sewage line. While the water from flush toilets — known as blackwater — is deemed unfit for use, greywater contains far lesser contaminants.

To clear the water of any soap sediments, micro organisms and bad smell, the couple adds small amounts of alum and bleach. The greywater that is pumped back into the toilets thus, has no visible dirt or odour.

Despite the lack of any technical expertise, Vinodkumar conceptualised the system on simple plumbing measures, which anyone can implement in their homes.

“I am not an engineer, and I don’t have any diagrams to show what I have done,” he says. “But I told my idea to the Water Supply Board engineers and they told me it would work.”

An average person uses the flush toilet about 10 times a day, draining out over 100 litres of water in the process. According to Vinodkumar, it is an enormous waste of water that could have easily been allocated for other purposes, including drinking, cooking and doing daily household chores. In comparison, household chores and drinking water comprise only a small part of every home’s daily water consumption.

You might also like: 5 Clever Ways You Can Use the Waste Water Generated by RO Purifiers in Your Daily Life

Reports have suggested that people can use up to an astounding 300 litres of water a day, most of which drains out as blackwater. By reusing the grey water, the Saxena family has managed to eliminate this expense entirely. Little wonder their water bills are at an all-time low.

“It also requires very little maintenance,” he says. “I find many people complaining about water being dirty, but it’s only natural that the water will have some amount of trust. Cleaning the tankers at home regularly is enough. We get all our tanks cleaned once a month and it works. We use a simple filter in our kitchen, and we have not had any issues. Aren’t these small expenses better than having to spend on medical bills?”

A small rainwater harvesting system keeps the family’s groundwater use in check. The terrace is sloped to let the rainwater make its way via a pipe to a separate underground tank. “The tank has no concrete base—we have kept it as natural as possible,” says Vinodkumar.

The rainwater accumulates in the water and gradually seeps into the groundwater system located next to it. He says, “Borewells in my neighbours’ home are dug to 750 feet, and I’ve heard that buildings around Sarjapur have dug almost 1500 feet into the ground. My bore well is dug at just 145 feet and it gets recharged with rainwater too.”

Keeping up the zero-waste initiative, Arti uses the extra kitchen water to nourish her garden filled with flowers, vegetables, herbs and a most intense peppermint.

“We have been composting for about two years now, and use it as fertilizers on our plants,” she says. A former journalist who worked at a local newspaper, she feels that small measures can make a world of difference in modern households. Apart from composting, she also makes her own mulch for the garden.

Incidentally, the family does not own a car or Vinodkumar insists he would have used some of the greywater to wash it too. He also highlights that contrary to popular notions, these process are cost-effective and easy to maintain. “It cost me barely ₹20,000 to install the plumbing system,” he says. “The prices have risen but it only costs a fraction of the amount we spend on building and decorating homes now. And think about the difference it makes to our bills.”

You might also like: This Bengaluru Man Can Run an Air-Conditioned House Without Paying a Rupee in Electricity Bills

Having tackled the water crisis, the couple has now turned attention to lowering their electricity consumption. They switched to CFL lights in 2010 and are now changing to LED lighting for their home. They have installed special low-energy ceiling fans and have done away with geysers entirely. “We have installed solar panels on our roof and that takes care of hot water. We now want to install solar lighting.”

Living green means that the couple has to face strange questions and bewildered reactions. “We have had relatives asking us why we are saving water,” says Arti. “I ask them, why not?”. Vinodkumar also makes it a point to share his knowledge with others and happily invites people to come to the house and see how the system can be replicated.

The couple are constantly looking for new ways to lower their carbon footprint and cut their water and power consumption. Along with solar lighting, they are now also seeking ways to purify their greywater further. “We want to be a self-sustaining, self-contained unit,” the Saxenas say in unison.