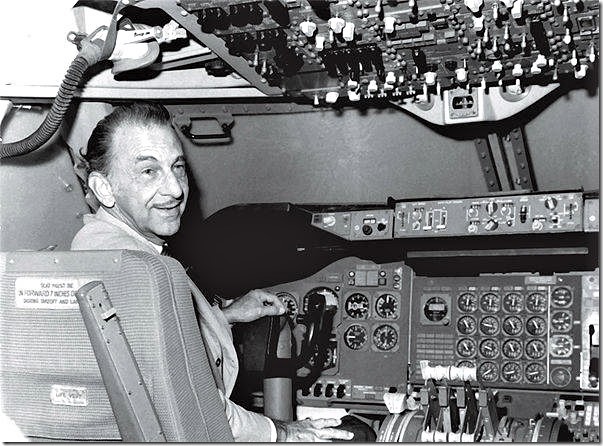 “If you want excellence, you must aim at perfection. It has its drawbacks but being finicky is essential.” – JRD Tata

Most Indians remember Jehangir Ratanji Dadabhoy Tata, better known as JRD Tata, as the man who headed the largest industrial group in India for five decades. What few know is that he also played an important role in the history of India’s flagship carrier, Air India.

Born on July 29, 1904 in Paris, JRD was the second child of Ratanji Dadabhoy Tata and his French wife Sooni. Little Jehangir was passionate about flying and grew up admiring French aviators Louis Blériot (the first man to cross the English Channel by air) and Adolphe Pegoud (the first fighter aircraft ace in history).

In his later interviews, he would often recall how he had fallen in love with flying after seeing a plane land on Hardelot beach in France for the first time. “It was flown by Adolphe Pegoud, the first man to loop-the-loop. From then on I was hopelessly hooked on aeroplanes and made up my mind that come what may, one day, I would be a pilot,”JRD would say.

JRD, who grew up in France, renounced his French citizenship in 1929 and returned to India. Twelve days after the launch of India’s first flying club in Bombay – the Aero Club of India & Burma – JRD achieved his dream of becoming a pilot.

He completed his first solo flight on February 10, 1929, after just three-and-a-half hours in the air with an instructor to get the first flying license to be issued in India.

In 1932, JRD set up Tata Air Services, the first Indian commercial carrier to transport mail and passengers within India. In the absence of proper facilities, the firm was initially based out of a small hut with a thatched roof at the Juhu Airstrip in Bombay.

On October 15, 1932, a date that made aviation history, JRD famously piloted the first-ever flight of the Tata Air Services from Karachi’s Drigh Road Aerodrome to Mumbai’s Juhu Airstrip via Ahmedabad. The aircraft was a single-engined De Havilland Puss Moth and it carried 25kg of 4-anna airmail letters.

“On an exciting October dawn in 1932, a Puss Moth and I soared joyfully from Karachi with our first precious load of mail, on an inaugural flight to Bombay. As we hummed towards our destination at a dazzling 100 mph, I breathed a silent prayer for the success of our venture and for the safety of those who worked for it.

We were a small team in those days. We shared successes and failures, the joys and headaches, as together we built up the enterprise which later was to blossom into Air-India and Air-India International,” JRD recalled later.

In 1932: JRD Tata prepares to take off from Karachi, on his inaugural flight carrying cargo of mail to Bombay.

In its very first year of operation, Tata Air Services went on to fly 2,57,495 km, carry 155 passengers and transport over 10 tonnes of mail. The same year, it also launched its longest domestic flight – Bombay to Trivandrum with a six-seater Miles Merlin monoplane. As these aeroplanes were tiny, the occasional passenger had to travel while sitting on top of the mail bags!

Re-christened Tata Airlines in 1938, the firm became a public limited company on July 29, 1946 when regular commercial service was restored in India after World War II. It was renamed Air India Ltd and headquartered at the Tata head office in Bombay.

Two years later, in 1948, Air India launched its international operations to Europe. On June 8, 1948, Malabar Princess (a 40-seater Lockheed L-749 Constellation) flew over 8,047 km from Mumbai to London via Cairo and Geneva. Air India’s maiden international venture was captained by K.R. Guzdar and D.K. Jatar, and carried 35 passengers, including JRD.

Among the several people waiting to receive passengers was Mr. Krishna Menon, then Indian High Commissioner to Great Britain. Flashbulbs popped as JRD stepped down from the aircraft, shook hands with the Indian High Commissioner and turned to the media with a broad smile. “Set your watches, boys. We are right on schedule!” he affirmed, clearly delighted at the achievement.

In 1953, Air India was nationalized, with JRD being appointed the company’s first chairman (he remained in charge until 1978). In October 1962, on the first flight’s 30th anniversary, JRD commemorated the occasion by flying solo from Karachi to Mumbai in a Leopard Moth plane.

In 1990, JRD’s vision was finally fulfilled when Air India, in association with Indian Airlines and the Indian Air Force, created a world record by evacuating 1,11,000 people from Amman (in Jordan) to Mumbai in 59 days just before the Gulf War broke out in the Middle East. This was the “the largest evacuation effort by a single civilian airline.”

This was probably JRD’s greatest contribution to modern civil aviation in India. As he put it, “No success in material terms is worthwhile, unless it serves the needs or interests of the country and its people.”

A year after he was awarded India’s highest civilian honour, the Bharat Ratna, JRD Tata passed away in Geneva on November 23, 1993, at the age of 89. On his death, the parliament of India was adjourned as a tribute to JRD – a rare honour usually not given to people who are not members of the parliament.