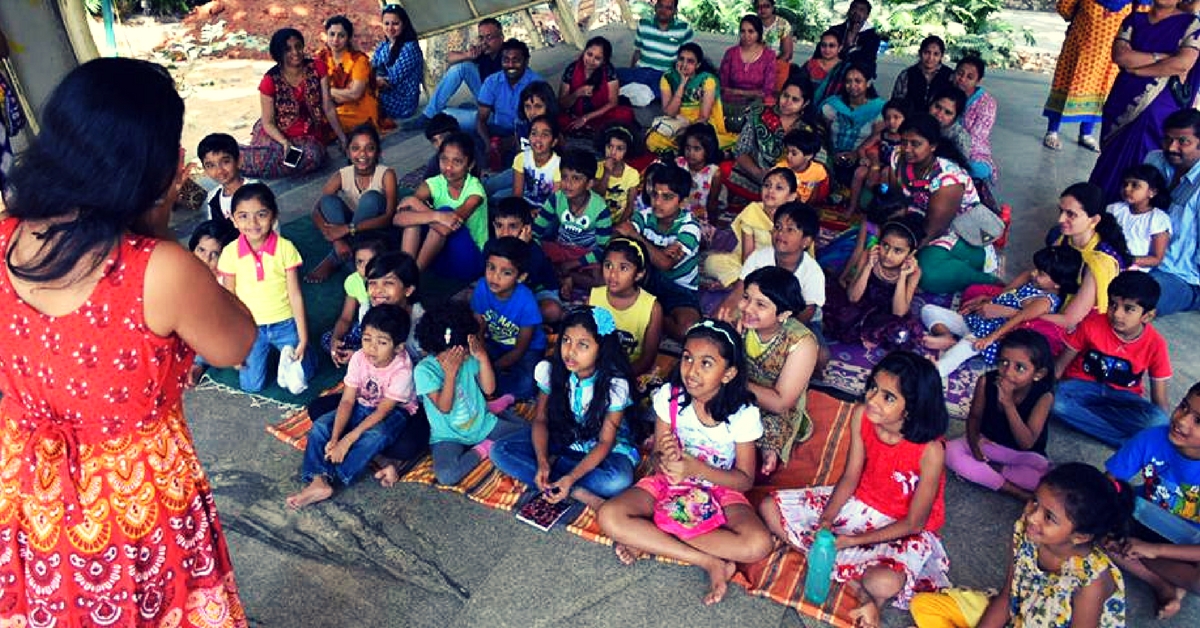 Kagakka Gubakka, which translates to Crow and Sparrow, is an initiative to bring back the childhood full of stories and outdoor games for the kids living in the metro city Bengaluru!

“I grew up in a joint family with my grandparents always around to play with me and tell me a lot of stories. We would also go to the playground every evening and play a new game every day. So now when I see kids around me growing up in nuclear families with no playgrounds to play at and nobody around to tell stories and teach games, it just doesn’t seem right,” says Smrthi Harits.

An engineering student studying in her fourth year in Bengaluru, Smrthi has started the initiative Kagakka Gubakka (the crow and the sparrow) to recreate a childhood for urban children that the people born until the early 90s enjoyed.

“There were open spaces when I was a kid. Well, more in comparison of what we have today at least! And then there were more people around as we were growing up- whether it were family members, neighbours, children of neighbours, children residing in the adjacent alley. And by more people I don’t just mean the number, I mean the connection. I remember playing Kolaata on Sankranti growing up. Now children don’t even know what Kalaata is,” says Smrthi.

To bridge the widening gap between children and the vast cultural heritage, Smrthi had an idea to start an initiative to bring children together to learn about our culture with the help of storytelling and traditional games. She posted her idea in a Facebook group titled Malleshwaram and Sutta Mutta, an online community of Malleshwaram residents. She received a tremendous response and everyone from parents to teachers to college students encouraged her to pursue the idea.

Also read: Meet the Teenager Setting up Libraries for Children in Ladakh

That is how in July 2016, the very first session of Kagakka Gubakka was conducted. The name of the initiative is inspired from the well-known children’s tale of a crow and a sparrow. Since then, Smrthi, along with a few student volunteers and active parents, has been running the initiative every week in Malleshwaram. Joining hands with Act India Foundation, the initiative recently started holding sessions in Basavanagudi as well.

Kagakka Gubakka tries to evoke interest about the rich Indian culture in children’s minds through storytelling. Following the traditional format of storytelling, the Kagakka Gubakka storytellers narrate to the children popular traditional stories of Akbar Birbal or Tenali Raman, stories from Jatak Katha, Panchatantra, and other mythological tales like Mahabharata.

Accompanying the storytelling sessions are the game sessions, where the children learn and play different traditional games like Kho, Kabaddi, The cow and the tiger, Kanna Muchale (hide and seek) and even some board games like Chowka Bara.

The initiative has seen a positive response from children as well as parents and currently has over 200 participants every session. Most children come back for the next session once they have been initiated, informs Smrthi.

Sudha Abhiram, a member of Act India and mother of an 8-year-old boy, feels that the initiative is extremely necessary for children who are used to getting lost in the world of video games.

“Neil, my 8-year-old son loves these sessions. He hasn’t missed a single one so far. It does so well for the children who are cooped up inside the house and school for the entire week- here they get to do some fun physical activity and also learn so much about the culture,” says Sudha.

The group celebrates different festivals like Holi, Diwali, Christmas, Ramzan in traditional style and tries to revive certain lost traditions whenever possible.This year on Sankranti, all the Kagakka Gubakka participants came together and learnt Kolaata- a traditional dance done on Sankranti for ages in Karnataka.

“What seems like a precursor to Dandiya, learning more about Kolaata and actually practicing it was an incredible experience for the children. We wish to spread this initiative to other parts of the city as well and gift more and more children with a fun-filled childhood,” says Smrthi.