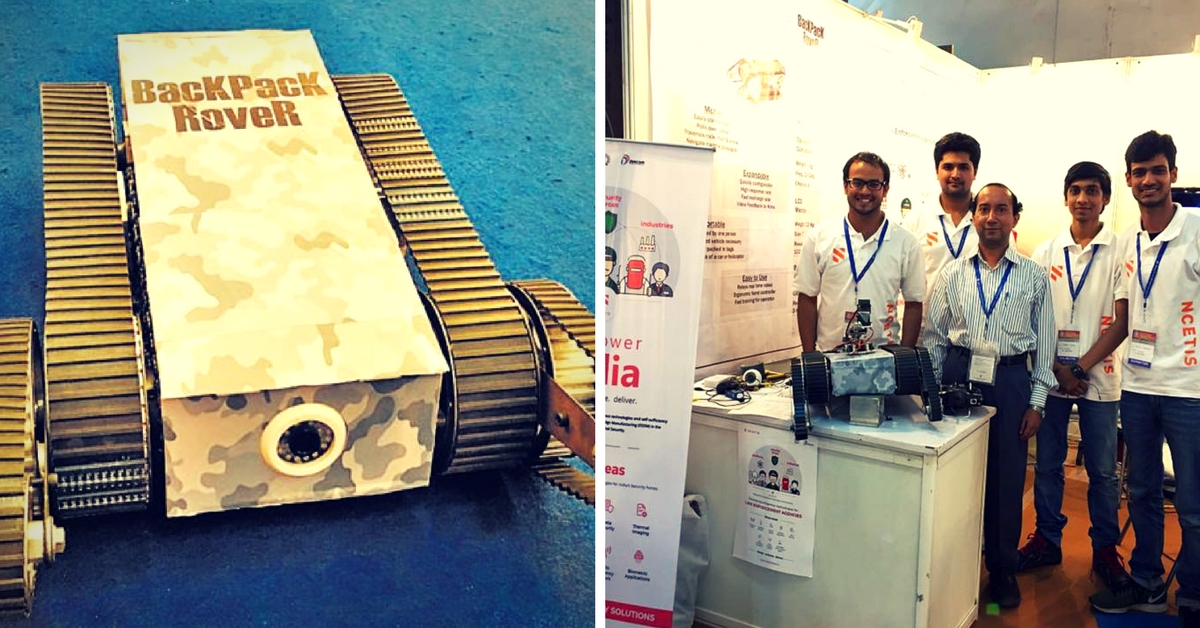 A remote-controlled wireless robot developed by a team of engineering students at IIT-Bombay will soon be used for tracking the movements of leopards and other wild animals by the Maharashtra State Forest Department.

The robot, called Backpack Rover, designed by members of IIT-Bombay’s Innovation Cell can record and transmit video footage in real-time.

It will be a huge improvement over the camera traps used by the forest department currently, which are mounted on light poles and trees in forests. With the moving robots transmitting live video feed from the ground, the task of monitoring the animals will become much easier.

The design for the robot was first developed by the team in 2013 for the student design competition organised by the American Society of Mechanical Engineers (ASME).They worked tirelessly to come up with a model of the robot in a month. Their design won the second prize.

Less than a year later, the various ways the robot could prove useful became apparent. A prototype of the Backpack Rover was used to track a leopard that had entered the IIT-Bombay campus in June, 2014. The forest department had organised a search effort to trace the animal’s movements and took the help of the Backpack Rover.

“That must have given the forest authorities confidence that this can work at the ground level,” says Ankit Sharma, one of the team leaders of the Innovation Cell and a fourth-year B. Tech student. The Innovation Cell was founded in 2007 with the aim of encouraging students to participate in international innovation competitions like the ASME.

A five-member committee appointed by the Maharashtra government is currently looking into ways to upgrade the technologies used by the forest department. State Forest Minister Sudhir Mungantiwar told Hindustan Times that the department is in the process of drafting a proposal to be submitted to IIT-Bombay for acquiring the Backpack Rovers.

“We are thrilled, of course! Since we are a part of IIT Bombay, all the procedure will take place through the institute. Our professors have informed us that the government will soon be acquiring a few robots from us. However, it’s expected that the process will take a time of a couple of months at least,” says Ankit.

A range of features make the Backpack Rover a good choice for the forest department.

“Backpack Rover has tracks to manoeuvre on rough terrain,” Ankit explains, “and an onboard video acquisition card, as well as a micro-controller to store, process and transmit data to a seven-inch LCD monitor.” He added that the latest model does not produce a lot of noise while moving. “The combination of a sturdy build and advanced technology makes it a perfect match for the forest department’s requirements,” he said.

The unmanned mobile rover weighs 25 kg and can travel at a maximum speed of 7 km/ hour. Its 22-volt battery can last five hours once fully charged. The remote-operated vehicle was originally designed by the students for potential use by the military.

“The government’s Department of Science & Technology has set up National Centre of Excellence in Technology for Internal Security (NCETIS) last year. One of our professors and a team of students started working to develop robots that could be used in the military. Our team too, contributed to the project and we developed the Backpack Rover for the India Security Expo that took place in Pragati Maidan. The name Backpack Rover was chosen to convey the idea that it could fit easily in a soldier’s backpack. Even at the expo when we presented the robot, some officials from the Forest Department had shown interest in its functioning. I think they had got the idea then itself,” concludes Ankit.

To know more about Innovation Cell of IIT-Bombay, visit their Facebook page here.

Also read: This Discovery by Indian Scientists Can Reduce the Cost of MRI Machines Significantly!