MY VIEW: 9 Must-Watch Plays of All Time for Theatre-Lovers in India

Theatre is not just a form of entertainment but also a means to educate and make audiences think about the society they live in.

Theatre is not just a form of entertainment but also a means to educate and make audiences think about the society they live in. People go to theatre shows to forget reality and believe in the unbelievable through a “willing suspension of disbelief” — a phrase coined by poet-philosopher Samuel Taylor Coleridge. The Indian theatre scene has seen a growing number of people willing to watch and indulge in plays over the years. Here is a list of 10 such plays you must watch whenever you get the chance. Krishnan’s Dairy explores the world of a Malayali immigrant in New Zealand and his relationship with his wife. Both characters, Krishnan and Zeena, are played expertly and believably by Jacob Ranjan, who alternates between the two roles through the use of masks. The play, written by Jacob Ranjan and Justin Lewis, revolves around the Indian dairy Krishnan owns, his arranged marriage to Zeena and their newborn child. Ranjan effortlessly inhabits the quirks of a Malayali in his speech and posture, which transform completely, along with his voice, when he puts on a woman’s mask denoting Zeena – with a lilt in his words and the slight sway of a woman’s hips. Justin Lewis’ direction is impeccable with minimal sets, clever use of props and well-coordinated sound and lighting design. This Indian Ink production is a good example of using limited stage space and engaging audiences successfully in a willing suspension of disbelief. Rib-tickling humor and thrills are guaranteed. Produced after the December 2012 Nirbhaya incident that shocked the country and let to protests around India, the play, directed by Yael Farber, brings a stellar cast of actors, many of whom have themselves faced sexual abuse at some point in their lives. Only two of the seven cast members, Japjit Kaur (who plays Jyoti Singh) and Ankur Vikal (plays one of the male attackers) act in the real sense. The rest, including Sneha Jawale who was doused with kerosene and set on fire by her husband and had her son taken away, recall their real-life experiences on stage. The play is profoundly moving and leaves the audience thinking about what happens to women in a patriarchal society to this day. For those who love the exuberant energy of the 1950s school life in America, portrayed so evocatively in the movie Grease, the theatrical version of the musical is even more enthralling to watch. In India, it premiered in Mumbai in 2013, and was produced by Raell Padamsee’s Ace Productions. The play, with the sky high backdrop of Rydell High along with shiny, black and pink leather jackets for costumes and the trademark grease hairstyle of the boys, transports the audience back in time. Elaborate sets and technical expertise, coupled with unmatched singing ability while acting and dancing (called a triple threat in the theatre world), thrill the audience. The costumes match the time period the play is set in and songs like ‘Summer Nights’ and ‘Hopelessly Devoted to You’ have the viewers tapping their feet. How does one adapt a play about the death of the American dream and put it in context for Indian audiences? Alyque Padamsee essays the role of Willy Loman and reaches into the depths of the character to portray the angst and disillusionment of the man on stage. Although the play has been performed 742 times on Broadway, Alyque Padamsee’s portrayal of the iconic character is most remembered in India. Considered one of the greatest plays of the 20th century, Death of a Salesman brings to surface human anxiety and how ambition and dreams clash with one another, leaving a broken disillusioned person in between. It also talks about the fragile structure of marriage and familial relations. The play exposes the flaws inherent in the idea of the American dream of equality, and could be interesting to look at in the context of the upcoming Trump presidency. 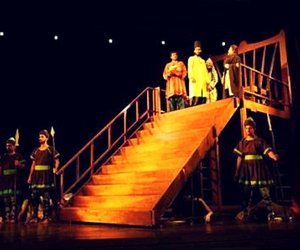 Girish Karnad’s Tughlaq, written in 1964, is the playwright’s take on the eponymous Sultan of Delhi from 14th century India. He looks at the situation from the other end of the telescope – in his version, the sultan has a vision of uniting Hindus and Muslims that goes haywire and his rule turns into a failure. Karnad masterfully juxtaposed Mohammed-bin-Tughlaq’s idealism with the Nehruvian era where India looked for transformative direction, which ended in disillusionment in both cases. The play visualizes the abyss between what is and what can be by exploring political overtones and how a genius vision can lead to chaos and fragmentation, thus becoming a powerful part of history.

If you are ever caught in an existential crisis in life, Badal Sircar’s Ebong Indrajit is the play to watch. Badal Sircar was the pioneer in performing anti-establishment theatre during the 1970s and extending the proscenium to public spaces. He worked well with experimental theatre and street theatre. Ebong Indrajit (And Indrajit) was a landmark Bengali play that exposed the banality of existence, bordering on Absurdism. The play captured the “loneliness of post-Independence urban youth with dismaying accuracy.” Identity is a theme well explored in the play and its title (And Indrajit), where people are perceived as the society they represent, not what value their individual existence holds. Like most Absurd plays, it contains neither a rational or coherent plot. With its cynical and repetitive lines, Badal Sircar seeks to show that “the past and the present are ends of the same rope.”


Translated to Silence! The Court is in Session!, the play, written by Vijay Tendulkar, was called controversial when it was first staged because of its subjects of extra-marital affairs and infanticide. The play is about a mock trial of school teacher Leela Benare, who is “charged” with infanticide and for having illicit relations with a professor. The narrative is gripping and exposes a patriarchal society’s hypocrisy. The play within the play oscillates between reality and illusion, exposing the dark secrets of Benare’s private life. The play emerged as a protest against fundamentally orthodox traditions and questioned the role or position of women in society. Written by Jerome Kilty and directed by Sayadev Dubey in 2013 in India, the Broadway play Dear Liar is a theatrical representation of the Irish dramatist George Bernard Shaw’s relationship with Mrs. Patrick Campbell, a popular stage actress in England in the 1900s. The Indian version of the play has been performed with Naseeruddin Shah and Ratna Pathak Shah in the lead roles where they recreate the personal and professional relationship Shaw and Campbell shared through the letters written over a period of 40 years. It transports the audience back into the 19th and 20th century British-American traditions, complete with the rich, flowing gowns and hair neatly piled up. The play is delightful to watch with the chemistry shared by the cast enhancing the performance even further. The Sanskrit play written by Mahakavi Bhasa revolves around Bhima, one of the Pandavas from Mahabharata, meeting his half-demon son Ghatotkacha for the first time. It is based on Natya Shashtra conventions of exaggeration, stylized delivery of dialogues, and raw energy. Even though the play was written long ago, it has contemporary relevance as it showcases power, gender politics, and relationships in a riot of colours and music.