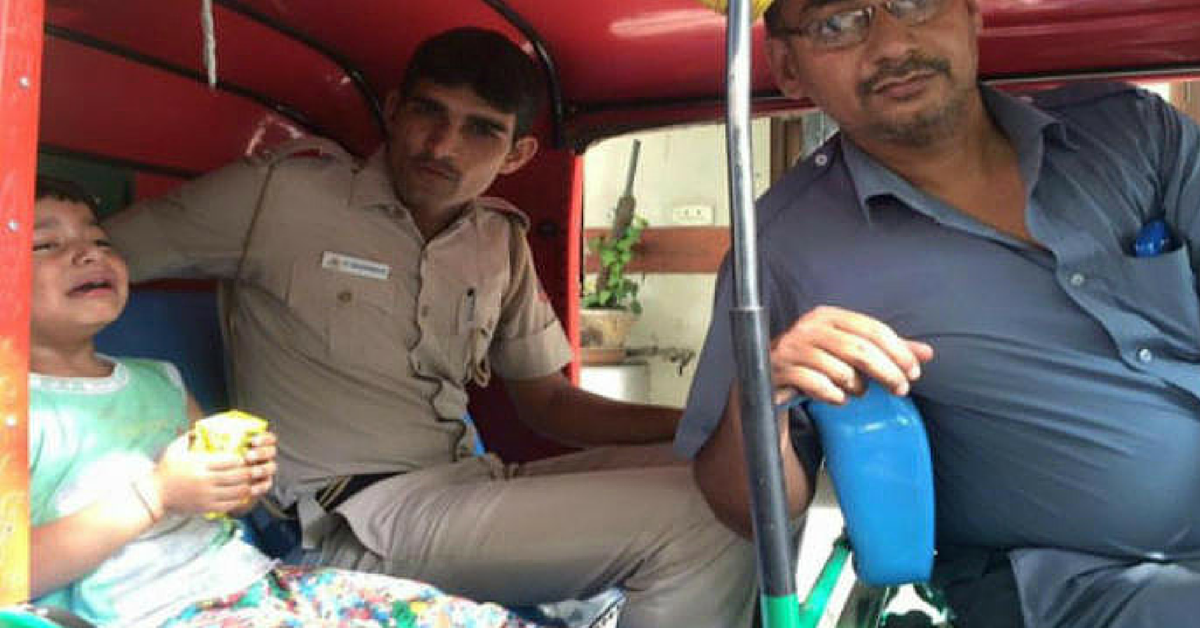 Too often, we hear of the horrifying fate that befalls lost children and runaways. Human trafficking, sexual exploitation, induction into a life of crime… the list of things these children are vulnerable to is long and horrifying. It is heartening then to hear of even one child saved from such a life, more so when it is the actions of two Good Samaritans that saved him.

Three-year old Parul lives in the Kalkaji area of Delhi with his grandfather, Tirat Kohli. The child’s father passed away two years ago and his mother no longer lives with the family.

Parul was playing out one morning when, it is believed, he was lured away by someone with sweets and toys. The child walked from his home to the main road two kilometres away and boarded an auto, saying he was looking for his parents.

When the auto-rickshaw driver asked him where he lived, the child burst into tears and was inconsolable. The crying child was brought to the attention of Constable Dharmender, who was just about to begin his patrol duty.

Constable Dharmender reported the incident to his seniors at around 8 am and then, with the help of the auto-rickshaw driver, set out to help find the kid’s home.

Constable Dharmender asked the auto-rickshaw driver to drive him to every house in the Kalkaji area of New Delhi. The duo drove around Block A, B and C of Kalkaji, knocking on every door in the hope of finding Parul’s home. The child could identify only a few houses himself.

A police officer told The Times of India, “Everyone he asked gave him directions which helped him map his way to the child’s house. Being a beat constable, Dharmender was aware of the locality.”

It was when an elderly man recognised the child that the constable finally got a solid lead. He then followed the man’s directions to Parul’s house and placed the crying child in the waiting arms of his grandfather.

DCP Mandeep Singh Randhawa has announced that the constable will be rewarded for his efforts to ensure the child’s safety.