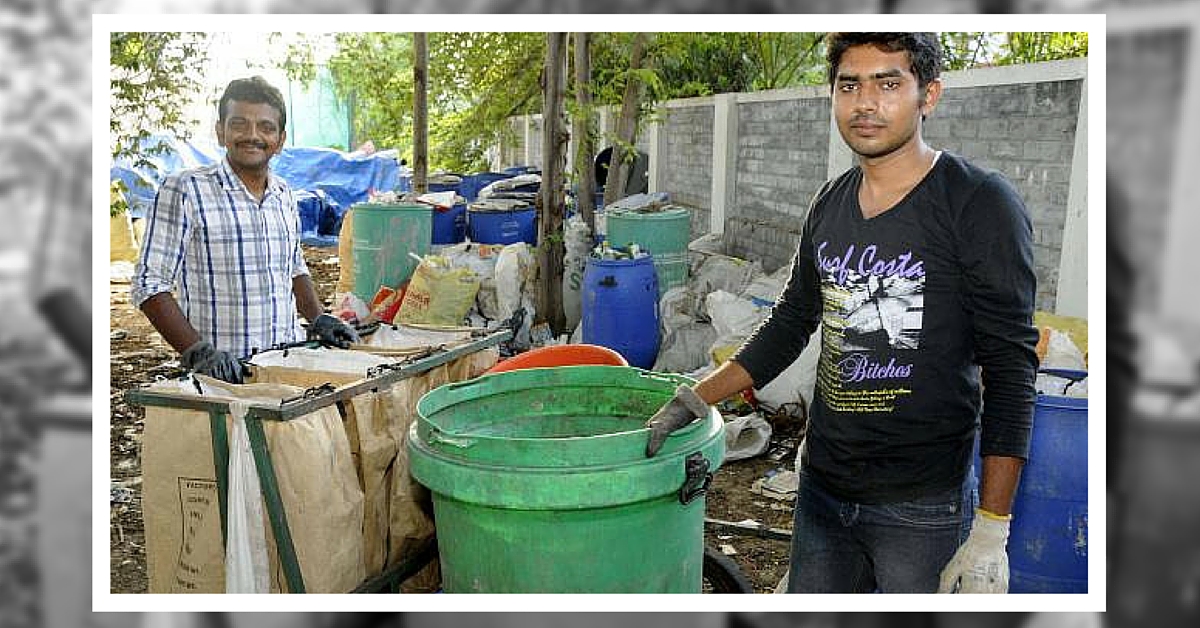 In Coimbatore, two fresh out of college graduates are tackling the issue of waste management hands on. C Prashanth and D Saranraj, 24-year-old engineering graduates, start at 6 AM every morning, going from one apartment complex to another, collecting waste, segregating them, and then sending it off for processing.

They started Meiporul, an NGO, in 2015, and one year on, they have inspired residents to segregate waste. “We have gone to each house to tell people how to segregate. And now almost all of them comply with the basic separation of the waste into organic and inorganic,” said Saranraj to The Hindu. “If each household spends just two minutes being mindful when it discards its waste, Coimbatore can turn into a zero waste city.”

The duo ensures that waste from about 12 apartment complexes as well as the airport are segregated and processed.

Households in the complex are given two bins and one bag each. The duo encourages every house to separate waste into wet, dry and hazardous, and then put it into kiosks set up in every apartment complex.

From here, wet waste is put into a compost, while dry waste is transported to companies that can convert it into fuel, and hazardous waste is sent to incineration plants. To facilitate waste management, the duo have tied up with the city corporation, while ACC Cements and Residents Awareness Association of Coimbatore donated two e-carts for transportation.

While still in school, the duo realised that being environmentally conscious was every individual’s duty. “When we were in college, we took part in several cleaning programmes. But we soon realized that the waste collected by us was dumped in dust bins and then dumped at the Vellalore dump yard,” said Prashant to Times of India.

“We wanted to come up with a better system to manage waste.”

So far, about 2 tonnes of waste is collected from households, every day. They also collect and process four tonnes of waste from the Vellalore landfill daily, to reduce the environmental burden at the dump yard.

Of late, the NGO attracts a lot of youths who are interested in making a career out of waste management, just like them. As students, they are involved in the activities from 3 PM to 8 PM every day.

Their plan for April is to spread their reach to about 15,000 households, to set up more than 20 kiosks around the city. Adding to the mobile revolution for a cleaner India, the duo even set up an app for employees and volunteers to record their daily activities.