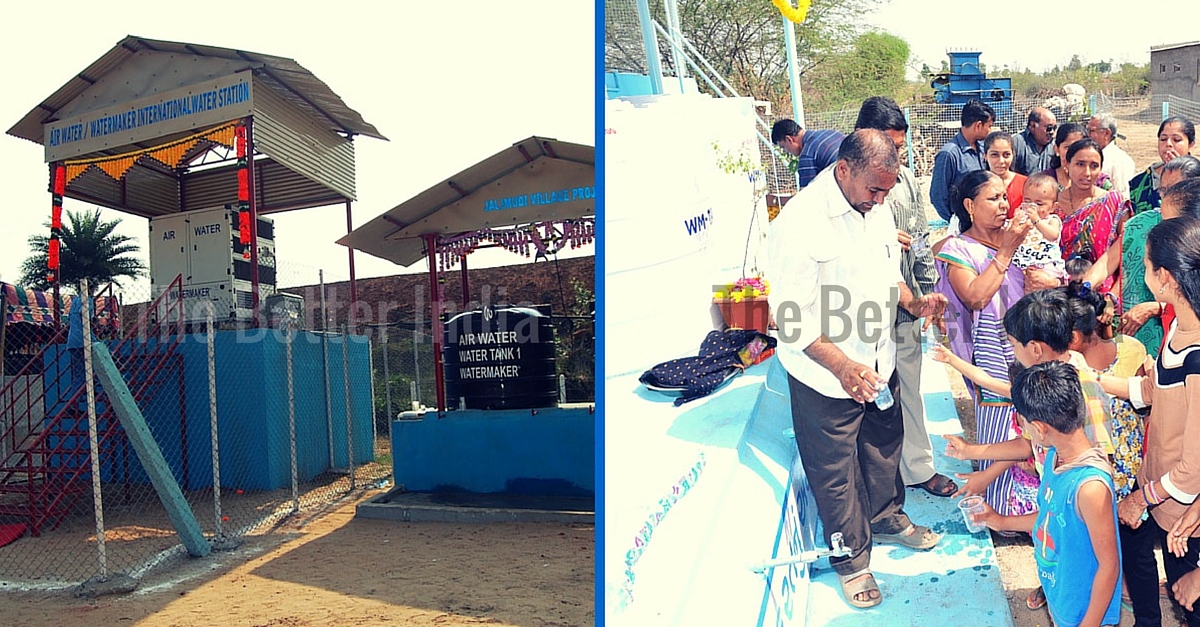 In a country where women often have to walk miles to find and collect drinking water for their families, the WaterMaker project to produce water from thin air is no less than magical. It is, in the words of one grateful recipient, “khuda ka paani.”

What is the first thing that comes to mind when you hear the words: “producing water from air”? When Meher Bhandara, the founder and director of WaterMaker India, heard them, she was intrigued. “Water from air? How is that possible?” she wondered.

Today, Meher and her small team of eight people, are making it possible for many places in rural India to enjoy clean and pure drinking water produced right out of air.

“When we first heard of this technology in 2004 from a scientist in the US, we laughed. But after he told us more about it, the first thought that struck us was that India needed clean drinking water desperately. We checked out the machines that use this technology and were really amazed. As social entrepreneurs, we decided to make these unique Atmospheric Water Generators (AWGs) in India, so we could provide clean and healthy drinking water to people who needed it the most…Today we are proud to say that we have the largest range of AWGs — producing from 120 litres to 5000 litres per day. We also export these WaterMakers (AWGs) to many other countries,” says Meher.

Meher and her team took part in an exhibition in Delhi, where they showcased one AWG machine just to see how people would react to it. “The people were completely amazed. They could actually see drops of water forming from thin air. People were literally walking around the machine and looking under it to see if there were any hidden pipes.”

It was then, in 2004, that they decided to manufacture the machines in India itself so as to have control over the quality and delivery of the machines.

So how does air lead to the production of water? The machines work basically on the simple refrigeration technique of condensing the humidity in the atmosphere and collecting the resultant water. After the condensation process, the water is passed through various filters to purify it, resulting in clean drinking water.

“Our technology is most effective in areas where the temperature is between 25 and 32 degrees Celsius, with relative humidity conditions over 65-75% or more. Producing water directly from air, WaterMakers need no water source. Using electricity or any alternate energy source, we use techniques optimized to condense water from air. Water quality complies with WHO/BIS standards and the water contains no harmful chemicals, bacteria, pesticides, or minerals,” explains Meher.

Inside villages in India

WaterMaker India is a for-profit company, which aims to give back to society through its CSR (corporate social responsibility) initiative. With the help of this amazing technology, the company has made Jalimudi in Andhra Pradesh the first village to have drinking water supplied from air. Like many other parts of rural India, this village too was facing several issues like lack of pure drinking water, ground water being contaminated, and villagers walking long distances to collect water.

“Our very first project was our own CSR project at Jalimudi village in Andhra Pradesh, where we set up an Air Water Station in 2009 to provide safe drinking water to over 600 villagers. We have just installed another Air Water Station at Gandhigram in Gujarat for the local water authorities. The first one was already installed for the villagers in April, 2015, and consisted of two 1000 litre WaterMakers, which generate 2000 litres of fresh drinking water per day, and three storage tanks. An insurance company has also set up WaterMaker drinking water stations at night libraries for students in Mumbai and more projects are in the planning stages.”

“We are not a completely green technology yet because we need power to run the machines. We hope to change this in the future with solar, wind, and alternate power sources. Can you imagine if we have alternate power giving alternate water, what a great thing that would be? That is my ambition right now,” says an excited Meher. She also plans on expanding the reach of WaterMaker by working with more government initiatives and NGOs, so as to impact as many people as possible.

“When we set up our very first Air Water Station at Jalimudi village in 2009, the villagers were thrilled to see water being produced from air, drop by drop. I was extremely touched when a very old lady came up to me and blessed me, saying ‘you have given us Khuda ka pani!’ She had tears in her eyes and so did I. The women and young girls who had to walk almost 3 kms every day to collect water couldn’t thank me enough for this ‘magical water,’ which would save them precious time for more productive activities. I will never forget the look in their eyes and am determined to set up many more WaterMakers wherever I can. Though we are a for profit organization, I also firmly believe in giving back – drop by drop!” concludes Meher.

To know more about WaterMaker India, you can visit their website here.