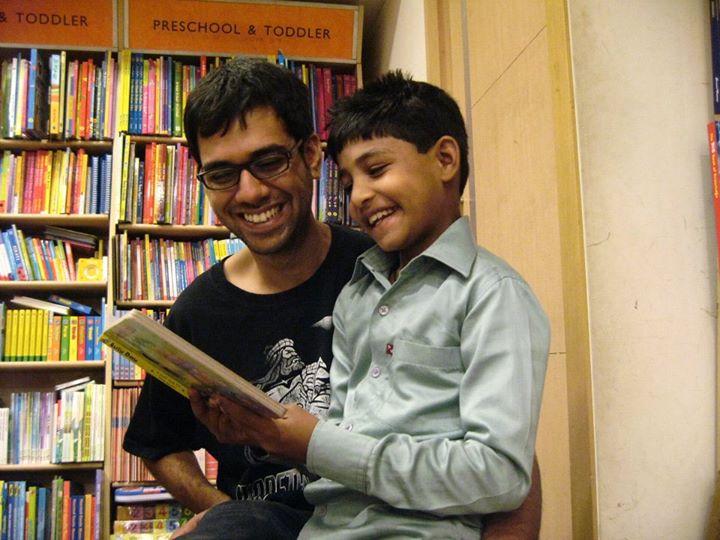 It’s just another day at Geeta Vikas Vidyalaya in Shivaji Nagar, Mumbai. A low-income school set amidst the dusty slums of Govandi, it rings with the sound of lesson recitations inside tin-roofed classrooms. The cramped staffroom has notebooks stacked high on every available bit of space with a mix of Teach For India Fellows & municipal teachers trying to find a method within the madness. On being asked, I’m directed to a man surrounded by a crowd of children – patiently answering a stream of never ending inquisitiveness.

Meet Anoop Parik – a Teach For India Alumni who completed his Fellowship in 2012 & currently works as a full-time teacher at Geeta Vikas – & has school staff, students & parents alike swearing by his teaching skills as well his commitment & dedication towards his kids.

“I knew I wanted to be a teacher during my very first week at Institute!” he states with a smile, referring to Teach For India’s rigorous 5-week training program for new Fellows.

It was while he was working as an academic counsellor at the College of Wooster, Ohio when friends in Teach For America & Teach For India inspired Anoop to join the TFI Fellowship in 2010. And there has been no looking back for him since then.

“The Fellowship was almost like a boot camp that prepared me for everything that would come afterwards – in ways I would never have imagined. Teach For India pushes you to maintain a high standard that way. 85% is just not acceptable; you just have to make sure you’re giving your 110% every single day. And that kind of thing stays with you.”

So why stay with Geeta Vikas once it was over, I ask. Why not any other well-paying school across the country? The simplicity of his answer takes my breath away.

“I love my kids – just like a parent or an elder brother would. And I won’t abandon them mid-way – the plan is to see them through their board exams at the very least. My destiny brought me to Geeta Vikas; my resolve to ensure a bright future for these children has made me stay.”

With Teach For India’s intervention, the school has admittedly seen a marked rise in literacy levels. Children have rediscovered their interest in learning – reading, science comprehension & math scores have slowly and steadily improved. But Anoop’s biggest learning has come from the children themselves.

“Time in the classroom has taught me patience. Kids push you like no-one else will and I’ve learnt to work in a calm, planned & organized way even as I juggle a million things & yet at the same time know how to formulate contingency solutions whenever needed. I’ve also learnt empathy. It’s just too easy to scold a child for consistent absenteeism for example – it’s a lot tougher to ask and understand why. There is so much with such kids that doesn’t make sense and constantly threatens to pull you back – and that’s when being empathetic really helps.”

The school bell rings signalling a lunch break & a swarm of kids from various grades pop in the middle of our conversation to say hello. “Hi Didi, what’s your name?” echoes around me as I get swept away in their confident enthusiasm. And it strikes me that if I were to close my eyes and rely solely on what I was hearing, these kids could have been from the best of schools in the city – I would never be able to tell what background they really came from. The sheer power of education is almost overwhelming. Anoop affirms my revelation.

“Every child has potential. For these kids, it just gets clouded by the reality of their existence. A lot of my students are simply trying to escape the same maze of basic survival that they’ve seen their family and friends trapped in. To them, it’s either that or an ultra-rich lifestyle that modern day media exposes them to. They begin to aim for the latter without realizing that there is a middle ground to breaking out as well. And when they understandably fail, it leads to them making wrong choices like dropping out of school or participating in illegal activities through peer pressure. Every child in Shivaji Nagar wants a good education, a good career, a good family – a good life. But they have seen failure around them so many times that they just assume they’ll fail as well. It’s a sense of helplessness that catches on and drags them down – irrespective of the tremendous amount of potential they have.”

This fact brings to forefront just how challenging a teacher’s job has become today and so much more important. I wonder about the support that is essential from all the stakeholders to the education process – especially in such cases. Anoop cites the community as a big example.

“With low-income communities, it’s somehow assumed that the parents don’t care – something I’ve found to be utterly untrue. But at the same time, there is definitely a gap that can be attributed to such parents not being able to give enough time to their children. Pre-adolescent identities are shaped by parents – they can either keep them going or let them fall off the path. Most importantly, they know their kids better than teachers like me ever will. Can you imagine how helpful their active involvement, partnership & feedback would be to our processes?”

What about the government?

“The movement to educational equity is fraught with problems” he says ruefully, “starting at the school level going right upto government policy. The good policies aren’t practical & the practical solutions aren’t backed by policy. We need people working at each level – facilitating overall co-ordination to enable a holistic solution.”

And of course the teachers themselves form the biggest piece of that puzzle – something that Anoop himself clearly exemplifies.

“Atleast 50% of the change we want to see will come from teachers. They’ll be the ones implementing the workable policies at the end of the day. That’s the reason I chose to remain a teacher. I push my kids towards excellence – they’ll tell you how strict I am but they enjoy my classes anyway because they know I won’t let them put in anything less than their best. That is the kind of change that after parents, only teachers can influence!”

And yet today, teaching as a profession is more often than not taken up as a last resort rather than as the option of choice. The label of being a teacher no longer has a mark of privilege attached in the Indian context.

“That’s the saddest part of the entire scenario. Take me for example. I constantly have people, including members of my own family who’ve been erstwhile teachers, asking me – what’s next? It’s not socially acceptable to remain a ‘masterji’ you see. But the way I see it, I attempt to inspire 40-50 young lives every year. If I’m able to bring about a concrete positive change in even 5 of them in my entire lifetime, what could possibly be more prestigious?”

So why does that happen? How did we go from putting our ‘gurus’ on the highest pedestal to looking down upon their choice of profession? “The day a society stops aspiring to a particular job, that job will cease to be effective. And that’s exactly what’s happened. We don’t train our teachers enough- we definitely don’t pay them enough. No job is as undervalued as teaching in India today. How can teachers be expected to give their best, when they’re struggling with their own financial problems? And when they don’t give their best, they push themselves even lower in the scheme of things. It’s a vicious cycle – one that desperately needs attending to.”

As the conversation flows, I ponder over Teach For India’s vision. That one day ALL children will attain an excellent education. And I can’t help but silently applaud Anoop’s clarity of purpose towards the same. “It’s not overtly ambitious – I definitely believe that together we can make it happen” he says in response, “For me, that day will be the day when all children will have the freedom to choose their own destiny irrespective of their background. It will have arrived when the children of this country are equipped enough to distinguish between right and wrong. That is the day we would have successfully built a nation of good human beings who would be able to take care of this country in ways more meaningful than from just a capitalistic standpoint. Maybe it won’t be a one generation change – but as long as we’re all able to join this movement and work towards this goal – it’ll all be worth it in the end. And I hope I’m able to inspire as many people as I can during my lifetime towards the same.”

And I sincerely hope we all do. One day, ALL children WILL attain an excellent education.