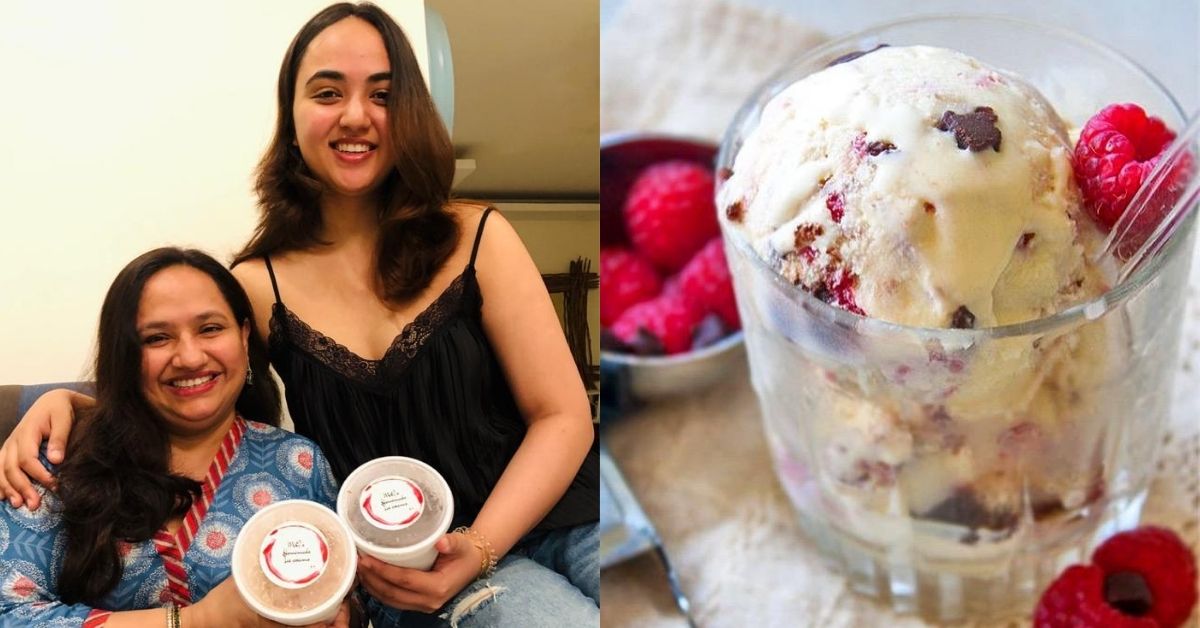 Who would’ve thought that a weekend project would turn into a successful business? Read on to know how MG’s Handmade Ice Creams went from a hobby to a full-fledged business.

How far would you go to satiate your ice cream cravings in the summer during a lockdown owing to the coronavirus pandemic?

The protagonists of my story – Ritu Gupta (50) and Mridu Gupta (24), a mother-daughter duo from Gurgaon – decided to churn ice creams in their own kitchen to satiate their hankerings for ice cream.

Speaking to The Better India, Mridu says, “It was my father who suggested that we try our hands at making ice cream. He is extremely fond of it and missed it during the lockdown. This was his selfish way of getting us to make it at home.” Ritu adds, “For me, Mridu has been so much more than my daughter. We enjoy each other’s company and are travel buddies, too. Starting this business was Mridu’s way of pushing me towards being independent and having something to call my own.”

Mridu mentions that through their various travels, they had a fully-equipped kitchen and when they decided to make ice creams all they required was to find a fool-proof recipe to begin with.

A month-long experimentation with ice cream flavours led to the inception of a brand they call MG’s Homemade Ice Creams.

Since Mridu, a fashion stylist, was busy throughout the week with her freelance assignments, the weekends were dedicated to experimenting with recipes. “We, as a family, sat down and made a list of some of the nicest ice cream flavours we had tasted and started curating recipes for those,” says Mridu.

Beginning 1 June 2020, every weekend at the Gupta household was spent in the kitchen, poring over ice cream recipes, trying to get it right. “Some of our first few flavours included Belgian chocolate, cherries, berries, and even mango, which was the seasonal fruit during the months we had started,” she says.

A month later, in July, the duo started sending out samples to their friends and family.

“The response we received was phenomenal and everyone was sure of the business potential of our product,” says Mridu.

“We didn’t have the time and neither did we want to start an ice cream store where one could walk in and purchase a tub at any time,” says Mridu. The intent was to build something unique that people could order in over the weekend, and thus MG’s Homemade Ice Creams was born as a weekend business.

While there is a menu that the duo has curated, they work with one flavour every weekend, bringing out four news flavours in a month. “We did not want to store the ice creams, so we started making them on Friday and delivered on Saturday and Sunday,” says Mridu.

The first flavour they launched was Irish Belgian. Mridu says, “We wanted to launch with a safe flavour. It was very well received that after the first weekend we already had 25 orders for the next. So, we had Irish Belgian on the menu for two weekends instead of just one as we had initially planned.”

“Initially, we made so many mistakes – the consistency was just not right, we added way too much sugar, we realised that our ice creams were turning out to be very icy. There were so many trials before we got it just right,” says Mridu. Speaking of experimenting with cherries, she says, “The natural sweetness of fruits increases once the ice cream is frozen, which we realised only after having made a few batches.”

The other big issue the duo still faces is packaging. “As much as possible, we’d like to be sustainable and follow good practices while packing the ice creams,” says Mridu. However, using non-plastic containers hasn’t proven to be efficient, and Mridu says that the cardboard or paper packing they initially used would not hold the weight of the ice cream.

“We are currently using reusable plastic containers and are still scouting for better material,” she says.

In a span of two weeks, the duo had sold over 50 tubs of ice cream, and the orders kept pouring in. Speaking about the price, Mridu says, “I admit, at Rs 600 for a tub of 500 gms of ice cream, we do make expensive ice creams. However, the quality we have managed to achieve is of international standards.” With more than 400 tubs of 500 gms of ice cream orders being fulfilled, M G’s Handmade Ice Creams must be doing something right.

“On an average we can churn upto 20 tubs (each of 500 gms) at one go. While we have been making such quantities, with winter here, there has been a slight dip in the orders. We are now actively working towards coming up with a winter-friendly menu,” says Ritu.

The sales have only happened through word-of-mouth since the duo have not resorted to using too many marketing tools.

“WhatsApp groups and social media have helped us a great deal,” says Mridu.

Some of their bestsellers include the coffee bailey liqueur and the fresh fruit ice creams that did very well in the summers. Even with winter upon us, Mridu is sure that the demand for the ice cream will continue. She says, “Who doesn’t like a scoop of nice ice cream with some hot gajar ka halwa or even gulab jamuns?” The duo is sure of continuing to stay busy over the weekends and coming up with newer flavours for people to relish.

· Be 100 per cent mindful of running and maintaining a hygienic kitchen. More so in today’s COVID-19 state, it is imperative to ensure that everything leaving your kitchen is safe for consumption. Also, be careful of practicing personal sanitising processes as well, including proper cleaning of all tools and equipment.
· Use social media to your advantage and invest in getting good pictures of your food clicked. An appetising photograph will ensure that your customer is steered towards placing an order.
· Work out details of who your clientele would be. Once you have narrowed it down, you can work towards fulfilling the requirements of that group.
· Plan your finances and ensure that you buy only equipment and tools that you need immediately. Once your business starts looking good, you can consider making a larger investment.

With no added sugar, 100 per cent vegetarian, and preservative free, these ice creams are a must try. If you are in Delhi/NCR then you know what to do over the weekend – reach out to MG’s Homemade Ice Creams by calling Ritu on 9654409668 or checking their Instagram page here.