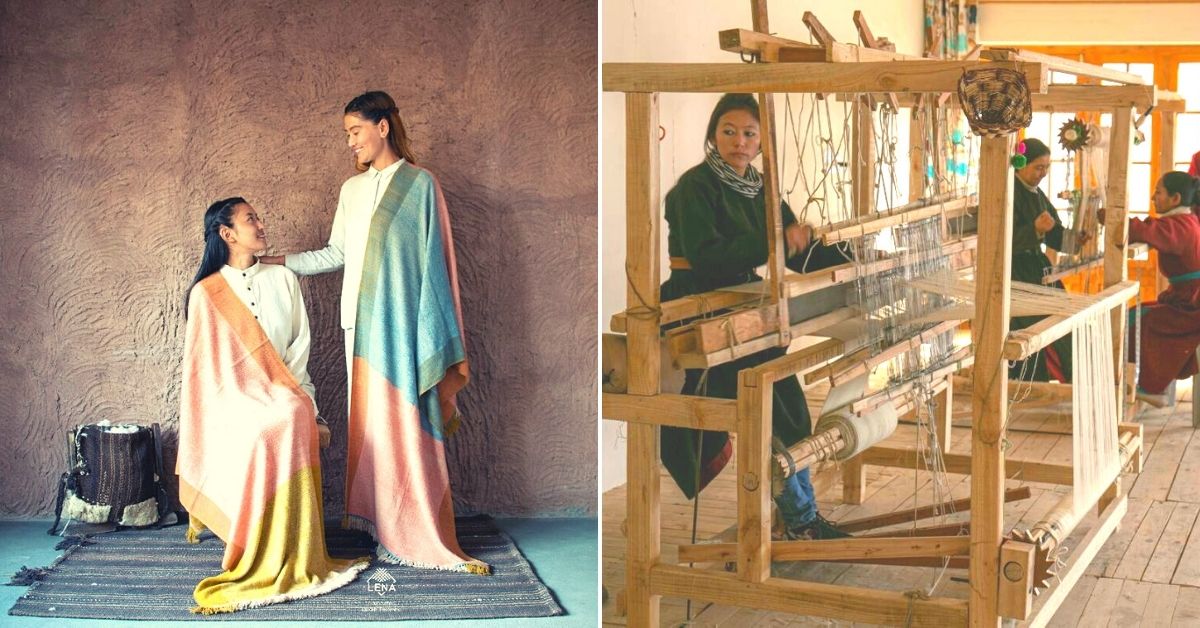 “We don’t expose this rich fibre to any kind of chemical treatment. Some of our natural dyes like marigold and indigo are known to have skin-healing properties as well.”

In recent years, there have been local efforts underway in Ladakh to reclaim ownership of the pashmina trade following centuries of outside dominance, particularly from Kashmir. Multiple ventures in the region are moving into the production of finished products since most of the value is locked higher up in the supply chain.

One such venture is the all-women Leh-based startup called Lena Ladakh Pashmina, which calls itself a “slow-textile label that crafts pashmina products in small batches, where each stage of textile production is carried by hand from spinning to dyeing to weaving.”

Established in 2016 by Sonam Angmo and Stanzin Minglak, the startup has two key objectives:

1) Making apparel in a distinctly Ladakhi manner from spinning with a willow spindle instead of a Charkha, plying with the same spindle, and hand-weaving to dyeing the yarns with locally-found herbs, while ensuring that revenue from the pashmina trade stays local.

2) A commitment towards putting into practice the dying traditional skill of making textiles by hand, while also providing a sustainable and dignified source of livelihood for women from these communities, who for generations have quietly kept these skills alive.

A little less than two years before they incorporated Lena, both Sonam and Minglak were on the cusp of making decisions that would determine their future. While Sonam had just completed her M.Tech in Biotechnology, Minglak was finishing her Master’s thesis on the migration patterns of the Changpas.

“My father worked in the government handloom department. He would always encourage me to come back home after my studies and start something here. At the same time, I found out that my co-founder Minglak was also going through a similar period of uncertainty. Her father too worked in the handloom department. While discussing our potential futures with each other one fine day, Minglak and I decided to venture into Pashmina,” says Sonam.

“Working on my Master’s thesis allowed me to live in Changthang during field visits. Backed with some knowledge of how the Pashmina economy works, I got together with Sonam. However, before we ventured into establishing this startup, we first spent more than a year seeking to obtain a deeper understanding of the fabric, the local pashmina economy and its potential for income and livelihood generation,” notes Minglak.

With assistance from their fathers, who knew local artisans working with a pashmina and understood the subtle nuances of the fabric, both women visited Changthang often. There they would meet artisans, learn about their skill sets and formulate ideas about how they would run a startup centred on this precious fabric.

Thanks to the network they built over the years, today Lena employs more than 58 women, of which only 22 work throughout the year including 6 weavers at their weaving studio on the outskirts of Leh. Most of them work on a seasonal basis, particularly during the winters.

“We collect the raw pashmina fibre from cooperative societies and begin with hand spinning. In Ladakh, the pashmina is handspun via our traditional technique of using a wooden willow spindle. Since the length of the pashmina fibre is short, hand-spinning, it is difficult. But in the past few decades, Ladakhi women have mastered the hard-earned skill of spinning pashmina with their spindles, which was formerly used only to spin sheep wool. At Lena, we have 27 women who spin our pashmina mostly in the winter months when they don’t have to tend to their farms. They make groups of 5 to 10 and spin these raw fibres at their homes where they also get to take care of their household as well,” says Sonam.

Suffice it to say, this skill of hand-spinning the raw fibre is rare and passed on from one generation to another. The same women hand-spinning the fibre are involved in the plying process as well, following which they engage in weaving.

“All of our pashmina fabrics are woven on the fly-shuttle loom at our studio situated in the outskirts of Leh. Currently, we have a team of 6 weavers who have received training from the handloom department. We also weave our local sheep wool rugs on the traditional back-strap loom, which is an indigenous technique unique to only a few parts of Ladakh. Before the establishment of startups like Lena, hundreds of women had received training in elementary weaving and spinning from the handloom department. Sadly, this did not translate into significant employment generation since there were no private enterprises and very few cooperative/self-help groups to absorb them,” notes Minglak.

At Lena, they have six basic weaving patterns that are woven with different colour combinations on their products (pashmina shawls, stoles and knitted pashmina hats to mufflers and beanies). These colour combinations come from natural dyes extracted from local herbs like walnut hull, marigold, Himalayan rhubarb and Arnebia, etc. For red, burgundy and blue, the startup sources the natural dyes from Central and South India.

“At Lena, we control the entire production cycle from spinning, plying, dyeing, weaving and finishing. We are ensuring that all of the pashmina’s innate properties are kept intact throughout the production chain. We don’t expose this rich fibre to any kind of chemical treatment. Some of our natural dyes like marigold and indigo are known to have skin-healing properties as well. Out of all our colours, indigo never ceases to amaze us, which demands a unique technique as compared to the others,” says Sonam.

Inspiration for all these colour combinations on their products come from vibrantly coloured murals, frescoes, thangkas and mandalas in monasteries all over Ladakh. If you visit these monasteries, you can see that those natural colours have remained intact for hundreds of years.

“We are not into mass production. To spin about 30 to 40 gm of Pashmina, it would take about one day, following which there is plying, dyeing, weaving and finishing. To make one piece of Pashmina shawl, it would take about 15 to 25 days from spinning to finishing. However, this time frame depends on the size of the shawl, the type of weave and patterns used. We spin most of the yarn in the winter and keep it ready for orders seeking customised products so that within a week we can weave and apply finishing touches to it. In a year, we only make about 500-600 pieces. Aside from Pashmina, we also make products based on sheep wool-like rugs and fleece-like fabric native to Tibet and Ladakh. We make about 200 pieces of sheep wool products throughout the year,” she informs.

Their products are priced anywhere between Rs 11000 to Rs 30,000 since pashmina is a luxury item. There are a variety of ways in which Lena sells its products.

They have partners in Switzerland and the United States who retail their products. Some of them are retailing the yarn, while others are doing the same with finished products. Orders from them are taken six to seven months in advance.

“We got in touch with these retailers through Instagram. Offers to collaborate came thick and fast since naturally-dyed pashmina yarns are so rare. These retailers visit India once every year, come over to our studio in Leh, check out the products and carry it with them back to places like San Francisco, Switzerland and Boston,” says Sonam.

Last year, Lena opened their own shop in Leh, before which they sold locally through their weaving studio. The customers who came to their shop were predominantly tourists, although it was very well received locally too. Lena tied up with hotels and travel agencies that took their clients to the shop for an authentic souvenir buying experience.

“In winters, we take our products with us and participate in various trade fairs across different cities. This year, we had plans of organising pop-ups in cities like Delhi, although COVID-19 brought that to a halt.

What are the costs?

When it comes to spinning, the standard rate ranges from Rs 2,000 to 3,000 per kg for a pashmina. Weaving, meanwhile, is done at the studio and weavers get paid based on the number pieces weaved in a month. On average, Lena’s weavers get paid anywhere between Rs 12,000 to Rs 15,000 per month.

“Lena has provided me with a dignified source of livelihood. We are weaving even through the winters, which is a huge plus point. Otherwise, many organisations close down in the winters and weavers are left with no source of income. Even during this pandemic, we can earn. We are weaving from the safety of our homes back in the villages. Weaving is my passion, but it’s also a massive responsibility to work with a precious fibre like a pashmina. You make one mistake, and the result shows on the whole shawl,” says Deachen Zangmo, a 27-year-old weaver who has been with Lena since 2016.

The pandemic has taken a toll on the business. However, it’s still up and running. Although little weaving happened this year, they have kept large amounts of yarn ready to be woven into shawls or other apparel next year. Meanwhile, customised orders continue to arrive.

Despite their recent success, Lena has faced some serious challenges to the business.

“Raw material isn’t available throughout the year. They are largely available between July to September and buying them requires significant investment. For 100 kg of raw pashmina fibre, you’ll need about Rs 10.5 Lakh (1 kg for Rs 10,500) in hand. Once the raw fibre is purchased, we have to give it for spinning, which takes another month or so. The production cycle is really long, but more importantly, the government needs to intervene to ensure raw material is available throughout the year. This will help us balance out our costs,” says Minglak

Another major challenge is the urban migration of the nomadic community. Take the example of a nomadic Changpa community in Kharnak, which is a four-hour drive from Leh to its east. Their lifestyle is completely based on livestock, migrating about 5-6 times a year. “The younger generation is no longer interested in living that hard life. They want their own dose of modernity since they have little access to basic education and healthcare,” says Sonam.

Starting out, Sonam’s impression was that Ladakh didn’t have a rich textile heritage. That was until she came across the textile culture of nomads residing in Changthang.

“We are currently working on our new collection inspired by the Changthang nomads. Changthang is truly the textile haven of Ladakh. These communities are often referred to as nomadic shepherds, but I don’t see why they can’t be called indigenous weavers. They have a deep-rooted weaving tradition from making their own Rebo (cloth that is made of yak’s wool) tents to different varieties of saddlebags, ropes, fabric coverings and carpets that are created from the wool of their own livestock (yak, sheep, goats). Each family, for example, weaves saddlebags with their own trademark design patterns citing that this is their property,” she says.

“More than preserving the pashmina identity of Ladakh, our work is more about creating a new one, and that’s what our new collection will be about,” says Minglak.