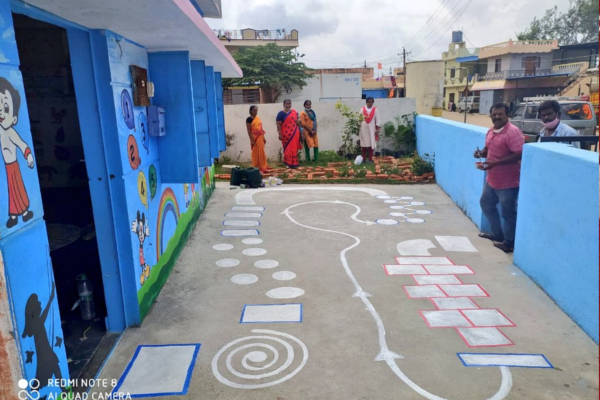 For Sir M. Visvesvaraya’s innumerable services to society, September 15 is celebrated as Engineer’s Day. And in a great tribute to him, a rejuvenation of sorts is happening now in his hometown, Muddenahalli.

As a boy, ‘Vishwa’ had to trudge several kilometres on rocky, dry terrain to reach his nondescript school. He went on to become one of India’s greatest engineers and visionaries, earning a knighthood and the title ‘Bharat Ratna’ among many other accolades.

For his innumerable services to society, the birth anniversary of Sir M. Visvesvaraya, September 15, is celebrated as Engineer’s Day.

But one of his most far-sighted achievements is probably the importance he gave to education and the thousands of schools and institutions that he set up when he was the Diwan of the erstwhile kingdom of Mysore (1912-1918).

And in a great tribute to him, a rejuvenation of sorts is happening now in his hometown, Muddenahalli. 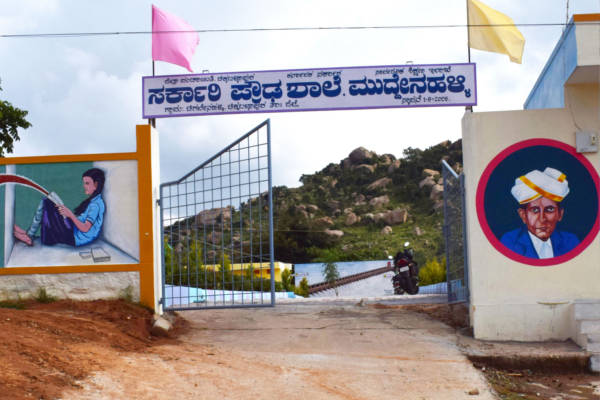 Government High School Muddenahalli in Chigatenahalli village, Chikkaballapur District, is a school founded in 2006 at the foothills of Nandi Hills. It was inaugurated on Independence Day as the first model government school in the district – changing the destiny of many students.

The compound is bright and welcoming, the pathway to the Anganwadi doubles up as a game board, pictures of great English, Hindi and Kannada authors of the past beam down from the walls in the Languages Lab, the ceilings have been painted with stars, and in the Science Lab, Warli art is used to depict the human skeleton, test tubes, rockets and mobile cell towers!

All these creative ideas came from teachers and government officers. The artwork was envisioned and executed by drawing teachers working in government schools in the district.

So how did a modest government school get transformed into a modern, smart school that promises to be a visual and mental treat for its students?

“The result is totally due to the creativity, drive and hard work of our entire team,” says Fouzia Taranum, IAS, and Chief Executive Officer of Zilla Parishad, Chikkaballapur. “We have very good, highly-motivated teachers who come from a merit-based selection process. Together with officials of various government departments, the MNREGA team, the Panchayat Development team and the many volunteers and donors, we came up with a plan to create model schools and anganwadis in each of the 28 Zilla Parishad constituencies. But more schools heard about this, and now we have 38 schools and 50 anganwadis on our list,” she adds. 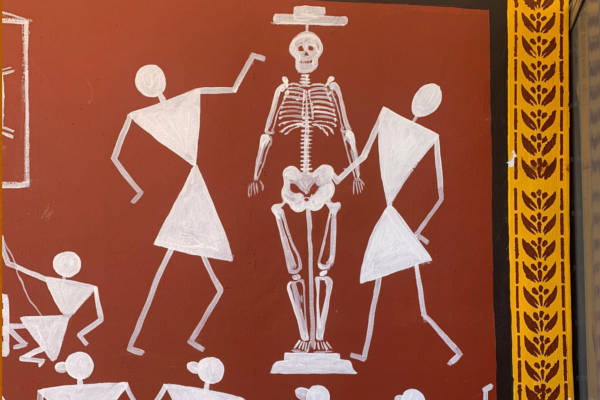 The National Education Policy 2020 emphasises early childhood education in these words: “The learning process for a child commences immediately at birth. Evidence from neuroscience shows that over 85% of a child’s cumulative brain development occurs before the age of 6, indicating the critical importance of developmentally appropriate care and stimulation of the brain in a child’s early years to promote sustained and healthy brain development and growth.”

Even before the NEP was released in July 2020, the Chikkaballapur team had done its survey and drawn up plans to improve the infrastructure of the schools and anganwadis using funds allotted through the Mahatma Gandhi National Rural Employment Guarantee Act (MGNREGA). 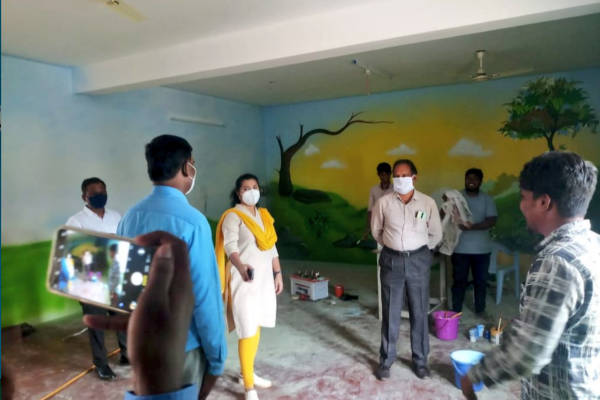 More than improving just the physical space, they wanted to make the anganwadis an energising and inspiring space. High school teachers collaborated to create a manual for anganwadis teachers, a guidebook in English and Kannada called ‘Chinnari Champs’.

The COVID pandemic may be keeping the little ones away from anganwadis and schools. Still, their teachers have been making innovative teaching aids and stocking anganwadis with storybooks and well-made Channapatna toys. Outside, old tyres and eucalyptus wood have been repurposed to build safe and attractive play areas. Moringa, banana and curry leaf plants have been planted alongside herb gardens. The heady waft of change is in the air already. 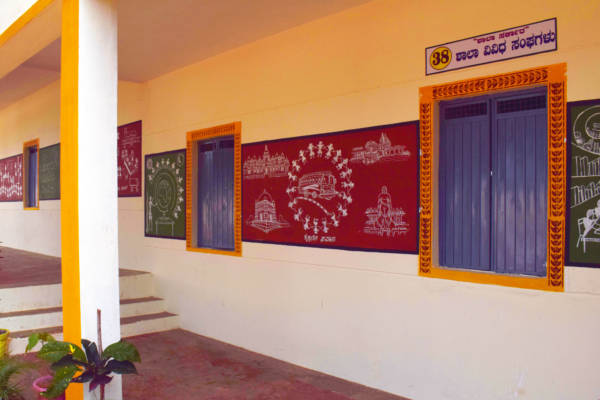 When Fouzia Taranum, IAS Batch of 2015, was posted to Chikkaballapur in August 2019, her focus was on education. The mid-term Class 10 exams showed that the district stood 20th among the 34 educational districts. Teachers and officials sat down to discuss how things could be improved for the 15,000 students who had to write the board examinations in March 2020.

“When I went on field trips, I was very impressed that teachers were working voluntarily during the holidays to help students to prepare for their exams,” says the CEO.

Through the holidays, teachers worked to create helpful worksheets, made home visits, and mentored small groups of students. Students were also taken to the actual centres where they were likely to write their final exams so that they could be familiar with this new setting. The 3000 students who were identified as slower learners were given additional help.

When the results were announced in August, many headlines read: ‘Chikkaballapur district tops in Karnataka Class 10 exams’. 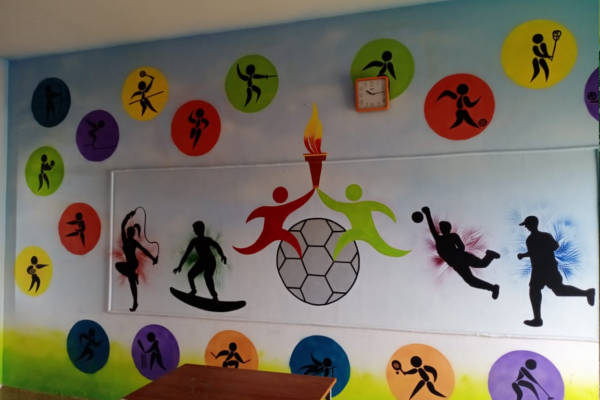 The model school with its spanking new kho-kho, kabaddi and volley-ball courts, well-equipped social sciences, mathematics and science labs, and a serene yoga and meditation room await students. The aesthetics in the Languages Lab is meant to help children develop Listening, Speaking, Reading and Writing (LSRW).

Owing to the COVID situation, students have not yet started coming to school. Instead, they are helped to become self-learners through the Karnataka government’s Vidyagama programme, where teachers meet students in places like community halls, religious places or under trees.

The team had developed the model school on an approach called BALA (Building as a Learning Aid). “But improving infrastructure like building toilets and labs in educational institutions is comparatively easy. We wanted to bring about behavioural change too,” says Fouzia Taranum. 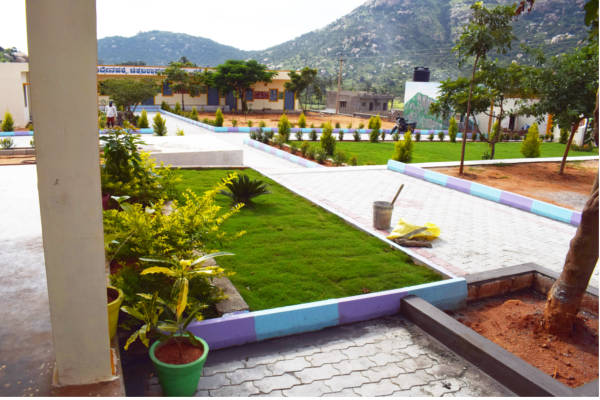 Going by the support received by the Chikkaballapur ZP team from the local communities, the members are confident that change is definitely in the air. They are sure that students will benefit greatly from schools like the model school in Muddenahalli. Maybe, the schools will even give rise to young girls and boys like Vishwa, the boy who grew up to be Sir M. Visvesvaraya!

Mala Kumar is a freelance writer and editor. She is the author of several books for children including ‘Sir M. Visvesvaraya: The Man who Built Bridges, Dams and a Nation’ published by Pratham Books.