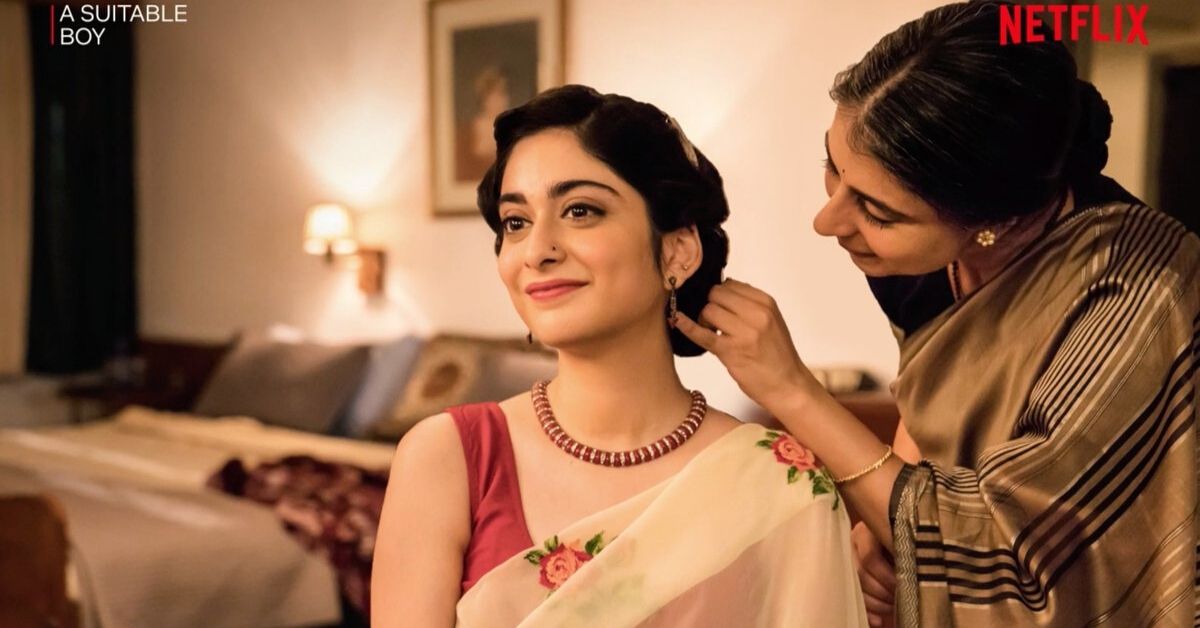 Ever since it was announced that Tabu and Mira Nair are getting back together for the adaptation of #ASuitableBoy, our expectations for the miniseries have been at an all-time high. And this news ‘suits’ us just fine!

“No one can be sure of what the future will be,” is how the new trailer of BBC One series adaptation A Suitable Boy, begins.

Set in newly independent India, the six-part series is an adaptation of Vikram Seth’s 1349-page-long tome of the same name. It seamlessly traces the journeys of four families amid the backdrop of socio-political tensions that were bubbling prior to the first national election in Independent India (1952).

It is also a parallel story of a spirited university student Lata (played by Tanya Maniktala) who much like the newly independent nation, is navigating through the socio-political ridges and contours to carve her own destiny.

Here are five reasons why Mira Nair’s adaptation is a must watch:

Renowned Welsh screenplay writer, Andrew Davies is the man behind the famous 1995 adaptation of Pride and Prejudice. Mira Nair, on the other hand, is an Academy Award nominated Indian-American filmmaker famed for her work in gems like The Namesake, Monsoon Wedding and Salaam Bombay. And, together they bring a promise of visual poetry on screen.

“It is a truth universally acknowledged, that a single man in possession of a good fortune, must be in want of a wife,” is the first line of Pride and Prejudice, which reflects the narrative of marriage and society relevant in both 17th century England and 20th century India (in A Suitable Boy). How the duo skillfully bring it together is something fans of the book would love to watch.

2. Inspiration from Merchant of Venice

What makes A Suitable Boy, an absolute enriching read is its subtle undertone of influences and parallels left for the readers to draw and compare. Sharing one such trivia of inspiration Seth said in an interview, “I thought it was basically just Lata’s story, three suitors, rather like the bearers of the gold, silver and lead caskets in The Merchant of Venice. Out of this I felt something would emerge and it would be a quiet and intimate story. I had no idea it was going to grow to be this monster.”

The author’s book of epic proportions, for the past 27 years, has maintained its indelible mark in the minds of its readers. Hopefully, the series, with a talented cast including Tabu as Saeeda Bai, Ishaan Khatter (Beyond the Clouds, Dhadak) as Maan Kapoor, and Tanya Maniktala in the central role of Lata Mehra, will truly enthral viewers.

As you read about the four families — Mehras, Kapoors, Khans and Chatterjis — you cannot help but remember Austen’s almost mocking portrayal of the idiosyncrasies of the Bennets, Bingleys, Dacrys and Lucases. To watch these heavily fleshed out characters from Seth’s universe come alive in front of your eyes is quite the treat for littérateurs across the world.

Exploring and chronicling concepts of family, relationships, religion, caste, class and identity amid all of it was an epic task Seth had accomplished exceptionally well in his book. Watching Nair and Davies translate these 1300-odd pages on screen is quite a feat the literary audience is eagerly awaiting.

A love story simmering inside a cauldron of drama, action, conflict and tragedy, the TV series, A Suitable Boy has all the needed elements of a good conventional family drama. However, despite the non-fiction garb, its keen emphasis on peeling the multilayered dynamics of Indian society and culture to reveal a recurring story of truth, sans the masala, is what makes it a possible antidote for the conventional saas-bahu serials.

5. A promise of intricate nostalgia

One of Mira Nair’s many talents is to paint nostalgia dipped in visually magnificent scenes. Be it the glimpses of Taj Mahal, old havelis and busy streets straight after the partition and independence of India, much like Seth’s book, Nair’s creation holds the promise of retro nostalgia that period cinema or series are well-known for.

For history buffs or period drama enthusiasts, this series is to lookout for.

A Suitable Boy will premiere on BBC One at 9 PM on July 26, and is set to be released on Netflix later this year.