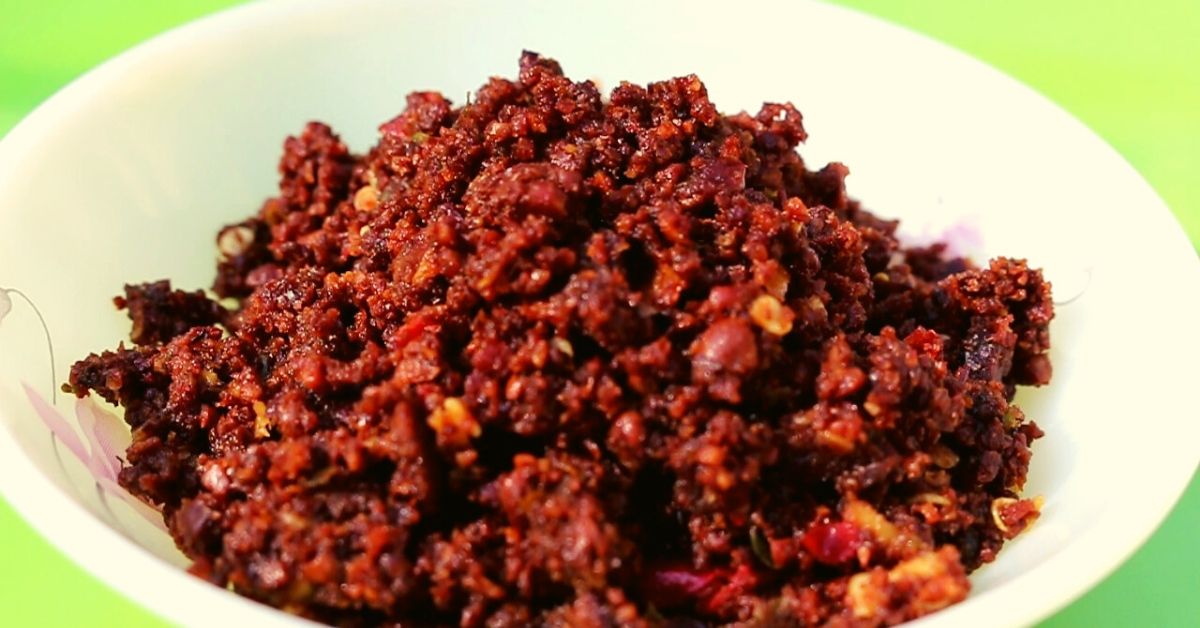 “While studying in Chennai, I was initially scared and embarrassed to cook my home food that had a distinct smell. It’s because of the stereotype associated with our cuisine, as if it’s something dirty or unappealing. I finally decided to break away from that feeling.”

In most families, birthdays are a sweet concoction of colourful decorations, lots of laughter and most importantly, good food. At my home, in addition to the usual cake and other savories, a very crucial part of the celebrations is the cooking of ngapi — a special dish of fermented dry fish paste, consumed with steamed rice. Salty with a pungent aftertaste, it’s an actual treat, but the process of making it might not be so.

Now, being a ‘bangal’ (Bengalis who migrated from Bangladesh during the Partition) family in Kolkata is quite common, and so the quintessential foul smell of shutki maach ( dried fish) wafting through the house is not a problem at all. But the smell while making ngapi, which would often involve smoking it on fire, was quite a bother for the neighbours. Owing to rising demand and greater availability, it is now a common delicacy in most Bengali Buddhist families in Kolkata, but still lesser known among the majority.

Before the cooking began, we would have to make sure every door, window or opening was locked and secure so that the smell could not escape. It still somehow did, which meant answering constant queries and educating people about our cuisine and culture, almost every year, until the questions finally stopped.

A few weeks back, I saw a similar scene play before my eyes in Axone, a film which is currently streaming on Netflix. It opened my eyes to yet another traditional delicacy, that quite like ngapi and has an equally pungent odour, but is a true gastronomic delight.

While ngapi is a Burmese staple that found its way into India and quietly settled into Kolkata’s ever expanding culinary chromosome, axone or akhuni (fermented soybean), is as Indian as any conventional dish like, chole bhature. The only difference is the lack of common knowledge and air of perpetual suspicion around the unknown — something that the feature film portrays in an insightful and sensitive manner.

Axone is a unique delicacy from Nagaland, which is very popular for its distinctive aroma and flavour all across Northeast India and beyond.

A word from the Sumi dialect, axone, a combination of axo (meaning smell) and ne (meaning strong) loosely translates to a dish with a strong smell and is popular for its simplistic yet versatile and flavoursome preparations.

It is both a prime ingredient as well as a condiment, that is used to make a number of curries with pork, fish, chicken, beef, etc, as well as pickles and chutneys. One of the most popular axone dishes is fire-smoked pork with axone and snails.

According to many food experts of the region, being a rice-based culture, axone, a simple yet salty, spicy and easily prepared dish, forms the fulcrum of the region’s diverse cuisine. More importantly, soybeans that can easily grow up to an altitude of 1,500 m, even during the heavy rainfall, makes for an easily accessible protein-rich legume.

Prepared all around the year, axone is made either like a paste or dry. It is first handpicked, cleaned and soaked overnight, followed by boiling until soft yet whole.

Once ready, the excess water is drained out and the soybeans are placed either in an earthen pot or degchi, or bamboo baskets lined with banana leaves. With a cover on it is then left out either under the sun or over the fire, to slowly ferment in the warmth. During the summers, it takes around 3 to 4 days, for the soybeans to completely ferment, while during the winters, it can take almost a week.

Once fermented, the soybeans are then placed in a pestle and smashed with a mortar, although not all the way smooth. These are then scooped and wrapped in banana leaves and left to ferment furthermore. Most of the shops begin to sell it at this stage, and it can be stored and used upto a few weeks. In addition to the smell, the fermentation also darkens the colour of axone after each day.

Many also prepare a drier version of it, by avoiding the mashing step and letting it sun-dry. This form is then fried and used in various powdered pickles and chutneys. This entire process, which is proteolysis of the soy protein to amino acids, is what gives axone its unique umami flavour.

Nambie Jessica Marak, a YouTube food blogger from Shillong adds that in her region, axone, commonly known as tungrymbai is mostly prepared during the winter and is a staple of sorts consumed in an array of versions.

Now living in Chennai, owing to the lockdown, she tells The Better India of her efforts to shed more light into the rich culinary culture of the region. “Almost every tribe in Northeast India has a different local name for axone, and it’s quite beloved. Incidentally, I just prepared a fresh batch a while ago and have put up videos of almost three versions of cooking it on my channel, Eat Your Kappa. I started the channel because I was missing my home food and wanted to show the world the amazing food heritage the region has . Our food is our pride and nothing should force us to believe otherwise,” adds the 30- year-old who is planning to upload a video tutorial on preparing axone very soon.

While researching axone, I came across some interesting histories and mythologies about the food.

For instance, one version tells a story of two girls, when out on the field to work carried nothing but a bag full of soybeans for lunch. When the two could not finish it all, they decided to leave some under the roof of a house. They returned after three days only to find that the beans had turned mouldy with a distinct smell. Intrigued, they tasted it and discovered the delicious undertones of the fermented soya bean.

Another Sumi folktale speaks of this accidental discovery by a domestic help who was sent to the fields to work with nothing but boiled soybeans and rice. Quite bland and inedible, she kept it aside wrapped in banana leaf only to find it fermented with a unique smell and taste, after a couple of days. And then the rest was history.

Whatever be the narrative, every story eventually concludes applauding the exalted flavours of the dish.

However, despite its prominence in Northeast India and beyond, axone along with many such delicacies continues to be shrouded in suspicion and stigma — an outcome of the mainstream “othering” of Northeast culture and heritage, say experts in a report by The Indian Express.

In her research paper, ‘Fermenting Modernity: Putting Akhuni on the Nation’s Table in India’ (2015), Dolly Kikon, a Melbourne-based anthropologist, expounds upon this phenomenon of othering the unknown and other acts of racism that follow — something that director Nicholas Kharkongor’s Axone skillfully depicts.

Referring to the 2007 instance, where Delhi Police in its attempt to tackle the ‘akhuni conflict’ created a handbook, ‘Security Tips for Northeast Students/Visitors in Delhi’, that ‘cautioned’ Northeastern students and workers from making akhuni or other such fermented foods, Kikon draws the parallels between food and politics and how a different smell, taste or culture can create and fume the conflict between the initiated and uninitiated.

“While studying in Chennai, like many even I was initially scared and embarrassed to cook my home food that had a distinct smell. It’s because of the stereotype associated with our cuisine, that as if its something dirty or unappealing. Handbooks like these only promote the lies further. I finally decided to break away from that feeling and embrace it all through the channel and hope that more people do so, be it through the film or anything,” Nambie says, emphasising how food is not just a combination of flavours, it is the soulful testimony of the tongue.

Sharing one of her fondest memories with axone, she adds, “Food brings people together, it doesn’t divide them. I remember, back home whenever we would plan to make axone or tungrymbai, we would end up buying extra packets. My mother’s tungrymbai dish with black sesame seeds and pork chunks was quite famous and there is no hiding when you are cooking this. So, she would end up cooking for almost the entire neighbourhood, and eating it would become a happy community affair!”