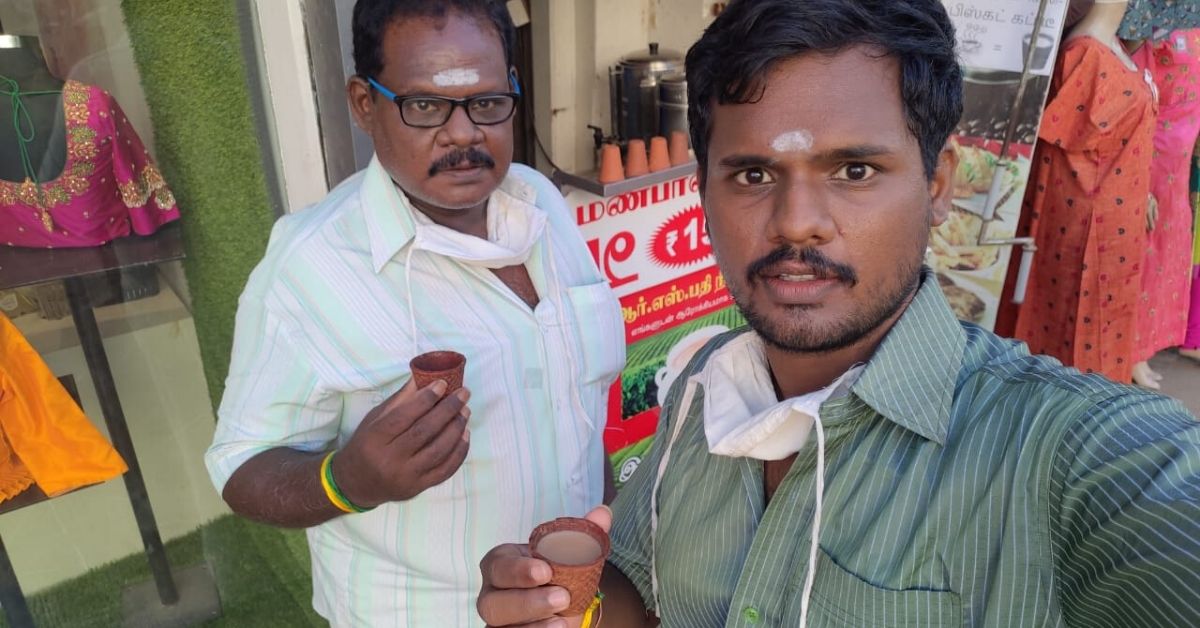 Need a biscuit with your chai? At this tea shop, you can just take a bite of the edible, chocolate-flavoured biscuit cups!

You’ve read about edible cutlery, and the Bengaluru café which serves juice in fruit shells on The Better India. Well, here’s another outlet that has happily adopted the zero-waste and eco-friendly philosophy.

For about a month now, the RS Pathy Nilgiri Tea kiosk, located in Madurai’s West Masi Street, has been selling tea to its patrons in edible cups.

“The cups which are chocolate-flavoured can hold 60 ml of hot tea for a good 10 minutes,” mentions Vivek Sabapathy, the owner. of ‘RS Pathy & Co.’ The tea is priced at Rs 20, and Vivek claims that the shop sells a minimum of 500 edible cups every day.

Eco-Friendly Tea With a Side of History

RS Pathy & Co was launched in 1909 by Vivek’s great grandfather, R Sabapathy, and has traditionally manufactured ayurvedic products such as balms and oils.

When Vivek, a mechanical engineer took over the reins of the company in 2013, he decided that he wanted to do things differently, introduce new products, and expand their customer base. One such product was the RS Pathy Nilgiri Tea powder.

“Our business was already dependent on farms in Ooty and Kodaikanal for eucalyptus oil, and other medicinal herbs. So, I leased some more land in Ooty and hired experts to grow our special brand of tea leaves,” says Vivek.

The tea powder was initially sold at the family-owned ayurvedic outlet in Madurai. When it began to gain popularity, Vivek got the idea to open a tea kiosk next to the outlet, and started selling the tea, along with snacks that were outsourced.

“It was a proper ‘tea kadai’ (tea shop) but we sold only RS Pathy Nilgiri tea. Customers would enjoy the tea, and then walk into the store and buy it,” says Vivek.

Changing With The Times

Business was roaring, but then, in October 2019, the country-wide ban on single-use plastic was issued, and this had a direct impact on the shop because the tea would be served to the customers in small plastic cups.

Vivek had to immediately think of an alternative that was eco-friendly, low-cost, hygienic, and user-friendly.

“We did not choose steel-cups, as they would need some maintenance. Then, I recalled beverages were sold in clay cups (kulhads) across North India, so I approached a local potter to make the cups. I named the tea sold in these clay cups as ‘Tandoor Tea’ and began to sell that to my customers, ” he mentions.

But he was still looking for alternatives, and in March 2020, he came across Edco India, a manufacturer of innovative wafer-based products like ice cream cones and more. They had launched a new product — biscuit cups.

“I spoke with him and ordered a few cups from him for a trial. It was a success, and we immediately placed orders for more,” says Vivek.

Rohan Panmani, the CEO of Edco India, had started the company in 2017, to explore innovative products in the wafer-section, and he worked out a plan to manufacture, and safely transport the fragile one-size cups. “Initially our first consignment was supposed to reach Vivek in March, but it was postponed until June because of the nationwide lockdown. We have also created a special trial and tested method to ensure the cups do not break during transit,” mentions Rohan.

Though the lockdown has slowed consignment deliveries, Vivek has received great response from the customers who visited his store.

Muthukumar and Banu Priya, travel vloggers based in Madurai, visited the store on opening day to try out the biscuit tea.

They say, “ We were already fond of the tandoor tea served in that kiosk, when we heard that they introduced eco-friendly edible cups, we were more than excited to visit it. It was a crisp biscuit that was delightful to have along with tea. Apart from being tasty, it is also an innovative concept to launch in a city like Madurai.”