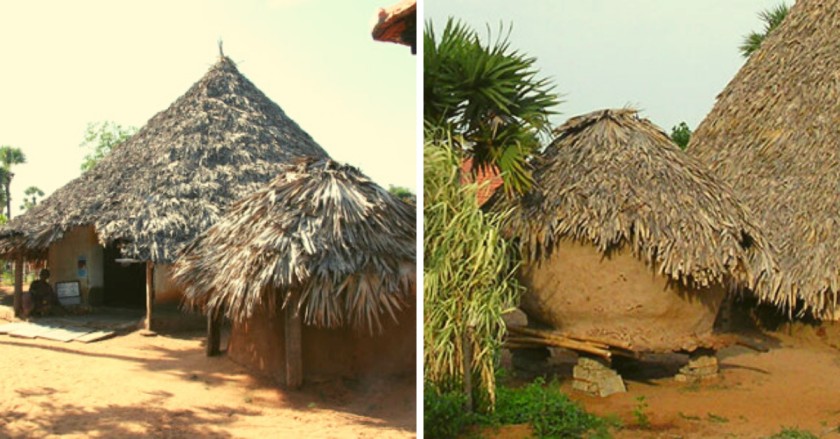 “The solutions for every one of our problems can be found in nature. Similarly, in the case of calamities, nature has its own unique techniques.”

I remember making mud houses as a child using coconut shells as moulds. The unconventional looking, miniature houses came from days when my imagination had no bounds and resources were limited to coconuts. Years later, when I saw the picturesque ‘Chutillu’ huts that the fishermen of Andhra Pradesh make with mud, I was thrilled to bits to find out more about them! These huts, an integral part of the state’s coastal architecture, are made to withstand strong cyclonic winds, a common threat in the region.

To know more about them, I approached Chennai-based Benny Kuriakose one of the first disciples of Laurie Baker – the ‘Gandhi of Architecture’. Kuriakose speaks to The Better India (TBI) about the unique structure of Andhra’s ‘Chutilu’ house and explains what makes the so house resilient against stormy winds.

A Perfect Circle Of Life

“The ‘Chutillu’ (which translates to a ’round house’) is built with mud using the cob wall technique – mixing of mud, water and sometimes straw to create a robust putty-like material. The critical aspect here is to get the right consistency,” shares Kuriakose.

These balls of mud are then placed in rows to build a wall – a process which takes time as the walls are built in stages. “We first build two feet of the wall, after allowing it to dry for a day, we then do the second layer and so on. Finally, we apply limewash,” he adds.

Kuriakose further explains how the rafters, which hold the house together, is made from the Palmyra Palm commonly found in the coastal regions of Andhra Pradesh. The leaves of the same palm tree are dried and used to thatch the roof of the ‘Chutillu’ house.

“Unlike the thatched roofs of huts that are commonly seen, the ones of the Chutillu usually overhangs and almost touches the ground, this is to protect the mudwalls from harsh climatic conditions. Also, the slope of the roof must strictly be at a minimum of 45 degrees as well so that water doesn’t enter the house. For added protection, a flat inner roof made of timbre and mud is constructed before the roof is thatched,” says Kuriakose.

Incidentally, the “Chutillu” house has been included in The Dakshin Chitra Museum – a living museum of art, architecture, lifestyles, crafts and performing arts of South India. The Museum located in Muthukadu, Tamil Nadu recreated 18 heritage homes unique to  South India. The ‘Chutillu’ housed in the museum was built by the residents of the Haripuram village in Yellamanchilli Mandal, Visakhapatnam District, Andhra Pradesh.

Kuriakose was one of the architects who designed the Museum.

From 1975 onwards, Andhra Pradesh has faced more than 60 cyclones including the 1977 cyclone which killed 10,000 people and damaged more than a million houses. During these times, the unique structure of the Chutillu houses has been able to withstand the strong winds saving the lives of many fishermen on the coastal regions.

“Unlike the square-shaped or rectangular houses that we see, these round shaped houses are built in such a way that the wind passes through the house,” explains Kuriakose who has won several awards like the Charles Wallace (India) Trust Award (1986), Designer of the Year Award by Inside Outside Magazine (2002), for his sustainable architecture.

He emphasised the importance of opting for sustainable materials for building homes, especially if it is a calamity prone area. “The solutions for every one of our problems can be found in nature. Similarly, in the case of calamities, nature has its unique techniques of withstanding itself,” he explains.

A sentiment that Aravind Mohan, a civil engineer from Tamil Nadu echoes. The 27-year-old runs a sustainable construction company called ‘Pizhai Azhagu’ and firmly believes that there is a connection between the environment and the homes we live in.

Aravind, who has made several buildings using traditional techniques and natural materials, says, “There is so much to learn from traditional architecture. The most important thing being simplicity. The more we stick to simpler techniques and materials, the closer it will be to nature. Similarly, the ‘chutillu’ homes can withstand the winds to a certain extent because of its simplicity.”

“Opting for local materials like mud, lime, and bamboo is one of the best ways to build houses that can resist harsh climatic conditions. And the best part is that these sustainable homes will have amazing air circulation and are low budget,” he adds.

Learning more about the ‘Chutillu’ houses made me realise the power of finding solutions in nature and trusting tried and tested traditional methods of construction. The knowledge that lies within local masons and artisans is abundant. At such uncertain time when we are experiencing natural calamities in quick succession, it’s essential to put that knowledge into use and adopt sustainable measures even in the urban setting.