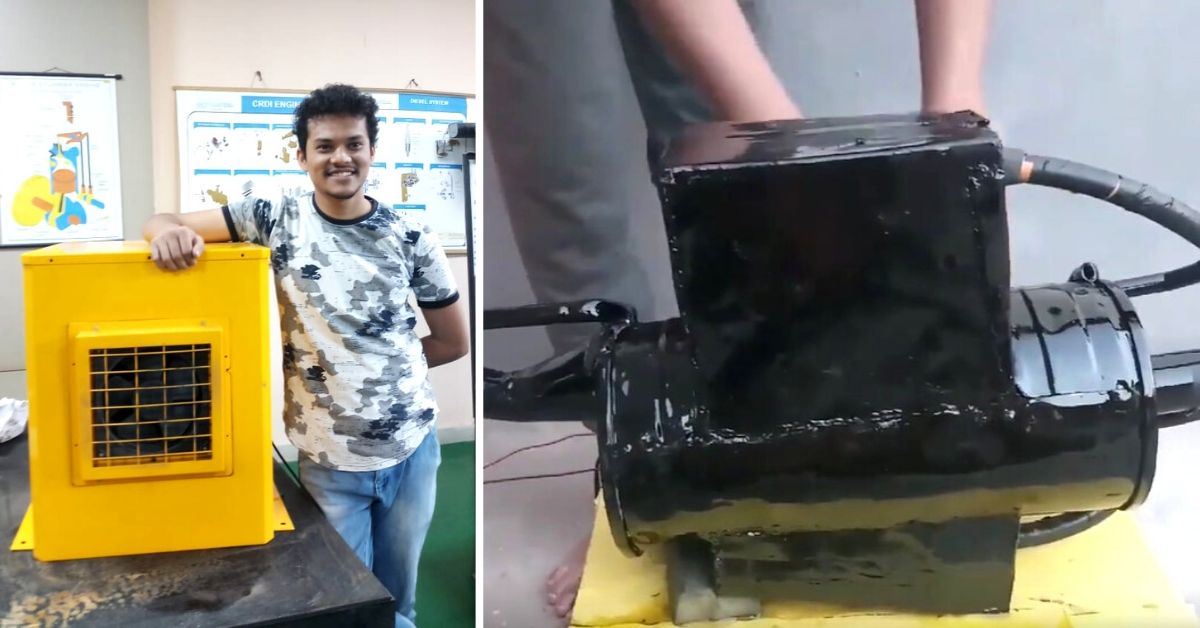 “I began having nasal irritation and breathing issues if I was on the road for some time. I realised that I was breathing in huge amounts of soot unknowingly.” #AirPollution

“I have been trying to design a device that controls air pollution since 7th Standard,” reveals Ashik SV, a 3rd-year student of Automobile Engineering at Dayanand Sagar College of Engineering, who recently succeeded in patenting a cutting-edge device that effectively filters soot & particulate matters from polluted air and renders it safe for breathing.

The young innovator has been quite fixated on creating such a device ever since he saw evidence of air pollution and its harm as a teenager and later as a college student. Ashik had delivered nearly 35 prototypes of the device since then until he perfected the design recently. He has christened the device as P-PAL Tree, recognising the Peepal Tree as a 24-hours oxygen producer.

On a Quest to Fight Air Pollution Since Class 7

In a conversation with The Better India (TBI), Ashik narrates the incident which inspired him years ago.

“It was the last period of the day, our science class was going on. The teacher was explaining the causes of air pollution when I got a little distracted by some noise outside. I stared out of the classroom window and found our principal trying to kickstart his old scooter. Thick black smoke was constantly emitting from the scooter’s combustor. I was quite shocked to realise how much pollution a single scooter can cause,” shares Ashik, who originally hails from Shankarnarayana, Udupi.

Ever since, Ashik had been keenly invested in developing a device that separates the soot or particulate matter (which actually turns it black or thick grey) from the air.

He had also noticed that there were ample air purifiers available industrially and commercially which help in controlling carbon dioxide or carbon monoxide emissions. However, very few purifiers dealt with the major problem of soot or particulate matters suspended in the air.

Suffering with Air Pollution in Bengaluru

“It is this particulate matter that severely affects people’s health, causing fatal diseases like cancer and even affecting unborn children in the mother’s womb. These pollutants are spoiling crops, damaging historical monuments and ruining public health, aside from being a major contributor to global warming,” Ashik explains.

It was his arrival in Bengaluru for pursuing his B.Tech that actually prompted Ashik to accentuate his attempts at designing the particular device. His first encounter with the city had been quite unpleasant due to air pollution.

“I would be having nasal irritation if I was on the roads for quite a while. I was facing some breathing issues as well. I clearly realised that I was breathing in huge amounts of soot unknowingly. I knew it was high time I came up with a functional device that filters soot,” Ashik shares.

Following years of trial and error, he finally found a mentor in Dr Naveen B E, who guided him in arriving at the final design, which was unveiled around a year ago. He has been conducting extensive trials since then. The devices are ready to be installed across Bengaluru shortly, starting from Kadarenahalli Circle near his college.

The Best Features of Ashik’s Device

In one day, the P-PAL Tree is capable of filtering up to 1 crore litres of polluted air. An inlet fan absorbs the polluted air inside the device, following which the air is passed through a series of thin films which traps the particulate matter. The soot particles are then channelled toward a collecting chamber, whereas the filtered air is instantly directed outside. At the end of a six months period, the soot collected in the designated chamber is separated and can be utilised to manufacture printer ink, paint, tyres etc.

“One of the best aspects of the device is that it has extremely low power consumption (around 35-40 watts), almost similar to that of a basic ceiling fan. It works easily at the household voltage limit of 230 volts, and hardly requires any servicing in our experience.”

Interestingly, Ashik’s team has conducted over 150 hours of trial till date with the device and it has delivered flawless results so far!

As of now, Ashik has also managed to design an upgraded P-PAL Tree which is suitable for industrial usage. During a ground visit to the Peenya Industrial Zone, he observed the appalling working conditions in some of the factories, where labourers were exposed to long hours of pollution and heat. The experience prompted him to design the advanced industrial version of P-PAL Tree. He has already supplied bulk orders to asphalt and jaggery factories.

Three months ago, he registered his own company – Panjurli Labs – which engages in the research and manufacturing of P-PAL Tree and other environmental devices. In fact, he is currently working on innovative ideas like bamboo-based air coolers, zero-cost ocean water desalination and unique water purifiers. It is simply a matter of time for the scientist-in-the-making to come up with his next amazing innovation.