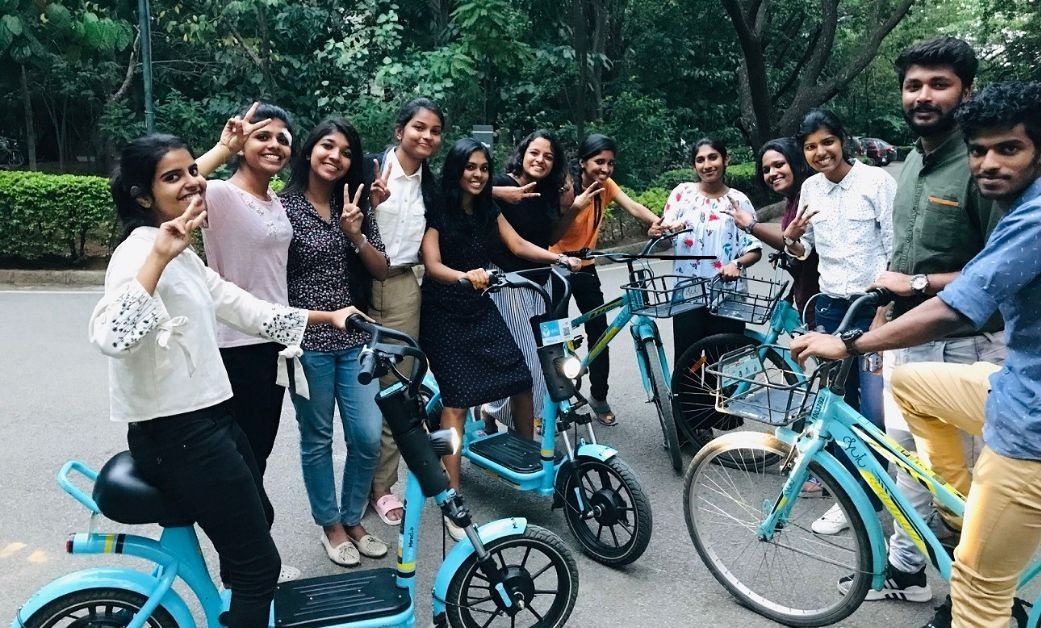 With a fleet of 8,500 bicycles and 2500 electric bikes, Yulu is providing last-mile connectivity while reducing carbon emissions. And, they plan to expand in 50+ cities by the end of 2020!

In the background of an ever increasing fleet of vehicles on the road, air pollution is at an all time high. Harmful components in the air like particulate matter, most notably, PM2.5 is a big cause for diseases like asthma, Chronic Obstructive Pulmonary Disease (COPD), bronchitis, and lung cancer among others. Emissions from vehicles that run on fossil fuels are one of the biggest contributors to the total concentration of PM2.5 in the air.

Want to protect yourself from adverse effects air pollution? Check out these products from our shop that can help you do so!

“Yulu started its operations with an aim to address the rising air pollution and traffic congestion. We want to solve the problem of traffic congestion and air pollution in India using technology. We believe Electric Vehicles (EV) are the future of mobility, for known reasons like good quality of air and our vehicles are setting the trend for EV adoption in big cities of India,” says Amit Gupta, the founder of Yulu.

Yulu as a platform provides “Mobility as a Service” (MaaS) through smaller and efficient clean energy vehicles called Yulu Move and Miracle. Yulu Move are bicycles and Yulu Miracle is an electric bike which functions on a swappable lithium-ion battery introduced in March, 2019. Miracle is designed for urban traffic conditions can reach a maximum speed of 25 Km. A single charge can take the e-bike upto 60 km.

The platform works on a pay-per-use model where, a first time user needs to register on the app with a refundable security deposit. The ‘MOVE + MIRACLE’ plan requires a deposit of Rs. 250 which is refundable.

Since Yulu began its operations in January 2018, it has prevented over 935 tonnes of carbon emissions. This has been calculated by looking at the total mileage covered by Yulu vehicles and what the emissions would have been (based on existing statistics) if that distance was covered by other vehicles that run on fossil fuels.

The Founder and Yulu

Amit pursued his Mechanical Engineering degree from IIT Kanpur in 2000. “It is only now that my degree is being used in some way,” he chuckles.

Amit was one of the core founders of InMobi, a startup which enables users to discover new products and services in the form of recommendations on mobile apps and other devices. He left the company in October 2017 to focus on Yulu.

Yulu provides an eco-friendly UMaaS (Urban Mobility as a Service) which is an affordable and scalable solution of the first and last mile commute to citizens. The vehicles are designed for shared micro-mobility for Indian climatic and road conditions.

In case of the e-bikes, users are billed Rs. 10 at the beginning and Rs 10 for every 10 minutes of usage. While, the bicycle users need to pay Rs 10 for the first 30 minutes and Rs 5 for the subsequent 30 minutes. One can also pause the trip anywhere and keep the vehicle overnight by paying an additional charge.

Rohan Mittal, 33, a physicist based in Bengaluru joined in a discussion with his colleagues over coffee at work. He was tired of the commute and the endless wait for cabs. This is when he first heard about the services that Yulu was offering.

Now, it has been over eight months since he started using the Yulu bicycles. “Have you ever even ridden a Yulu bicycle? It has the most comfortable seat!” exclaims the physicist. He commutes almost 20 kms in a day riding these bicycles and has nothing to complain about.

He says that another reason he likes these bikes is because he loves the design. “They are constantly improving the versions of these bikes and really take customer feedback into consideration. Also, I prefer to take these bikes instead of buying one myself because not only is it difficult to find a good bike but once you buy it, it needs to be properly maintained,” explains Rohan.

Amit emphasises that when they first started out, there was no proper policy framework in place. The government, however, came up with the Faster Adoption and Manufacturing of (Hybrid) and Electric Vehicles (FAME) to facilitate electric mobility in the country along with addressing the issue of air pollution.

Although the startup started its operations in January 2018, it was founded in August 2017. Amit says that this was an important period for the company as they utilised this time to design their bicycles, develop the apps, manufacture and research and development.

The Yulu team quickly identified the challenges and tried to fill these gaps. In case of the e-bikes they introduced this year, they realised that charging stations are something that are not widely and easily available anywhere.

Therefore, they developed a network of mini refrigerators-shaped charging stations in places like tech parks, parking areas, kinara stores to make it easier for customers. Yulu also has about 160 field staff that assist riders whenever necessary. They also designed their own battery packs so that they could have full control the components of the battery.

Amit says that there were infrastructural issues when it came to manufacturing the parts. However, they sailed through this hurdle by setting up bicycle manufacturing units in Ludhiana and Chennai. The parts for e-bikes however, are manufactured in China.

“Our revenue model includes exclusive mobility solutions for corporates. We are building a holistic ecosystem for micro mobility in collaboration with cities, corporates, citizens along with several original equipment manufacturers (OEMs) and policy makers,” says Amit.

The 43-year-old also highlights how they are harnessing technology to solve complex urban mobility problems, enabling the startup in executing their operations ease. Yulu uses IoT, Machine learning & AI and Cloud computing to deliver a seamless experience through a user-friendly app.

“Using IoT as the backbone of the operation, our dockless vehicles can be rented seamlessly on a pay-per-use basis. Users can book a ride via the iOS or Android app,” says the founder.

Since they began in Bengaluru in 2018, Yulu has now scaled up its operations in cities like Pune, Mumbai and Bhubaneswar and has over 1.5 million customers who are availing their services. Yulu now has the largest fleet of bicycles and e-bikes in India with about 8,500 bicycles and 2500 micro-light electric two-wheelers. They plan to introduce Yulu service in 50+ cities by the end of 2020.

“Our goal is to introduce Yulu services in all Tier 1 and Smart cities in India. We expect to be the largest micro-mobility player in India and have one million electric two-wheelers by 2022. We also hope to explore launching this service outside of India by forming strategic partnerships,” says the founder signing off.

You May Also Like: These Kerala Engineers Have Built an Electric Bike You Can Fold & Carry With You