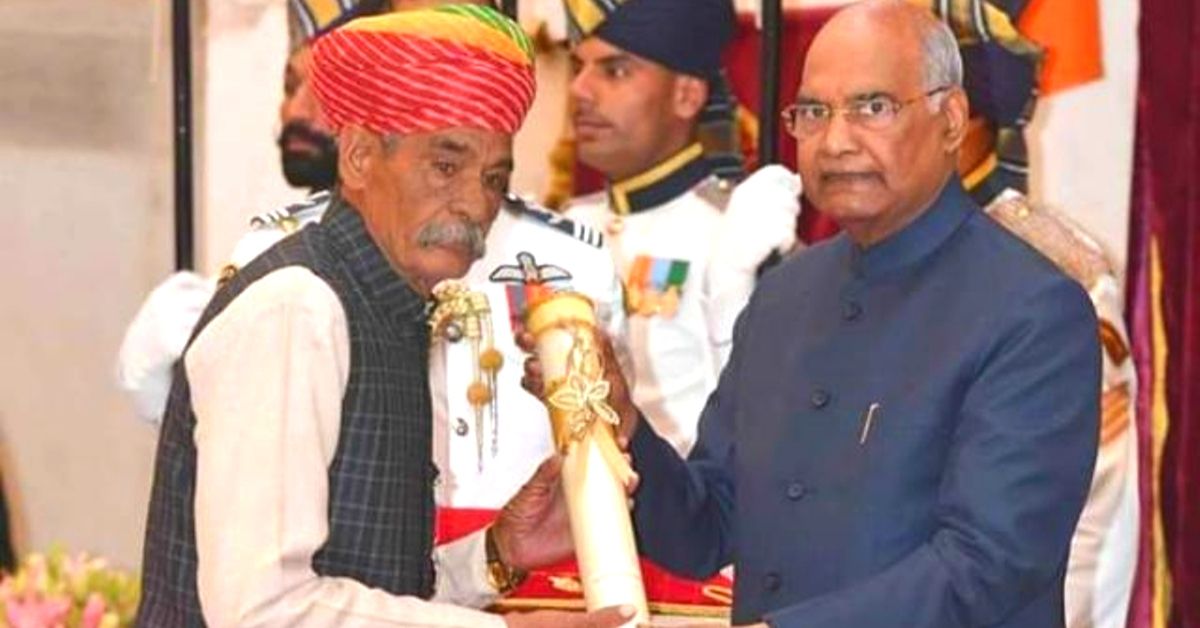 Jagdish Parikh has even presented his unique vegetable varieties to some former Presidents including APJ Abdul Kalam. PS: He has grown a pumpkin that weighed 86 kilos!

Earlier this year, Jagdish Parikh, an organic farmer, was toiling under the sun, when he received a call from the Rashtrapati Bhavan, informing him that he had won the Padma Shri, India’s fourth-highest civilian award.

Without pausing work on in his two-hectare farmland in the Ajitgarh village of Rajasthan’s Sikar district, he continued conversing with the caller, and ended with a simple ‘thank you.’

Wondering how to grow your own vegetables at home? Look no further! Check out different kits by Upaj Farms here.

“I had no clue about the Padma Shri and its value. It was only when I flew to Delhi to receive the award did I realise its significance,” says the 72-year-old.

Now, the humble farmer wishes to add the remaining three awards in his kitty.

“I say this with utmost humility and respect⁠—I want those awards before I die. This is my motivation to continue striving for healthy vegetables and also a way to inspire other farmers to grow vegetables organically.”

Widely known for highly nutritious vegetables that are nothing like the regular ones, Parikh has been an organic farmer long enough to see six Presidents of India come and go, right from Shankar Dayal Sharma to Ram Nath Kovind.

Not only that, he has even presented his unique vegetable varieties to some of the former Presidents including Dr APJ Abdul Kalam, Pratibha Patil, and Pranab Mukherjee.

For instance, the average weight of the cauliflowers and pumpkins that he grows is 15 kgs and 86 kgs, respectively!

Not just that, the ridge gourds on his farm are 7 feet tall (the regular ones are 1.5 feet), the cabbages weigh 8 kgs, and the brinjals he grows are 3 feet tall! 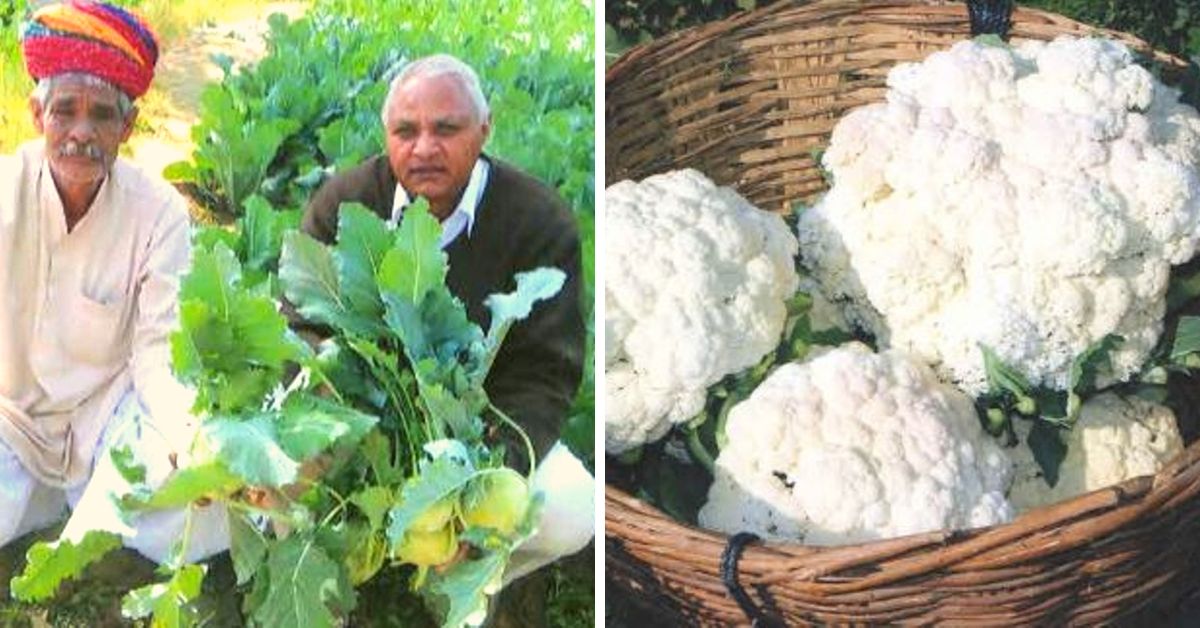 “I use no secret ingredient,” he insists.

The cauliflower variety made him the recipient of the first National Grassroots Innovation Awards conferred by The National Innovation Foundation. It even got him a patent in 2001, which he has named the ‘Ajitgarh variety.’

“I wanted to put my village on a global map, and hence I named it after my janmabhoomi (birthplace).”

Parikh’s tryst with farming began in 1957 when he was merely 10. He would accompany his father and uncles to the market early in the morning to sell the vegetables.

“I would wake up at 5, sit while my family sold the produce and then go to school. This routine went for the next ten-odd years, and with time, my curiosity for growing vegetables increased” he recollects.

After passing Class 12, he joined a college to pursue a BA degree, but could not clear the final year. Even so, he managed to get a job with the ONGC in Assam but returned to his village in the late sixties. 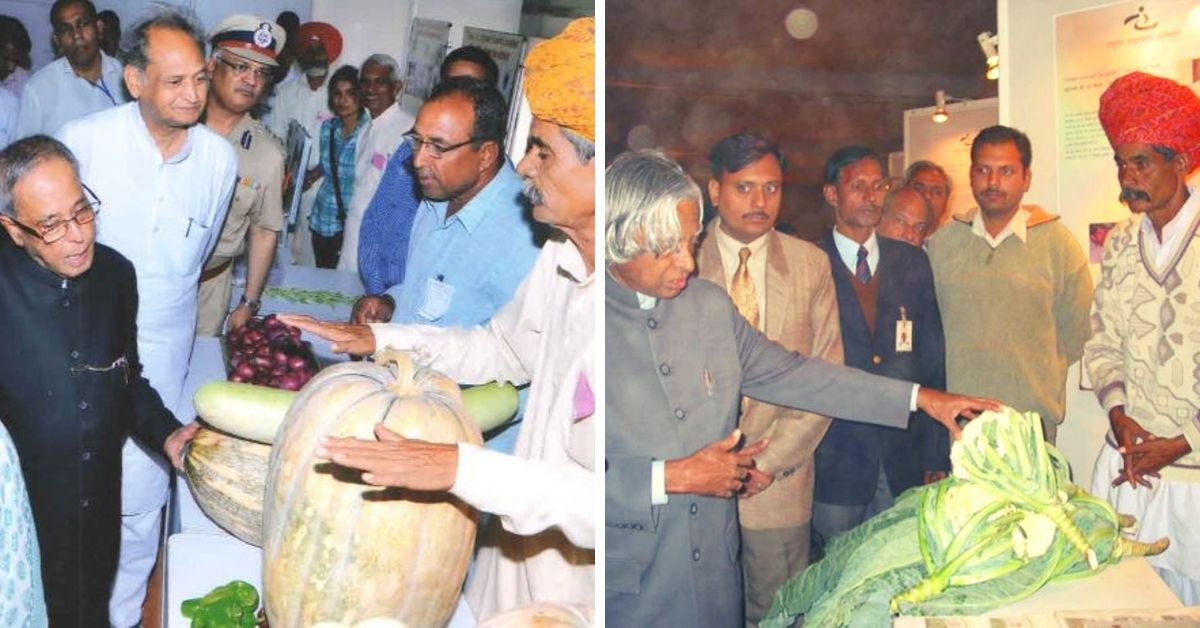 “I was not earning enough, so I returned and joined my maternal uncle on his farm. He is the reason behind all the progress I have made; he taught me the methods to grow veggies sans chemicals and prepare my own fertilisers,” shares Parikh.

He worked with the uncle until his father passed away in 1970, following which he inherited the 2-hectare land from his father and implemented all the organic measures he had learned, on his farm.

The most crucial factors that make Parikh’ farming stand out from the rest are the seeds he uses and time management.

“Do everything on time, from sowing, cultivating to harvesting. Water your plants on time and when necessary. Based on the growth, I water my plants every three days.”

He further adds, “As for the seeds, I suggest that farmers use seeds from their own plants for a better output. I borrowed some seeds from a farm in Jaipur when I started, and that was the last time I used outside seeds. Now, I take seeds from the previous year plant and grow the saplings.”

Parikh maintains a gap of 2 foot between each plant and 1.5 foot between two furrows that allows the rainwater to seep inside the ground properly. This is the reason, he says, why he does not face any water problems in a dry region like Ajitgarh.

“All the wells in our village have dried up to rampant extraction of groundwater for irrigation purposes. I made the furrow with soil to lock the rainwater and prevent any runoff,” Parikh says.

He also makes his own fertilisers to prevent all kinds of damage and diseases.

“I have dug a pit that is 10x6x3 feet deep and dedicated 10 cm of it to collect the animal excreta. Once it is collected, I manually spread it around so that every area is adequately covered, and place neem leaves, cucumber peels and other assorted leaves over this layer. I leave it for 15 days after which manure gets ready,” he explains.

The manure is not only good for the farm but is also cost-effective, “Today’s farmers do not want to spend time on preparing manure but using chemicals to prevent disease is an expensive affair. I have seen my fellow farmers spend up to Rs 4000 per bigha. Whereas the manure comes for free.”

Despite all the hard work and care, Parikh often finds it difficult to sell all his produce. To start with, the vegetables do not shine or look fresh like the ones grown with chemicals. 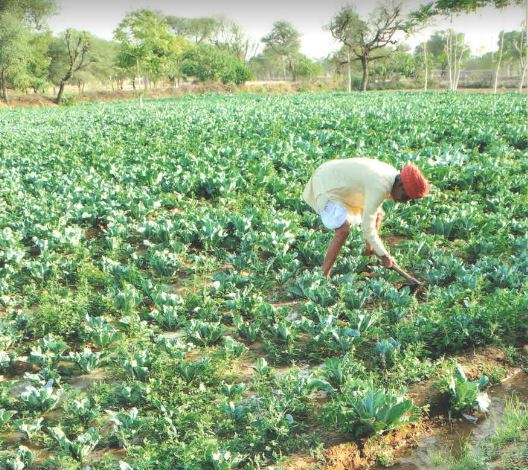 Another reason is the size.

“Because all the vegetables are heavy and tall, one cauliflower or brinjal is enough, and initially a large portion of the fresh produce would be wasted this way,” he mentions.

To tackle the problem of food wastage, Parikh reduced the prices by a significant margin for daily labourers and people from lower economic backgrounds.

“If the market price of cabbage is 40 per kilo, I sell it for Rs 15. This way, no vegetable gets wasted.”

To expand the varieties that he grows, Parikh invites farmers from across the state to his farm. After teaching his farming techniques, he gives every farmer seed samples for free from his farm.

“I started farming ten years ago post-retirement and soon realised the harmful effects of chemicals. I approached Jagdish for some tips and ended up learning how to make compost and even borrowed seeds from his farm. Today, I have stopped using chemicals and quality of output has improved significantly,” says Babulal Gujjar, a retired army man to TBI.

Echoing Gujjar, Maniram Saini, another farmer in the village tells TBI that the weight and size of his vegetables have increased after he applied Parikh’s farm techniques.

The teaching process is not restricted to farmers as he often gets invited to universities, agricultural committees and experts to share his experiences.

According to Parikh, becoming an organic farmer is not rocket science. “A little extra hard work, attention, patience and care is all that is needed,” he affirms.