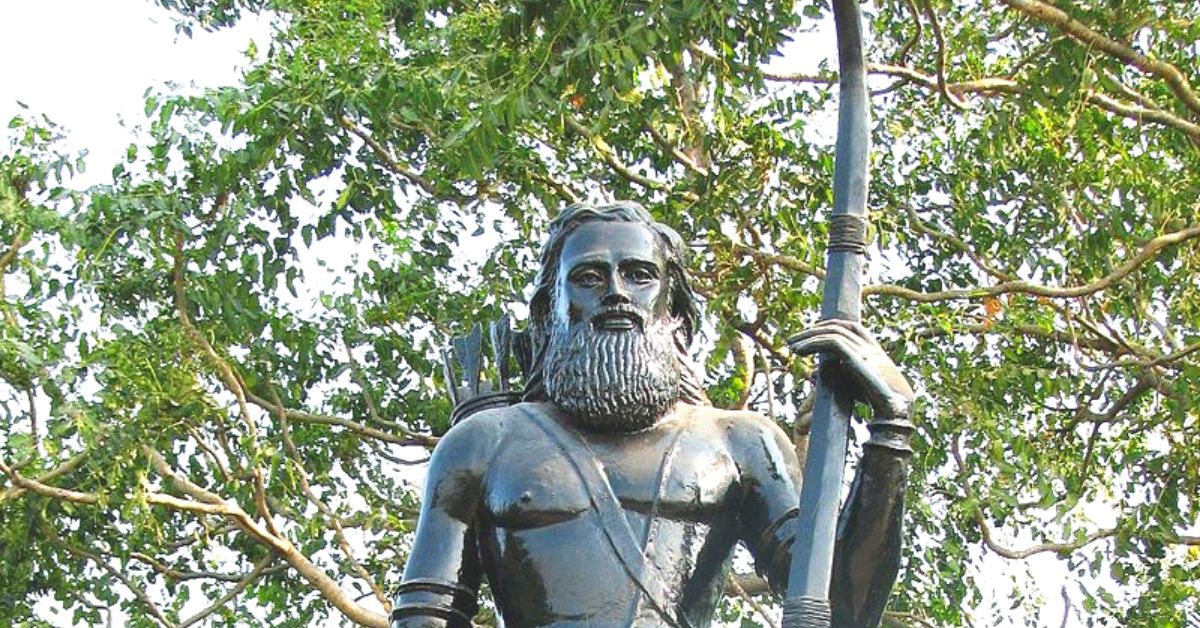 Streaking like a meteor on the anti-colonial nationalist sky, Alluri Sitarama Raju famously led the violent Rampa Rebellion against the British for their imposition of the 1882 Madras Forest Act, which restricted the local tribal community’s access to the forests. #ForgottenHeroes

As the nation approaches its 73rd Independence Day, we bring you stories of #ForgottenHeroes of #IndianIndependence that were lost among the pages of history.

The British had to raise Special Malabar Force trained in guerilla tactics to catch this elusive rebel. The clueless foreigners even attempted to incite or incentivise locals to turn against him and his band of rebels, but nothing pierced the loyalty he incited in them.

Such was the might of Alluri Sitaram Raju, a revolutionary hell-bent on eliminating the British threat.

Right from spinning the yarn to dyeing and weaving the final fabric, this Khadi dhoti is a completely handmade product. Check it out here.

A fierce Gandhi follower, he encouraged people to wear khadi and abstain from drinking, the only Gandhian canon he did not follow was non-violence!

Instead Raju adopted guerilla warfare to bring about a full-scale violent rebellion against the colonial police and army. Raju was a non-tribal who led a tribal rebellion against the British in the forest areas of the East Godavari and Visakhapatnam regions of the Madras Presidency in present-day Andhra Pradesh.

He most famously led the Rampa Rebellion (1922-24) against the British for their imposition of the 1882 Madras Forest Act, which restricted the local tribal community, particularly the Koya tribe, access to the forests to practice their traditional podu agricultural system, a form of shifting cultivation using slash and burn methods.

Instead, the British sought to exploit the forest for its wood. Leading raids on police station, collecting stolen arms and ammunition, and killing British police officers, Sitarama soon earned the moniker ‘Manyam Veerudu’ (‘Hero of the Jungle’).

There is a lack of clarity on Raju’s early life, but the growing consensus is that he was born in Pandrangi village in the present-day Visakhapatnam district of Andhra Pradesh on 4 July 1897. Reports of the time indicate that he wasn’t a very good student in school, but what we do know is that by the age of 18 he had renounced worldly and materialistic pursuits and became a sannyasi (ascetic).

He roamed the hills and forests of the Godavari Agency (before it was split into East and West Godavari districts), where he developed a reputation of a mystic with messianic powers among the local tribal community looking for a way out of their humiliating existence. Of course, there were myths which he created around himself to bolster his reputation, and riding on his growing status and the anti-colonial sentiment, he began leading the charge.

Initially, Raju was keen on adopting Gandhian methods of non-cooperation, asking members of these hill tribes to boycott colonial courts and seek adjudication of justice in local panchayat courts. Although the larger movement died out in 1922, Raju used the momentum of the Non-Cooperation Movement to spread consciousness about the struggle for freedom and desire for change among the tribal community.

Recruiting more locals and earning the sympathy of villages in the area, he grew from strength to strength killing policemen of the colonial regime at ease. ambushing police parties out to hunt this rebel don. By February 1922, Raju appeared on the surveillance radar of the British colonialists. However, they had no idea what was in store for them. The British couldn’t deal with his guerilla style of fighting since they didn’t know how to navigate the terrain as well.

“The first of such attacks was made on Chintapalli police station in the Visakhapatnam Agency area on August 22, 1922, with over 300 revolutionaries under the leadership of Raju taking part in it. Subsequently, similar attacks were made on the Krishnadevi Peta and Raja Ommangi police stations. They snatched weapons and armoury in all such attacks.

A large contingent of Reserve Police personnel from Visakhapatnam, Rajahmundry, Parvatipuram and Koraput were rushed to these areas led by British officers. Two of the officers – Scot and Heiter were killed in battles with revolutionaries on September 24, 1922, and several others wounded,” writes KV Kurmanath, for the the Press Information Bureau.

Unfortunately, in May 1924 the police trapped him in the forests of Chintapalle. On 7 May 1924, he was tied to a tree in Koyyuru village and shot to death by a firing squad. His tomb currently resides in Krishna Devi Peta village, Visakhapatnam district. As per recent reports, the Centre has given its nod to build a statue of this famed hero of the freedom struggle in the precincts of Parliament. His birthday is celebrated as an annual state festival, and a popular Telugu movie was made on his life.

“Raju won the grudging admiration of the British as a formidable guerrilla tactician. That the Government had to spend over Rs 40 lakhs in those days to defeat the rebellion speaks volumes about the success of the Rampa rebellion,” adds KV Kurmanath.

But how many outside Andhra Pradesh know about him?

Very few, I suppose, and that’s why it’s imperative to correct this wrong and ensure that a larger audience across the country is made aware of this legend.

Also Read: Senapati Bapat, The Unsung Compatriot of Gandhi & Bose Who Forged His Own Path