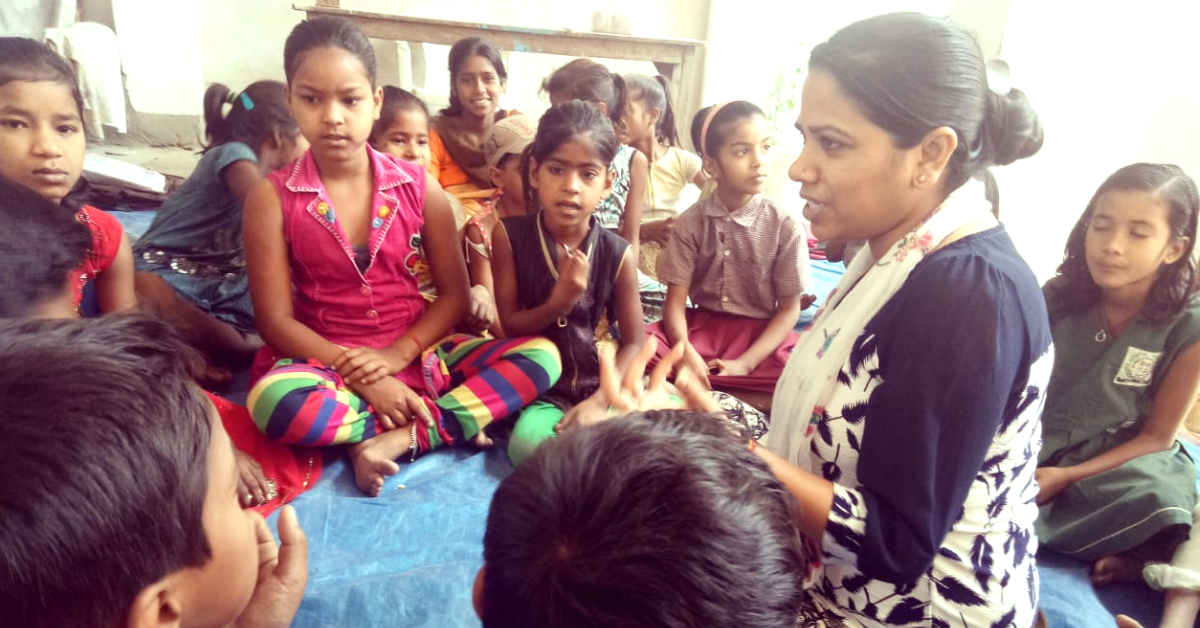 Not one to sit on the sides and complain about the situation, this lawyer-turned-social entrepreneur took control of things and started a school, Topper Study Point (Udaan), for the underprivileged in Hajipur, Bihar.

What’s one of the most delightful memories you have of growing up? Is it being able to live without the burden of worries and responsibilities, perhaps? Not having to think about what consequences your actions might have. While this may be a reality for many, there are children across Bihar who do not have this luxury.

30-year-old Sarita Rai is working with children in Hajipur, a city in Bihar, to help them hold on to their childhood for as long as they can.

With her father being an Indian Forest Service (IFS), Sarita grew up in Northeast India. With roots in Bihar, she visited her hometown often, and every time she visited she was left with a feeling of unease seeing the plight of women and children in the State. There was a time when Sarita started fearing coming back to Bihar because of the regressive mindset of the people. The attitude towards children’s education bothered Sarita a lot.

Not one to sit on the sides and complain about the situation, this lawyer-turned-social entrepreneur took control of things and started a school, Topper Study Point (Udaan), for the underprivileged in Hajipur, Bihar which teaches underprivileged children for free till class 6.

In this exclusive interview with The Better India (TBI), Sarita, an employee in the State Government Juvenile Justice Department (JJD) in Bihar, speaks about the initial challenges, her desire to make a difference, and things that keep her motivated.

What does Sarita do?

The living conditions in parts of Bihar are so adverse that many families make a living off their children’s earnings, who work in factories, helpers in homes, restaurants, and roadside eateries. “I have been working with children in the remote areas of Bihar for over eight years now, and I intend to let these kids get a chance at life. Providing them with an education, in my opinion, is the best way to do that,” shares Sarita.

Recollecting the time she spent in Bihar during her holidays, she says, “I cycled around the town, and still remember the stares it garnered. People could not accept the fact that being a girl I was given so much freedom to cycle around freely. The State is steeped in such stereotypes.”

It was to break such prejudices that Sarita chose to study law, but to bring her vision to life, Sarita did not to take up the many lucrative legal jobs offered to her and became a social entrepreneur.

“A majority of the women and girls do not even step out of their houses. They spend their entire life cooped up inside. They do not even know that they have legal rights,” she says.

How did she start bringing out a change?

Sarita began with conversing with the mothers. “It was a slow process, and in the beginning, a few young girls came up to me and expressed an interest in studying.”

“I started teaching them from my home for free. I would charge a small fee from the boys but nothing from the girls,” she says.

During the almost four years that she home-tutored underprivileged children, she thought of starting an educational institute for the kids. And this was how, in the year 2009, Topper Study Point (Udaan) came into existence.

“The level of poverty and thus, the living conditions are so stark in so many parts of Bihar that to convince the parents to let their children be educated was an uphill task. If a family had three children, and each of them worked, it meant that they all brought in some money. No parent was willing to let go of that income.”

The first step in making this initiative a success was for Sarita to counsel and convince the parents. Gradually, once they started believing in what Sarita was trying to achieve, it became easier to get the children into the school. “I have visited almost all their homes [in Hajipur] and spoken to all of them,” she recollects.

How would you react if I were to say that 13-year-old Rachna thought that it is normal for her father to beat her and her mother up mercilessly after consuming alcohol? This was how Rachna lived until he met Sarita and started attending the classes and sessions at the centre.

“It was only in the third or fourth counselling session that Rachna mentioned that to me. There would be a scarcity of food in the house, and while her brothers and father brought and ate the food, she and her mother went hungry,” she mentions.

It took Sarita almost ten sessions to convince Rachna that what her father was doing was wrong, that she had rights and could very well exercise them.

“Rachna, who is now 15, continues to study at the center, and the change that I have seen in her personality is so heartwarming. She pens down some of the most honest poems and has evolved as a powerful individual,” says Sarita with pride.

What does the Centre teach?

“More than educating them I started with teaching them basic etiquette and manners. They did not even know what the basic hygiene requirements were.”

The first six months are spent in teaching all students about grooming, hygiene, their rights, and making them comfortable with themselves and their surroundings. Though they do not follow any set syllabus, they teach the students enough to ensure grade level competence. Sarita also tries to get the children a seat in an established school after they complete grade 6 at the Center.

How are they funded?

Sarita mentions that she does not get any funding from the government. As of now, it is all private funding where people decide to donate books, stationery, and uniform among others. “I work in the State JJD, and I utilise the money I make from there to run the Centre,” she informs.

Sarita and her able team of 4 volunteers have impacted the lives of more than 2,000 children since inception of Udaan, and the current batch size is 100.

Sarita is working selflessly to bring a change in the system, the outlook, and perspectives of the people. We hope she continues doing the great work that she does and inspires others to do the same.

You May Also Like: How a Couple, Who Moved to a Farm for a Slower Life, Ended up Starting a Village School